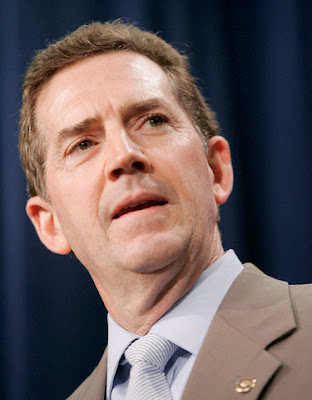 Fallout continues to pile up from last week’s doings at the Senate GOP caucus conference on the fate of defeated Sen. Lisa Murkowski, who opted for a write-in independent campaign after losing a primary race to Joe Miller.

Specifically, an effort by Jim DeMint (R-SC) and David Vitter (R-LA) to remove Murkowski from her position as ranking Republican on the Senate Energy Committee failed in a conference vote on Friday. National Review’s Rich Lowry provides the details:

There were two questions before the Senate conference last week. One was whether to replace Murkowski as vice chairman of the conference. A vote occurred on that question, and she was replaced by Sen. John Barrasso of Wyoming. The second was whether to accept the decision of the Republicans on the energy committee to strip her of her ranking status, which would go to the next in line, Sen. Richard Burr of North Carolina. The senators voted to table this question. So, technically they didn’t vote on the question, but they effectively acted to leave her in place and everyone understood the vote as such.

This was a secret ballot at a closed meeting, so getting senators to be forthcoming about what happened is like pulling teeth. We know DeMint voted against Murkowski. Amazingly, though, we’ve gotten only Inhofe and Sessions (via the Politico) on the record against Murkowski on the committee question. The others either say they support her retaining the committee position, or won’t say. If you’re a conservative primary voter, you’ll want to pay particular attention to those senators who are up in 2012.

The NRO piece contains lots of reasonable-sounding quotes from GOP senators like Lamar Alexander, Orrin Hatch, Bob Bennett and Kit Bond about how Murkowski is still a Republican Senator and even though they all support Miller now the vote was no big deal, the question of her committee assignment is moot and so on.

Vitter, who was not interviewed by NRO, is a bit less diplomatic. Spokesman Joel DiGrado had a more straightforward statement to offer when we caught up with him today:

“Sen. Vitter’s position is pretty simple: Sen. Murkowski lost in the primary and is now trying to undermine the Republican candidate by pursuing what’s best for her own interests over the party’s. She should not retain an important committee position as a result of those actions,” said DiGrado.

It’s clear, though, that the conservatives who are going to provide the Republicans with either a Senate majority or something close to it after November’s elections aren’t very satisfied with half-measures such as that provided by the caucus last week.

The POLITICO piece today outlining DeMint’s unpopularity among the Senate GOP brahmins which used the Murkowski issue as fodder won’t serve to improve matters. DeMint’s efforts at electing true conservatives like Miller, Marco Rubio in Florida, Mike Lee in Utah (who took down Bennett in a pre-primary caucus), Rand Paul in Kentucky (who knocked off Senate GOP leader Mitch McConnell’s handpicked candidate in the primary) and Ken Buck in Colorado have ruffled lots of feathers among the old guard – some of whom have found themselves in his crosshairs. As such, he’s catching lots of javelins.

“I personally think it’s very counterproductive,” said retiring Sen. Kit Bond of Missouri, scoffing at what he and other GOP senators see as DeMint’s apparent attempts to build his national profile at the expense of his colleagues.

Bond, one of the Senate’s worst porkers who is retiring after the elections, and Hutchinson, who reneged on a promise to leave the Senate she made earlier this year while running a failed primary race against Texas Gov. Rick Perry, are perfect examples of why a DeMint is sorely needed – and why many of the establishment types in the Senate will likely face the unwanted prospect of Tea Party barbarians at their gates in 2012 or 2014.

The fact is, the GOP establishment is under as much threat as Democrats in this cycle, and that won’t change anytime soon. With Lee, Buck, Miller, Rubio, Paul, Pat Toomey in Pennsylvania, Ron Johnson in Wisconsin, John Hoeven in North Dakota and Rob Portman in Ohio, plus the possibility of Sharron Angle in Nevada, Dino Rossi in Washington, John Raese in West Virginia, Linda McMahon in Connecticut and maybe even Joe DioGuardia in New York and Christine O’Donnell in Delaware a new group of GOP senators not beholden at all to the Republican establishment will hardly be motivated to cozy up to the Lindsey Grahams and Kay Bailey Hutchinsons.

In fact, perhaps one of the more interesting things to watch after the election will be what effect the new group of Republican senators has on the composition of the leadership and the direction of its strategy. A Senate Republican majority, for example, led by a McConnell willing to go along with the President on “centrist” legislation could well find itself enmeshed in a revolt. And that leadership could find itself under an all-out assault in the 2012 cycle when several GOP establishment types – Hatch, Bob Corker and Olympia Snowe, for example – are up for re-election and could be challenged by more conservative candidates.

This assault would be a good thing. The Republican establishment, for all the success the party is poised to enjoy this fall, is no more in touch with the American people this year than it was when it squandered its majority with irresponsible and vapid governance in 2006 and 2008. But the anti-establishment Republicans – the ones DeMint is cultivating and supporting – seem to have the energy and momentum. It’s perhaps not inconceivable that the new arrivals will be satisfied to be co-opted by the folks who made their rise necessary in the first place, but it is certainly unlikely.