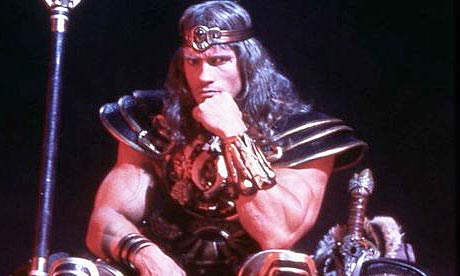 For the last two years, we’ve been subjected to the vagaries of Obama’s climate/energy czar Carol Browner, whose well-documented put-up of a job-murdering and counterproductive offshore drilling moratorium this year has crushed Louisiana’s economy and led to a precipitous decline in domestic oil production.

The word is that Browner is about to ascend to a post as the White House Chief of Staff sometime early next year, where her well-known socialist tendencies and ties to George Soros will make for regulatory hell and widespread corruption in Washington – with Louisiana’s productive economy remaining in the crosshairs.

Browner’s ascension will open up a job in the Obama administration – and an opportunity for the president to “reach across the aisle” and form a “bipartisan consensus” on energy and climate issues. Lo and behold, there’s a ready-made and available candidate to fit the bill.

Enter failed California governor and nominal Republican Arnold Schwarzenegger. The Hollywood action hero told the Los Angeles Times editorial board that he’d love a chance to work in the Obama administration. What’s more, he touted himself for Browner’s job.

Schwarzenegger said his signature achievement – we weren’t sure he had an achievement at all as California’s governor, but apparently we were mistaken – was legislation to “combat” global warming. The legislation, AB32, otherwise known as the Global Warming Solutions Act signed into law by Schwarzenegger in 2006, goes into effect on Jan. 1. It requires California to roll back carbon dioxide emissions to 1990 levels by 2020, which experts say will more or less require all the trucks off the state’s roads in the next ten years. A more destructive bill is largely inconceivable in a state which is quickly collapsing as it is.

But Schwarzenegger thinks he did a terrific thing signing it into law. And he thinks he’s a big wheel when it comes to saving the world.

“I’m a big believer in environmental issues,” Schwarzenegger said, who added that he wanted a post where he could use his “celebrity power … knowledge and experience” to impact public policy. “I’ve traveled the world. … I’m very familiar with the world.”

And Obama started mentioning Schwarzenegger as a potential appointee all the way back in December of 2007, before he even got the Democrat nomination for president.

“What (he’s) doing on climate change in California is very important and significant. There are things I don’t agree with him on, but he’s taken leadership on a very difficult issue and we haven’t seen that kind of leadership in Washington.”

For Obama, whose apparent tack in the new reality of aggressive Republican control of the House of Representatives is to rule by regulatory fiat as much as possible behind the scenes, masking a stealth-leftist agenda with a veneer of bipartisanship, triangulation and a move to the center is the order of the day. An administration full of obnoxious trolls like Tim Geithner, Janet Napolitano, Eric Holder, Browner, Ken Salazar and Ray LaHood could also use a little pizzazz, and a Hollywood actor favored by the Joe Six-Pack crowd the president finds himself in sad shape with is a godsend.

Particularly when that Hollywood actor, who might disagree with Obama on many issues but has fully imbibed the global warming Kool-Aid and was happy to destroy what’s left of his state’s economy betting on it, can be trusted to implement everything Browner is currently doing as her successor.

After all, you can’t get any more lock-step with the Obama administration than this quote from May, when he sank an offshore drilling proposal in the wake of the Deepwater Horizon spill…

“All of you have seen, when you turn on the television, the devastation in the gulf, and I’m sure that they also were assured that it was safe to drill,” he said at a news conference Monday. “I see on TV the birds drenched in oil, the fishermen out of work, the massive oil spill and oil slick destroying our precious ecosystem. That will not happen here in California, and this is why I am withdrawing my support for the T-Ridge project.”

Don’t get carried away into thinking that Schwarzenegger ever really supported offshore energy exploration. Back in 2008, amid public panic about soaring oil prices which even turned GOP presidential nominee and longtime anti-drilling stooge John McCain into an advocate for domestic oil, Ah-nuld was a stick in the mud on the issue.

“California’s coastline is an international treasure,” Schwarzenegger said in a statement today. “I do not support lifting this moratorium on new drilling off our coast.”

Schwarzenegger was quick to acknowledge that the high cost of gasoline, which is selling for an average of $4.58 a gallon in the state, is taking a toll on California even more than other states. Recent national polls show as many as 67 percent of voters believe offshore drilling is a good solution. But Schwarzenegger today threw his support behind conservation and alternative fuels, instead. “We are in this situation because of our dependence on traditional petroleum-based oil,” Schwarzenegger said. “The direction our nation needs to go in, and where California is already headed, is toward greater innovation in new technologies and new fuel choices for consumers. That is the way we will ultimately reduce fuel costs and also protect our environment.”

This ain’t good, folks. Should Obama appoint Schwarzenegger as the newest czar in his menagerie of Romanovs, the same destructive policies currently on offer will remain. But rather than identifying those policies with Browner and Soros, who has pulled her levers for more than a decade, Obama now gets to wrap them in a cloak of faux bipartisan consensus. If “even a Republican like Schwarzenegger” thinks we should “exercise prudence and caution” before “rushing back into the Gulf” for offshore exploration, Louisiana has little chance to recover its oil and gas industry before a new presidential administration takes office in January of 2013.

Interested in more national news? We've got you covered! See More National News
Previous Article Barney Frank Hates Us Breeders, Uses Estate Tax As A Weapon Against Us
Next Article Some thoughts about redistricting