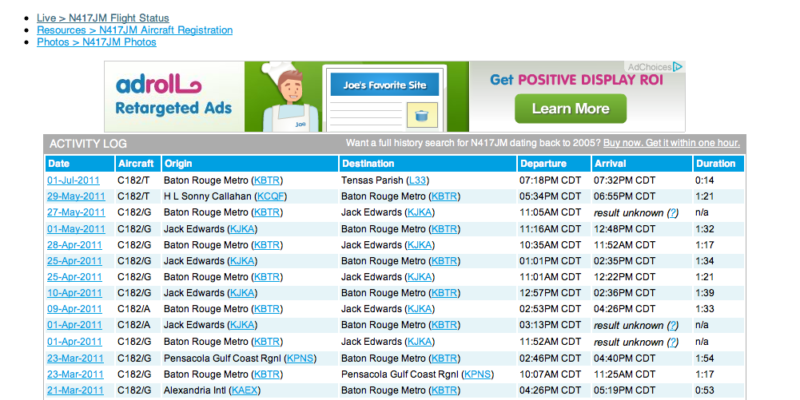 Kip Holden’s true colors are finally starting to show and they sure ain’t pretty. The latest example of Holden’s administration giving the taxpayers the finger comes courtesy of WBRZ, which uncovered some traditional good ol’ boy Louisiana politics:

A private plane was found inside a hangar occupied by Baton Rouge Police for the past two years…. Registration with the FAA comes back to an LLC in Baton Rouge. The names on that business are State Senator Rob Marionneaux and Baton Rouge attorney Sam Ward….

[BRPD Chief Dewayne White] found the plane ended up here last October because of a favor by former Chief Jeff LeDuff, but is still here, he says, because of an oversight at your expense.

“The previous chief had given the owner permission to hangar his plane there because of engine difficulties that he had,” said White, “So it was the previous chief’s assertion to me on the phone today, that this was just for a short period of time until repairs could be made, until the plane was actually flyable, however there were no follow up inspections to ensure that that was done.”

Former Chief LeDuff is getting thrown under the bus for this one, but do you really think he acted on his on accord? Does a State Senator who doesn’t even represent Baton Rouge call up the BR police chief out of the blue and ask to borrow his hangar? Or does that State Senator call up Kip Holden, someone he served with in the Senate for years, and ask his old buddy for a favor? Yeah, I thought so too.

Plus, Marionneaux was allegedly given 48 hours to fix his plane and depart, yet he kept it at the BRPD hangar for nine months. Are you telling me during that whole time not one officer assigned to the hangar reported Marionneaux was ignoring Chief LeDuff’s orders? Are we to believe these officers kept silent and looked the other way? I find that very hard to believe.

However, I would believe it if you told me Kip Holden gave Marionneaux permission to store his plane at the police hangar and then sent word down the ranks to look the other way. This sounds like the Kip Holden we know, the one who rules Baton Rouge as if it were his own fiefdom and the public treasury his own slush fund.

By the way, records show that Marionneaux’s plane has been fixed for months and he’s been flying in and out of Baton Rouge regularly. In the last four months alone, 15 flight plans have been filed, mostly weekend trips to Gulf Shores, AL. If he can afford weekend getaways to Gulf Shores, surely he can afford to reimburse the taxpayers for the cost to hangar his plane on our dime.