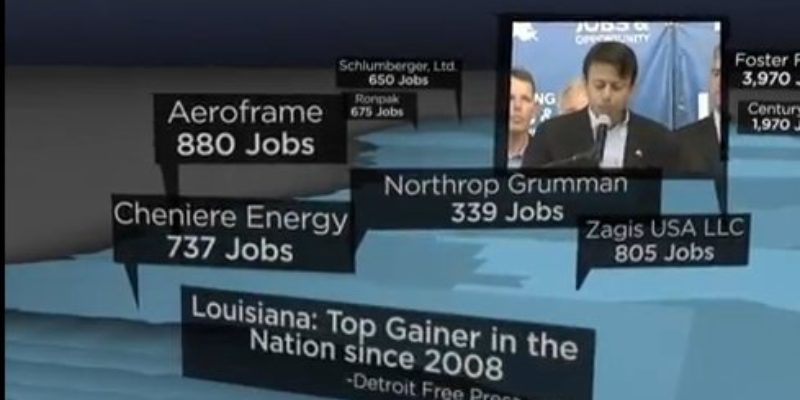 It’s a 30-second spot highlighting all the economic development wins the governor has scored in his first term.

The Democrats, if they ever come up with an announced candidate (more on that in a second), will say that unemployment is up since he’s been governor and so all this stuff is just window dressing. They’ll also note that some of the business types who are making capital investments in Louisiana are donating to Jindal’s campaign and as a result all this is crony capitalism – because to Democrats all capitalism is crony capitalism.

It ought to be mentioned at this point that the most likely Democrat gubernatorial candidate, Rob Marionneaux, said through an aide Thursday that he expected to have results from a poll done by Anzalone Liszt Strategies on the governor’s race over the weekend. Marionneaux has yet to announce those poll results, though we theorized last week that…

Here’s what to expect. Sometime this week or maybe next week, there will be a release out of Marionneaux’s camp with “shocking” poll numbers which indicate that Bobby Jindal’s job approval numbers are horrendous, that his support is soft as a baby’s butt and that Marionneaux polls within 10-12 points of the Governor despite a vast deficit in name recognition. Anzalone will be quoted in the release stating that the numbers show Jindal is beatable, that a good campaign by Marionneaux will beat him and that the opportunity is there to take down one of the GOP’s national rising stars with enough resources.

And Louisiana Democrat Party chairman Buddy Leach and/or executive director Renee Lapeyrolerie will be quoted as saying something about how the state party’s comeback begins here, that they’re nowhere near as dead as people are making them out to be and that Marionneaux has what the voters want – he’s a conservative Democrat who fights like hell for ordinary folks and against all those corporate crony bad guys. All that’s required is for enough Louisiana people to find out about ol’ Rob, and Jindal’s got a real fight on his hands.

But if Marionneaux doesn’t release those poll results by later this week it’s not a terrible assumption that he didn’t like or couldn’t spin what he found, and in such a case it’s entirely possible he might not make a run after all.

And if that’s the case, we might see more ads like this one – but if we do they’ll be more for artistic purposes than out of a need to win a race that hardly needs to be run.