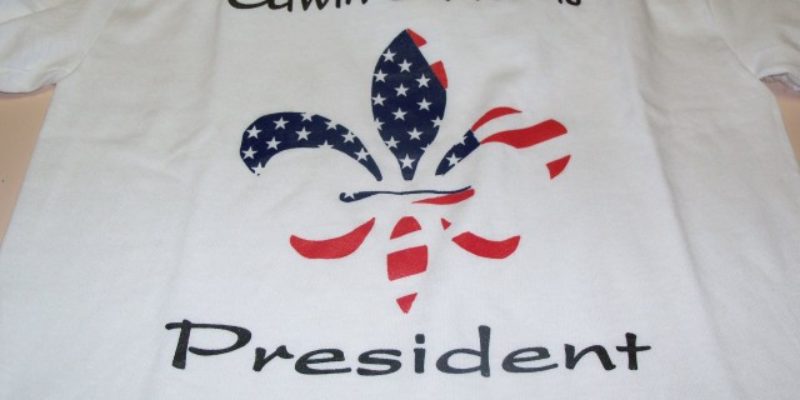 There now appears to be a third wave of post-prison publicity for The Silver Zipper.

The first wave was when Edwin Edwards was released from the slammer, to the news that his toadies in the Acadia Parish courthouse gang were going to install him as Grand Marshal of the Crowley Rice Festival, that he had a new job working for state Democrat party chairman Buddy Leach but not to do anything political and that he’d found a new blonde chippy and he was engaged.

Wave Number Two came when he finished his turn on parole, subsequently got hitched to the abovementioned blonde chippy and threw himself a fundraiser at which the aging sleazebags who supped at his gubernatorial table before the Justice Department condemned the feast gladly ponied up $250 for the privilege of his company, and threw in a press conference at which he proclaimed himself a victim of journalistic malpractice – he wasn’t convicted of selling casino licenses, see, but rather extortion. And by the way he never profited off the people of Louisiana, dontcha know.

That was a couple of weeks ago. Now it appears Wave Number Three is breaking along our receding coastline.

That’s because of a Facebook page which has hit the state’s collective consciousness.

WWL Radio has the story…

An effort is underway to get a presidential pardon for Edwin Edwards. It’s happening on-line as the first step of the process aiming to allow the federal felon to run for governor again.

“I really feel that if I did run, I would be able to get elected,” Edwards proclaimed.

Edwards was asked, “If you had to opportunity would you do it?”

“Yes!” was his emphatic reply.

Supporter Brenda Dolan is trying to help. She started a Facebook page to lobby President Obama for an Edwards’ pardon.

In just two weeks, more than 400 people have signed on to the effort.

“I would think that there would still be a lot of people that would support him and back him,” Dolan said. “He’s loved by so many people.”

“He’s always been Louisiana’s favorite governor,” she explained. “He’s risen from the ashes many time.”

This from the Facebook page, entitled Ask Obama To Pardon Edwin Edwards…

My name is Brenda- i created this fb page because like many other Louisianians we adore our Gov. We believe the good this man has done in La far outweighs why we r asking for a pardon. EWE is a legend, a dignitary, a veteran, a friend, a good man even to those who can nothing for him- he deserves a pardon and the dignity it would bring to his life~

On that page you’ll also find items like these…

Moments ago I requested a pardon for EWE on the White House FaceBook page. My husband is stroke victim/hospitalized and made comment contact uing an unfamilar TV internet service so could not copy/paste it on this group page. A Curtis Piper has responded negatively to my pardon request.

And there was this…

Plan on coming to the International Rice Festival and wearing a shirt because Edwin Edwards is our GRAND MARSHAL.. wouldnt it be great for him to see a bunch of supporters in a shirt like this,,, message me if you want one!!

And here’s the shirt… 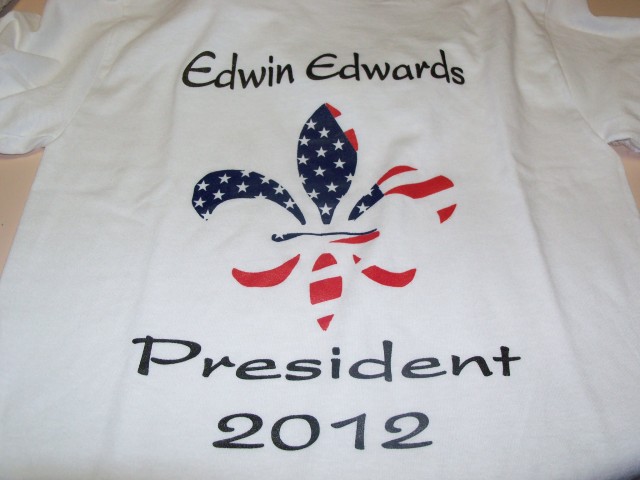 Strangely enough, there was no discussion on the page that touting the 84-year old ex-con for president might be a little counterproductive in asking the current occupant of that office, who will be running for re-election next year, to pardon him and thus make him eligible for elected office.

Apparently that’s a level of sophisticated thinking which hasn’t descended on the 426 people who have joined the page.

And that’s a surprise, because one of them came up with this golden nugget…

And we have this example of shockingly poor Facebook etiquette…

There’s a great deal more, but it’s a little depressing. Thankfully, the reaction to this hasn’t been completely positive… 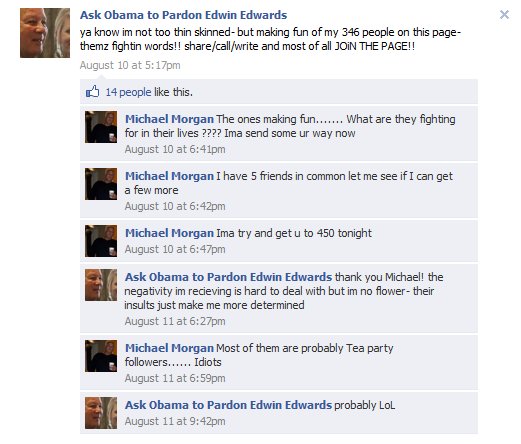 This doesn’t particularly represent a groundswell – 426 people in two weeks is actually a fairly pathetic showing for something billing itself as a serious public undertaking – but it’s worth shining a little daylight onto.

Because if you ignore stupidity, it grows like a fungus.

Besides, it’s funny to watch the imbeciles.