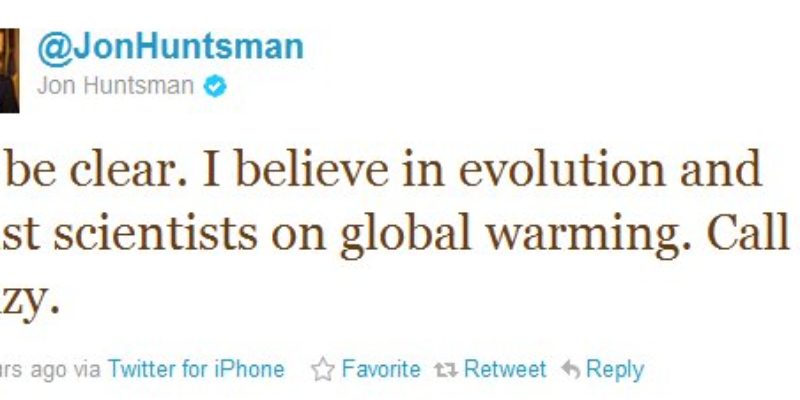 Earlier today there was this…

We’re not going to call you crazy. We’ll just call you a Democrat and leave it at that.

The thing about Huntsman is that he’s fundamentally misread what the Republican electorate is looking for. They’re not looking for Obama Lite. They’re looking to find somebody as far away from Obama as possible.

Which made Huntsman completely untenable as a candidate to begin with. He served as Obama’s ambassador to China, after all, which made him no more interesting to Republican voters than Robert Gates would have been. Huntsman’s only way to curry favor given that would have been to enter the race by talking about how dangerously dysfunctional and moronic the administration is and how we’re losing the geopolitical game to the ChiComs because of it. Had he done that he might have brought something to the table. Instead, he was Mr. Milquetoast – and there’s already a better-qualified candidate for that role in the field in Mitt Romney.

And in the face of all the evidence that global warming is a scam cooked up by the Left to revive the dream of a socialist utopia and fed by eager self-serving scientists in search of grant money, evidence which has been pouring out in a flood since the East Anglia University e-mails were released and Climategate exploded onto the public consciousness, Huntsman opts via Twitter to use global warming as his medium to trash Rick Perry – who has 29 times his support in the latest poll?

It’s not just that Huntsman is too far to the left to attract any support from Republican voters this year. It’s that his campaign isn’t smart. The wording of that tweet which says he “trusts scientists on global warming” couldn’t possibly be worse. Does he trust the scientists who doctored the data in order to offer false proof of global warming? Does he trust the scientists who conspired to keep alternative theories differing from the anthropogenic global warming orthodoxy from being published in peer-reviewed journals?

Or is it these scientists Huntsman trusts?

If he does, he’s too dumb to be president. If he doesn’t, what’s the point of the tweet?

Huntsman would do us all a big favor and get out of this race. Gary Johnson would be a lot more interesting participant in the next debate.