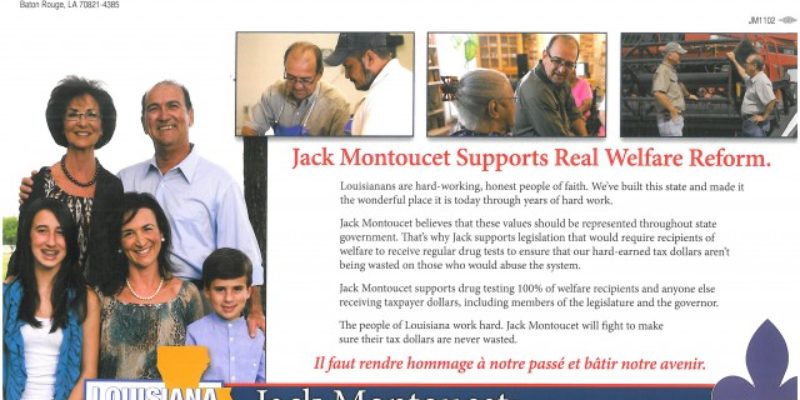 As we move closer to the two-weeks-out line, the attacks in the state’s legislative races are getting sharper.

And there’s a theme building, particularly in the case of races where the candidates are of the same party. It’s not a new theme – if you don’t have a compelling issue to run on, you call the other guy a crook.

But if your opponent is in the other party, and particularly if that other party’s name starts with a “D,” you can call him a liar. And you can often find evidence to support your contention.

In perhaps the highest-profile Democrat-vs-Republican House race, GOP challenger Anthony Emmons is clobbering Democrat incumbent Jack Montoucet for a mail piece the Democrat State Central Committee sent out to households in House District 42. The piece, which touts Montoucet’s tough line on welfare, appears to be rather patently dishonest – and Emmons has jumped on it. 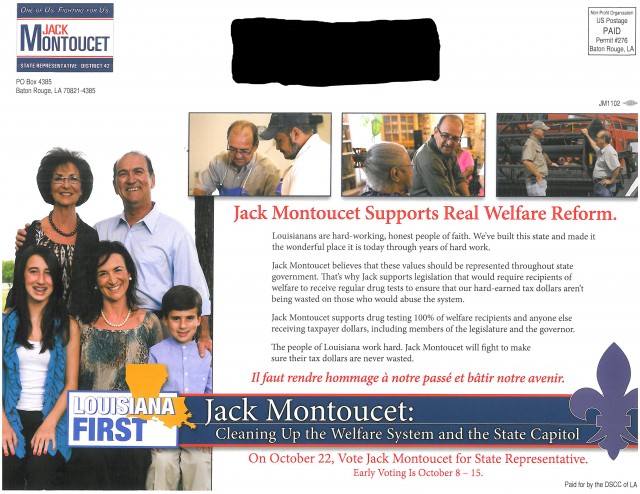 And specifically there’s this line…

Emmons’ camp is more than a bit miffed at that line considering that in the final vote on HB7, which was the bill by Rep. John LaBruzzo that would have imposed drug testing on welfare recipients, Montoucet voted against it.

There are a few explanations for this conflict. Montoucet would likely say that he thinks Gov. Jindal ought to be drug-tested alongside the welfare recipients and that’s why he voted against LaBruzzo’s bill. Or maybe the folks from the DSCC, who aren’t the sharpest knives in the drawr, weren’t aware of Montoucet’s vote on HB7 when they threw out that line in appealing to the folks.

Or there’s the one Emmons’ camp is pushing, which is that the mailer was a straight-up attempt to deceive the public. Emmons has been decrying Montoucet’s attempts to cast himself as a conservative from the outset of the race, and this would certainly lend weight to that narrative.

And in another of the state’s prominent inter-party races, Democrat senate candidate Gary Smith has a rather opulent mail piece out that touts his conservatism – and that has opponent Garrett Monti and other Republicans spluttering with indignation. 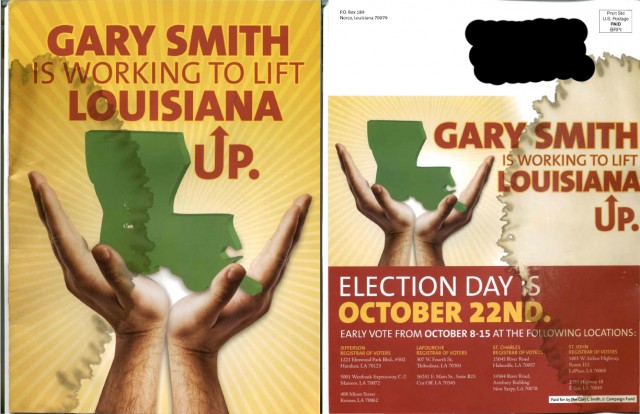 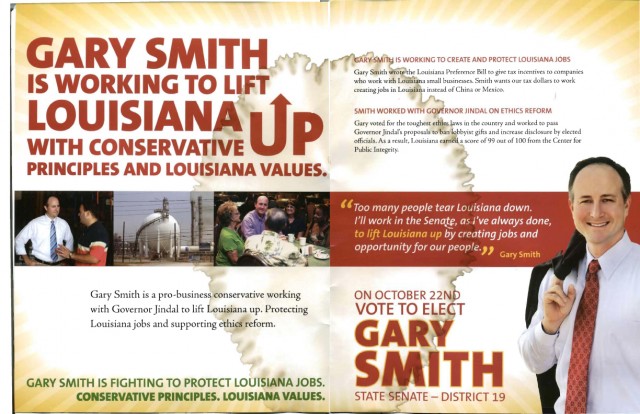 The complaint is that Smith is calling himself a conservative when his voting record doesn’t particularly reflect such a designation. For example, the Louisiana Association of Business and Industry, which offered a dual endorsement of both Smith and Monti, scored Smith just a 46 out of 100 for his voting record over the past four years. A 46 score on a conservative index might not be so bad for a Democrat in Congress, but in the Louisiana House of Representatives it’s not so good – in fact, only 10 House members scored worse.

There’s another problem with Smith’s mailer – namely, that on two separate occasions it touts the fact that he’s working with Gov. Jindal. Except that Jindal has endorsed Monti in this race, which didn’t exactly make it onto the mailer.

And then there are the GOP-vs-GOP races.

There’s a rather explosive charge being levied at state senator Jack Donahue this week surrounding his involvement in The Groves, a mixed-income affordable housing development in St. Tammany Parish which was funded in part by a federal Community Development Block Grant and built by Donahue’s construction company. A PDF file is circulating among Tea Party folks alleging some cozy dealing behind the development, involving legislation he sponsored to facilitate it and a number of other factors.

Donahue is considered a heavy favorite over challenger Gary Leonard in District 11, but Leonard’s camp believes they have an issue to exploit with the Groves. Time will tell.

And in District 64, Barry Elkins has now hammered his opponent Valarie Hodges over what Elkins’ camp says is a campaign finance violation…

Valarie Hodges, candidate for State Representative District 64, appears to have made a major campaign finance violation by paying an immediate family member for campaign work.  According to Ms. Hodge’s 30 day finance report filed on September 22, 2011, she made a $1,200 payment to her daughter, Kellie Hodges, for “contract labor” on September 12, 2011.

“Whether Ms. Hodges knew about this law or not isn’t the point. How can we elect somebody to write and pass laws when they can’t follow the existing laws?” asked Barry Elkins, opponent in the race for House District 64.  Elkins went on to add, “Furthermore, what does it say about a person that thinks it is okay to divert money raised in a campaign to a member of their immediate family who lives in their household?”

Indeed, this raises the concern that someone who cannot follow laws may be sent to the State legislature to assist in the making of laws.  Furthermore, her attempt to redirect funds back to her own family elicits additional ethical breaches.

Hodges’ disclosure form was later amended to reclassify her daughter’s work on the campaign as an in-kind contribution.

Whether Kellie Hodges’ temporary job becomes an issue of note in what’s being called a close race is a good question.

There was an error made when my campaign report was filed by my accountant. We have since filed an amended report with the State, correcting the mistake.

There was absolutely NO check written or cash given to any family member from my campaign funds.  An in-kind donation that we made personally to my campaign was mistakenly reported as a campaign loan. It is a simple clerical error that has been corrected with the State. This is much-a-do about nothing.

Interested in more national news? We've got you covered! See More National News
Previous Article JMCEL’s projection of statewide voter turnout
Next Article This Is A Hard Poll To Believe, But It Tells Us Something Anyway