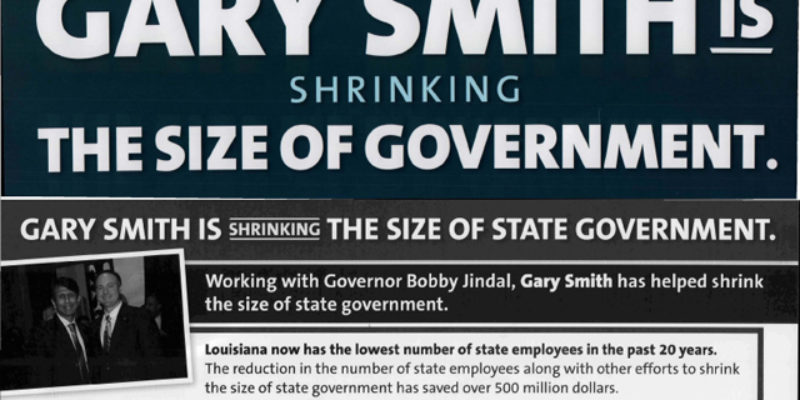 We’ve covered the race for Senate District 19 quite a bit so far, and we’ve noted a somewhat unusual campaign tactic of the Democrat in the race. Specifically, that Gary Smith put out a mailer tying himself to Louisiana Gov. Bobby Jindal in an attempt to cast himself as a conservative despite his party affiliation.

It turns out that Smith’s mail piece was only one part of a comprehensive campaign strategy attempting to glom onto Jindal and ride the governor’s coattails to election over Republican Garrett Monti. There’s a TV spot now running to that effect… 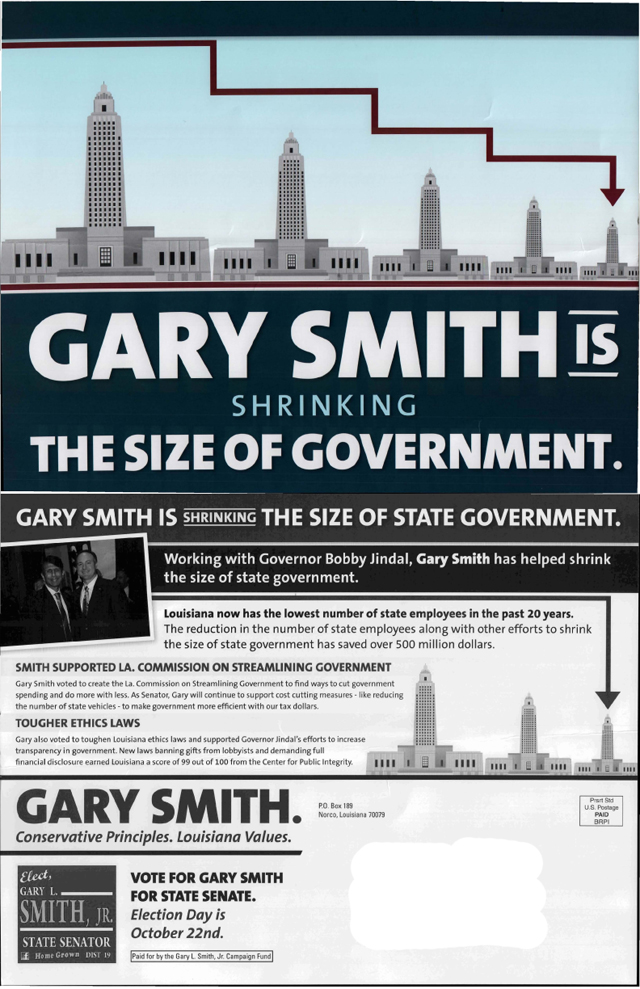 This is all terrific, except there’s one problem.

Maybe Smith isn’t aware of the fact that though he’s based his entire campaign on the idea that Jindal loves him and thinks he’s swell, Jindal’s actions indicate otherwise.

Or maybe Smith knows that pretty well – but he just doesn’t want the voters in District 19 to know it.

It does come off as a pretty stunning example of dishonest campaigning, and a rather pathetic statement about Louisiana Democrats that in order to get elected to a seat which has never been Republican Smith has to deceive voters into thinking he’s a Republican and a Jindal protege in everything but name.

Smith’s latest campaign disclosure form reveals that he just loaned himself $300,000 – for a state senate race! – along with a host of contributions from folks like Rob Marionneaux, Harry Morel, the St. Charles Parish DA who mentored outgoing current District 19 senator and Senate President Joel Chaisson and is stepping aside next year so as to open the door for Chaisson to replace him, and some company in Harvey named “Riverbirch, Inc.”

The Democrat consulting firm of Ourso Beychok is responsible for Smith’s mailers touting his unrequited love affair with Jindal.

UPDATE: Monti now has a radio ad out which has Jeff Landry questioning Smith’s conservatism – and mentioning that Jindal supports Monti.

Interested in more national news? We've got you covered! See More National News
Previous Article Nothing Good Comes From Russian Roulette
Next Article All Kinds Of Stuff Going On In Lt. Governor’s Race