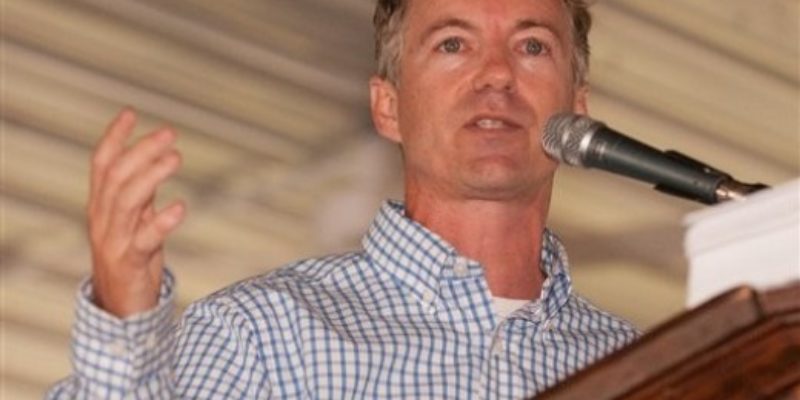 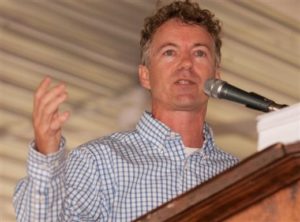 In case you were wondering, Kentucky Sen. Rand Paul is not supporting Newt Gingrich for president.

Paul, a tea party-candidate who was brought to office in 2010, has penned a letter that appears in this morning’s Des Moines Register explaining why he believes Gingrich doesn’t need to be supported by the tea party.

Besides the obvious reason Paul wrote the letter–I wonder who that candidate that he wants to elect “who will defend the ideas of constitutional conservatism and limited government” is?–he makes a pretty good case against Gingrich’s tea party credentials:

While conservatives and limited-government activists did, indeed, make great strides in 2010, those could easily be set back by nominating someone with a different set of ideas and values in 2012.

Let me start with something important. I have two goals for 2012:

I want to prevent the European debt crisis from consuming America next.

I want to elect a president who will defend the ideas of constitutional conservatism and limited government.

Unfortunately, while all Republican candidates would be an improvement over

the present administration, two of the current frontrunners simply do not represent the tea party, the conservative movement, or the type of change our country desperately needs in 2012.

Let me begin with the most obvious reasons:

Both Mitt Romney and Newt Gingrich supported the outrageous $700 billion Troubled Asset Relief Program, or TARP, bailouts — “one of the most unpopular government programs in American history,” even according to President Obama’s own Treasury Department.

Both Romney and Gingrich have

have been outspoken and unapologetic supporters of the individual mandate. This is the heart and soul of ObamaCare.

Since the tea party started as a reaction to Republicans who voted for TARP, and was strengthened into a national political force during the fight over ObamaCare, I believe this disqualifies both Romney and Gingrich from tea party support.

Not only that, but because the single biggest tasks of our next president will be to right our economy and undo President Obama’s signature health care scheme, can we really afford to nominate a candidate who doesn’t have a leg to stand on when it comes to critical issues such as TARP and ObamaCare?

Moving past both those issues, however, I believe Romney’s candidacy is well-established. He’s a moderate, northeastern, don’t-rock-the-boat Republican, and I think everyone in the party clearly understands that.

But what worries me is that the voters are being sold a bill of goods in Gingrich.

Gingrich began his career as a Rockefeller Republican from the liberal wing of the party. And though he has often spoken and occasionally acted like he left that wing, it is clear from his flip-flops and multiple “apologies” that his heart is still there.

His record features “highlights” such as global warming commercials with Nancy Pelosi, support for cap-and-trade, funding Planned Parenthood, and, recently, announcing that life does not begin at conception.

Not only that, but Gingrich took money as a Freddie Mac lobbyist — one of the well-known government-backed agencies that served as a root cause of the financial meltdown of 2008.

While one candidate in the race, my father, Rep. Ron Paul, was

publicly warning about Fannie Mae and Freddie Mac and the crisis they were helping to create, Gingrich was earning millions to not only endorse but also promote the status quo.

One group of Gingrich’s also took in nearly $40 million promoting big-government ideas, such as the individual mandate.

His lobbying and promotion of the housing crisis and the health care mandate have helped to make him a wealthy man, but they have also put him outside the conservative mainstream on most issues.

While in Washington, Gingrich also refused to stand up on right-to-work laws and Second Amendment battles. He supported the Brady Bill and the Lautenberg rifle ban. He voted to create the U.S. Department of Education.

Gingrich will tell how he helped balance the budget and voted for President Ronald Reagan’s tax cuts. So did many Democrats. Those two acts do not excuse the long and exhaustive list of things where Gingrich or other big-government politicians have gone against the principles of the conservative movement both in and out of Congress.

My concerns aren’t limited to the distant past.

In the race that helped launch tea party electoral activism in 2009, Gingrich earned the ire of conservatives nationwide for his endorsement of the liberal establishment Republican in a New York congressional race, just as the conservative, Doug Hoffman, was set to win. Gingrich returned to his Rockefeller liberal roots to support the candidate who favored abortion, and who was anti-right-to-work, anti-gun, and anti-family values.

Once Gingrich’s endorsed liberal Republican candidate realized she had no chance of winning, she chose to endorse the Democrat in the race instead of the conservative, Hoffman.

So much for Gingrich’s desire to put political party over principle. In the end, both lost.

This list could go on. So I will conclude by saying two things: Gingrich is not from the tea party. He is not even a conservative.

He is part of the Washington establishment I was sent to fight. He has been wrong on many of the major issues of the day, and he has taken money from those who helped cause the housing crisis and create millions of foreclosures.

What establishment politicians like Gingrich don’t understand is that the Republican Party wins when it stands up for what it believes in, as many of my new colleagues did in 2010.

We also win when we effectively run against big government. We cannot do that if we nominate a candidate who has both embraced it and been enriched by it.

We have a choice to make in a few weeks. If the tea party is to continue the work we resolved in 2010 to undertake, then we must not make a giant leap backward by electing big government, status quo Republicans like Gingrich in 2012.

With a Gingrich implosion in the style of Perry or Cain, which could happen, Ron Paul could end up leading the pack in Iowa. Rep. Michele Bachmann won the Ames straw poll in August, but only by 152 votes over Paul. Bachmann is now polling at nine percent, fifth behind Perry who has 11 percent in the CBS/New York Times poll.

Ron Paul’s letter from his son, of course, isn’t the only volley against Gingrich. Paul is also running ads in Iowa like this:

Like Rand Paul’s letter, this ad shows some of the big problems with Gingrich that creates a conundrum for me and I suspect a lot more people. I really don’t like Romney, but I don’t think that Ron Paul will ultimately be able to beat Obama. I also have problems with Paul’s national security stance. No candidate is perfect, of course, but national security is a big one since it is one of the only things in the Constitution that the federal government is authorized to do and has historically done a good job on.

It will be really hard to get Ron Paul elected nationally. That’s just the truth. If you think that the national media was brutal to someone like George W. Bush–a so-called compassionate conservative–you ain’t seen nothing yet. Wait until a person like Ron Paul wins the Republican nomination and threatens their guy, Barack Obama. The media onslaught will be more than historic, it will unprecedented.

Some might say that this fear shouldn’t keep me from supporting Paul for president or accuse me of being a globalist of some sort. Understand, that I live in small-town Louisiana and don’t know any globalist. I did, however, see the Harlem Globe Trotters play as a kid when they made a rare trip here–even then, it was the B-team and not the guys that I had seen on TV.

I’m not a mindless media minion or being controlled by anyone–it is possible that I have thought long and hard about Paul–even read his books–and I’m just writing what I believe to be true. I know that’s a hard thing for some of you Paulites to get your mind around, but stay with me.

I voted for Ron Paul in the 2008 presidential election, because I was so turned off by John McCain. Louisiana was only one of two states that had Paul on the ballot.

Sometimes, as small government people, we fall into the trap of thinking that many more people think like we do than actually do. After all, limited government seems to make sense to us when we look at American history and understand the destruction that powerful, centralized governments have caused the world. Not everybody thinks like we do, however, and many only see things through the filter of the Main-Stream-Media. If that weren’t the case, Obama wouldn’t be in office now.

My greatest concern is that Obama will win re-election and remain in power working to implement his socialist policies unfettered by not having to run again for re-election. That’s a scary thought.

Gingrich is looking to be the best guy to knock Obama out of office and there is part of me that thinks that that he, as a historian, will understand what needs to be done to help return the country to prosperity. I also believe that Gingrich will know that he can’t upset the Republican-base if he wants to be successful as president.

That might be just wishful thinking, but it’s all I got to go with as things are shaping up in the 2012 presidential election.