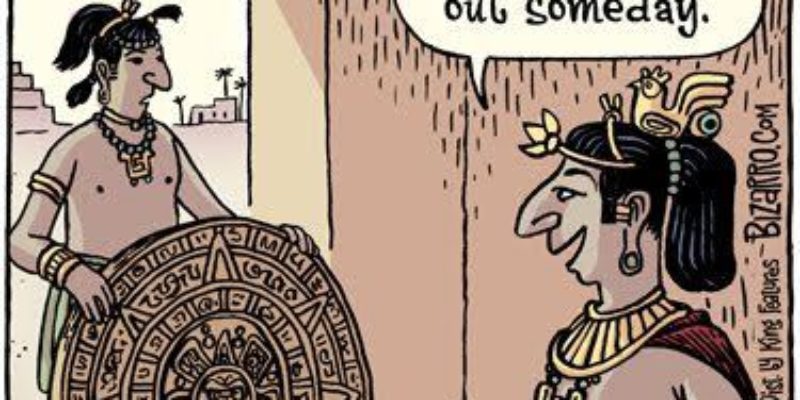 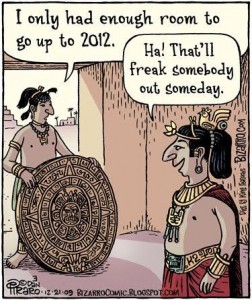 I’ve been paying so much attention to the presidential race set to take place next November, that it slipped my mind that none of it matters anyway.

Today marks the year-long countdown to Dec. 21, 2012 when the world will end, according to the Mayan calendar.

If Obama is re-elected I might be convinced that the end of the world is just around the corner, but I’m not so sure.

It seems like some folks are buying into the belief that primitive people whose favorite Sunday pastime was sacrificing 16 year-old girls to pagan gods somehow are clued into the End Times.

Apocalyptic predictions have come and gone time and time again throughout history and, interestingly enough, people are still around to make more of them.

Here is a count-down of my favorite top five doomsday predictions.

I would have made a top 10 list, but I can’t be wasting too much time on this since we really don’t have that much time left.

The Millerites were the follower of William Miller, a Baptist preacher from New York who was able to convince tens of thousand of people in the 19th Century that he knew when the Rapture was going to happen–in fact he had a new date for it every time he was wrong.

Miller said he was able to decipher hidden meanings from passages in the book of Daniel that told him that the end would come sometime between March 21, 1843 and March 21, 1844.

Jesus would come and gather his flock sometime within that year, Miller predicted, and the rest of the world would suffer a slow, agonizing death. Miller was great at parties, I’ll bet. 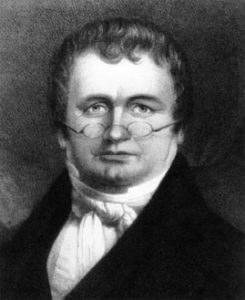 When March 21 passed and Jesus was a no-show, Miller and his followers weren’t deterred. Miller simply explained that he forgot to carry the “2” or something the first time and that the end of the world would now come on April 18, 1844.

He was wrong again–in case you didn’t know–and another prediction was made.

This led to what was called the Great Disappointment, when Miller and his followers, many of which had given away all they had to follow this nut, gathered on a hill waiting all night long for Jesus. Jesus, once again, was a little too busy to join the party.

It was then the Millerites began to realize that there would be no “Miller Time” and Miller’s followers began to peel off.

If he got to Heaven and asked Jesus where He had been, I’m sure the Savior told him that he shouldn’t have spent so much time looking for secret meanings in Daniel and should have read Matthew where is says, “”However, no one knows the day or hour when these things will happen, not even the angels in heaven or the Son himself. Only the Father knows.”

The Jehovah Witnesses have had a bevy of doomsday predictions in which followers have claimed they knew when Jesus would return following a great War of Armageddon with mass genocide that only the strong would survive–meaning them. 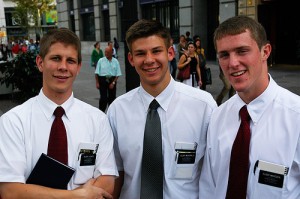 They first said the world would end in 1914 and when World War I came about they took this as proof-positive that they were right.

The world didn’t end in 1914, sorry to say, so they switched their Armageddon prophecy to the next year–1915.

Again no end of the world, but they kept going, making similar predictions for the years 1920 and then for 1925.

They needed some breathing room after that and predicted that Armageddon was coming in 1941. The United States entered World War II by the end of the year, but still no Armageddon.

They kept making doomsday predictions up until 1994, when the church decided that if they couldn’t accurately predict when the world would die they would annoy it to death by showing up at people’s houses with little booklets during dinner. 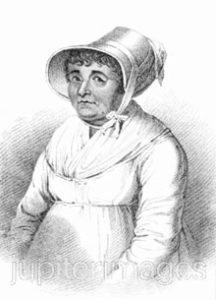 Joanna Southcott was a 60 year-old virgin that lived in 19th Century England.

She had been a Methodist until she became a mystic that believed she had magic powers and was able to convince lots of people that she would give birth to the Messiah on Oct. 19, 1844, which would herald the end of the world.

However, in the months leading up to doomsday she showed no signs of pregnancy and it became apparent that there would be no virgin birth.

She wasn’t able to find anyone to help her along with becoming pregnant either, since most men took one look at her and said, “Not if the world were ending tonight.”

Her followers refused to bury her in hopes that she would rise again from the dead and somehow become pregnant. Her prospects seemed to be getting worse and worse as she decomposed and her flock concluded that no man could get that drunk. They finally turned her body over to the authorities.

She left behind a sealed box filled with prophecies that she instructed to never be opened until 24 Anglican bishops could be gathered for that purpose.

It is rumored that Geraldo Rivera was busy gathering the bishops for a TV special until the whole Al Capone safe thing. It all kind of fell through after that. 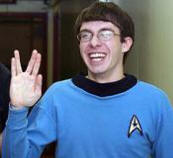 This is the Heaven’s Gate Cult mass-suicide in which Nerd Supreme Marshall Applewhite was able to talk around 40 geek disciples into the belief they would be beamed up into another dimension in March of 1997 by a spaceship that was following the Comet Hale-Bopp.

The cult thought that the comet would signify the end of the world, which would then be recycled by intergalactic tree-huggers.

They rented a 9,200 square-foot mansion in California–where else?–and ate poison apple sauce as the comet approached.

The group was found dead later dressed in matching black shirts, sweat pants and Nikki tennis shoes with plastic bags on their heads.

One can only hope that these are the virgins that the Islamic suicide bombers will find waiting for them when they get to the afterlife. 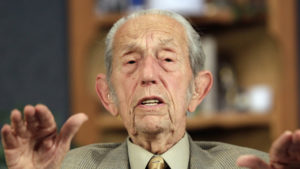 I had to put old Harold as my No. 1 doomsday wacko, because his end of the world predictions are still so vivid in memory and, well, because he is such a pathetic sad-sack.

I’m sure you remember news stories about Camping, the radio broadcaster– once again, from California–who predicted that the world would end earlier this year on March 21.

He said that Jesus would scoop he and his followers up to Heaven followed by five month of fire and brimstone for the rest of us to enjoy before the world finally when kaput.

His first predictions, which he says he found by decoding in the Bible, didn’t come true.

Like Miller, I guess, he didn’t carry the “2”. It’s funny how all these doomsday prophets are bad at math.

He re-figured and decided that Oct. 21 would be the Rapture. Once again, he and his followers were disappointed that the rest of us weren’t all left to burn.

After that, Camping had a stroke and went into retirement. Jesus could have at least called and let him know why he was stood up.

If you can’t count on End Times coming on schedule what can you count on? I know, you can always count on some other loser to pop up and tell you that the end is near.

Interested in more national news? We've got you covered! See More National News
Previous Article What We Need Is A Hanukkah Song Today
Next Article Because One Hanukkah Song Just Isn’t Enough