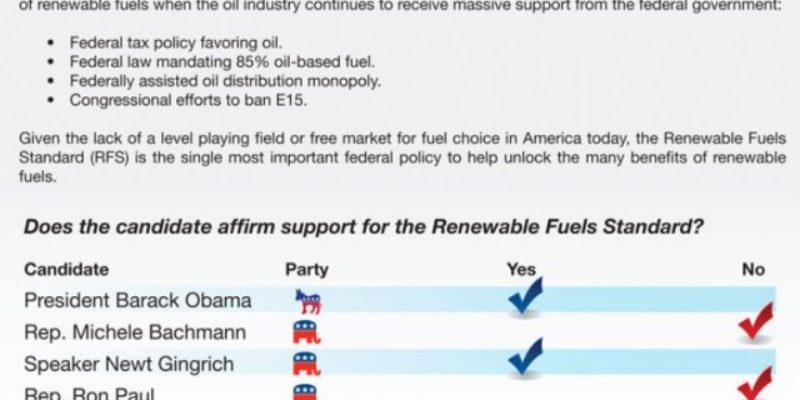 “Top two in Iowa support renewable fuels standard!” tweeted the jubilant Iowa Renewable Fuels Association. In other words, the ethanol lobby is thrilled that Mitt Romney and Rick Santorum both support forcing you to buy their ethanol. I suppose I’d be tweeting with exclamation points if the top two candidates in the Iowa caucuses wanted to force you to buy my books.

The IRFA scorecard from which today’s triumphalism comes is a classic example of classic rent-seeking advocacy. Four issues are scored – and the most disappointing finish in Iowa belongs to the candidate who rated zero for four… 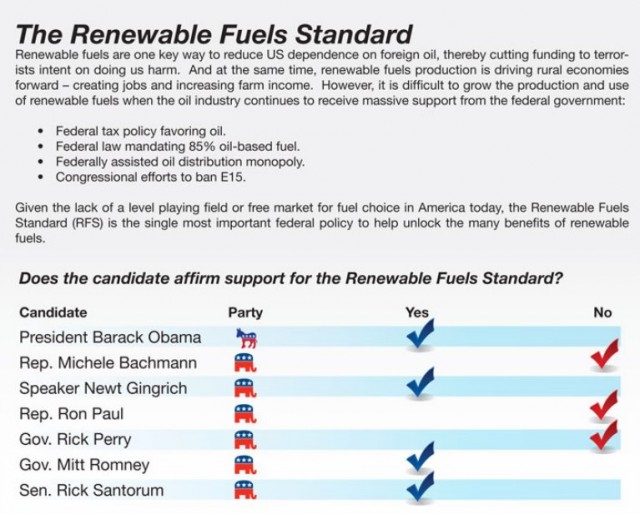 Rick Perry is on the opposing side of the ethanol lobby on all four issues. Mitt Romney and Rick Santorum stand with them on all four.

So does Barack Obama.

It’s quite apparent that one of the best ways to win the hearts of Iowans is to promise them free money from the federal till.

But it’s no longer an issue, right? Ethanol subsidies went by the wayside last year, so the giveaways are over – aren’t they?

Not so much. As Aaron Smith at The American explains, the Renewable Fuels Standard is the end-all and be-all of the ethanol giveaway and it’s not going anywhere…

Deficit hawks, environmentalists, and food processors are celebrating the expiration of the ethanol tax credit. This corporate handout gave $0.45 to ethanol producers for every gallon they produced and cost taxpayers $6 billion in 2011. So why did the powerful corn ethanol lobby let it expire without an apparent fight? The answer lies in legislation known as the Renewable Fuel Standard (RFS), which creates government-guaranteed demand that keeps corn prices high and generates massive farm profits. Removing the tax credit but keeping the RFS is like scraping a little frosting from the ethanol-boondoggle cake.

The RFS mandates that at least 37 percent of the 2011-12 corn crop be converted to ethanol and blended with the gasoline that powers our cars. The ethanol mandate is causing corn demand to outstrip supply by more and more each year, creating a vulnerable market in which even the slightest production disturbance will have devastating consequences for the world’s poor. It is time for the federal government to stop requiring cars to burn food.

Ethanol mandates were introduced in 2005, causing ethanol plants to sprout across the country. Firms could enter the ethanol industry secure in the knowledge that the government had guaranteed demand for their product. By the end of 2005, 4.3 billion gallons of ethanol-producing capacity existed and 1.8 billion gallons of capacity was under construction. One year later, capacity under construction had tripled and represented more production than existed at the time.

The ethanol construction boom gave the corn market fair warning of an impending increase in demand and enabled it to absorb the initial onslaught. Inventories accumulated and a record number of corn acres were planted in 2007. Nevertheless, production has been unable to keep up with demand. According to the most recent USDA estimates, carryover stocks into the 2012 crop year will be only 6.7 percent of annual use, a level seen only once since 1950. Ethanol policy is now affecting food prices more than ever.

The current price of corn on the Chicago Mercantile Exchange is about $6.50 per bushel—almost triple the pre-mandate level. What would the price be if ethanol production had been frozen at 2005 levels? In the 2005-06 crop year, 1.6 billion bushels of corn were used to produce ethanol; in the 2010-11 crop year, 5.0 billion bushels were. When corn is processed into ethanol, approximately one-third of its caloric value is retained in a byproduct known as distiller’s grains, which is fed to animals. Thus, an increase of 3.4 billion bushels of corn used for ethanol production implies a loss of 2.3 billion bushels to the food system, equivalent to about 16 percent of the total U.S. supply of corn.

If these 2.3 billion bushels were returned to the food system, users would increase consumption and farmers would reduce production until prices had declined enough to absorb the excess supply. In recent research, Michael Adjemian of the U.S. Department of Agriculture and I estimate that under current market conditions corn users would consume 2 percent more corn for every 10 percent reduction in price. Nathan Hendricks of Kansas State University estimates that U.S. farmers would plant 3 percent fewer acres to corn for every 10 percent reduction in price. Summing these effects implies that the market could absorb 5 percent more corn for every 10 percent price reduction. Thus, returning 16 percent of supply to the food system would reduce corn prices by about 32 percent.

And it’s not just your grocery bill feeling the pinch from this asinine policy. American foreign policy is made considerably more difficult and the world more unstable as a result…

If it ever wasn’t clear that Iowans are unfit to pick a president, this year there can be zero doubt.