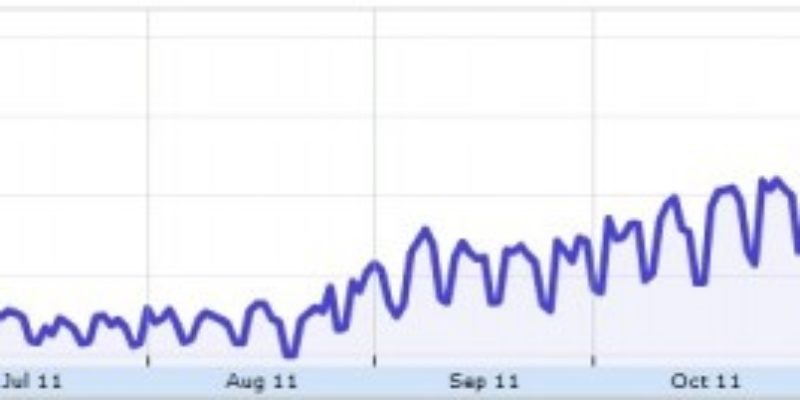 Here’s a graph for our folks to look at…

That’s a graph of advertising impressions on a daily basis here at The Hayride since we started using an ad server at the end of April last year. You’ll notice that since we switched our site over to the current dedicated server on which it sits (that changeover hit our traffic pretty hard, as folks had to update their bookmarks and it made for some having problems getting to the site for a couple of weeks), we’ve seen a huge surge in traffic.

But that’s not really new. We’ve been growing and growing since we got started with this thing in December 2009.

Last week, we did more than that in four out of the five weekdays.

That wasn’t actually the busiest week we’ve ever had here on the site. We had a major traffic spike back in April of this year when we ran that piece about the folks in Brandon, Mississippi and how they bamboozled the Westboro Baptist Church picketers, and that post represented the vast majority of the page views on the site. In fact, Thursday’s 30,772 figure actually represented just the 5th busiest day here – four other days had more, including the day at the height of the Westboro surge when we actually hit 62,000. You couldn’t even hardly get to the Hayride that day; the server was overloaded. Otherwise who knows how much traffic we might have gotten.

But this is different, because it’s not being driven by any article in particular. It’s just a steady base of traffic. We’ve got lots of stuff getting read, and the hits on the home page are far, far more than they were back then.

Meaning we’ve got a big readership, and it’s growing.

The folks who’ve been around here a while probably know about Compete.com by now. We use that site to compare ourselves to the others out there, and in particular the other media sites in Louisiana.

And today, Compete came out with their December traffic numbers. We were pretty happy to see those. 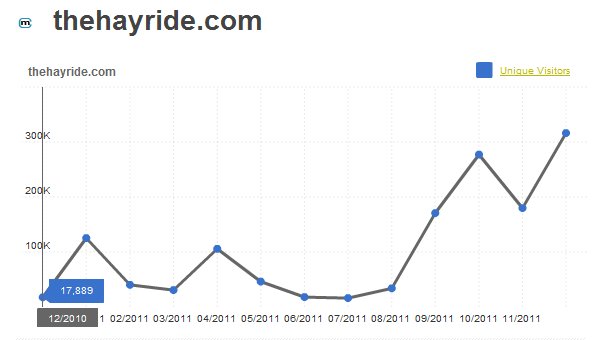 They’ve got us measured with 316,000 unique visitors for the month of December, which is up from 180,000 in November. Prior to the dropoff as a result of switching the site to the new server that month, we were at 277,000 unique visitors in October.

And at that point, back in October, we were the 2nd-biggest media site in the state behind the Times-Picayune.

Well, we’re the 2nd-biggest again. Our two major competitors for that title are the Baton Rouge Advocate and WWL-TV, both of whom beat us in November. In December, we climbed back over them.

We stick out like a sore thumb on this list, considering that the other six are all owned by big media companies and have things like marketing budgets and huge payrolls – and we’ve got diddly poo on that score.

Rather than suggesting that some of those competitors set about firing people, which we really don’t want to see happen, we’d maybe like to offer something else up to folks reading this.

Namely, how about advertising with us?

We’re in the process of hiring an ad sales rep at present, and we’re interviewing candidates now (if you have media sales experience inside Louisiana, shoot us a resume and we’ll take a look), and we’re going to hold off on re-doing our media kit and rate card until the new guy/gal is on board. But what that means is that right now we’re in a position to do some deals for 2012.

If you’re noticing that what you’re currently doing ad-wise is getting you less and less return on your investment, that’s probably because you’ve got your ad dollar in the wrong place. If you’re a Louisiana advertiser with a large web presence or you’re in multiple markets in the state, we might well be the right place. With us, you get the ability to deliver multiple creative messages within a campaign tailored to demographics, time of day or other specific factors. You get a cost-per-thousand-impressions so much lower than print or TV it’s not even funny. You get the ability to tie your brand to a medium which is growing like a weed. And you get the ability to tie yourself to Louisiana-oriented content which will reach an audience VERY local to Louisiana not just geographically but spiritually as well. Our site has a huge Louisiana expatriate readership, though the majority of our regular folks reside in the Bayou State.

And if you double your investment by advertising on the Nooner, the amount of accountability and the level of targeting you can achieve is better than just about anywhere else. That thing goes out to 25,000 people over three-quarters of which live in Louisiana.

We’re dirt-cheap, we’re flexible, we’re accountable, we’re huge and we’re growing. We’re a great ad medium. And we’re very happy to work with you as you look to grow your business in 2012.