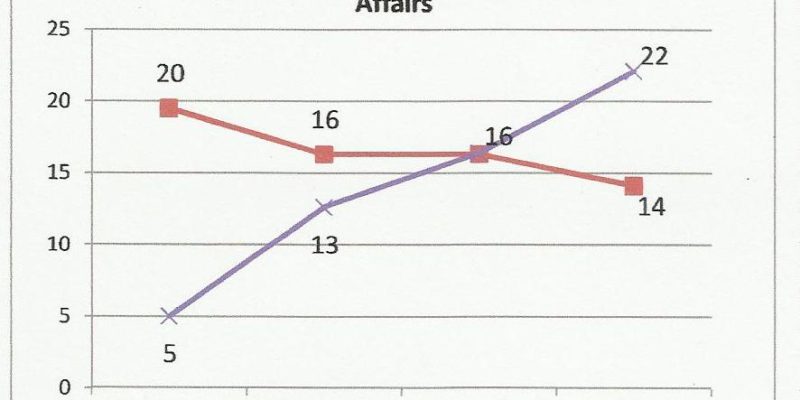 It’s exciting to be on the forefront of modern media coverage, as evidenced by results from the new 2012 Louisiana Survey, which shows for the first time Louisianians are getting their news more from websites like The Hayride than they are from newspapers.

A survey of 731 randomly selected respondents reveals that 22 percent use the Internet for Louisiana news on politics and public affairs, as opposed to 14 percent that rely on traditional print media: 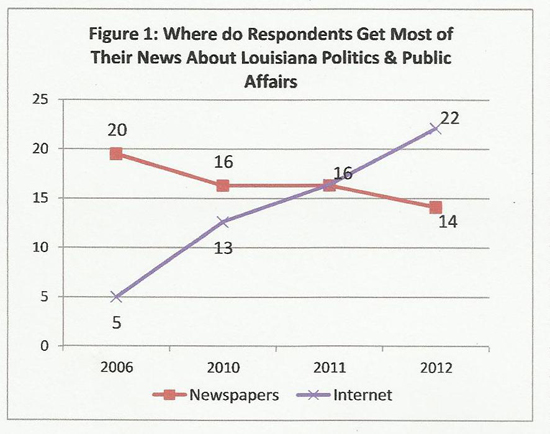 Notice the upswing over the last two years—about the time The Hayride debuted, incidentally—of about 10 percent.

Even television, still the most popular source for Louisiana residents, is feeling the heat of the Internet, with the number of people tuning in for news dipping from 61 percent to 56 percent over the last year.

There are a number of reasons that online news is outpacing print, not the least of which is big corporations like Gannett—which owns five major newspapers in the state—coming into Louisiana, buying publications and operating them widely detached from the communities they serve.

Let’s be honest, we are all this trying to make a buck but you have so many reporters out there these days so afraid about losing their jobs by upsetting their higher-ups that they don’t want to rock the boat.

Here in the blogosphere, writers answer more to our readers who generate the web traffic that pays the bills, instead of a boss who only sees the newsroom when he wipes the fog off of the window of his air-conditioned office.

At The Hayride, our readers have made us the second largest media site in the state in recent months behind the Times-Picayune.

The numbers of people utilizing the Internet for news over print media is even more dramatic when you break down the demographics in the 2012 Louisiana Survey study.

As many as 39 percent of people 25 to 30 years-old in Louisiana are using the Internet as their primary news source and 30 percent of 18 to 24 year-olds are doing the same. These people make up the key-demographic that advertisers play to and it’s a demographic that comprises the larger part of our site’s readership.

The Hayride is grateful to readers who use this site for breaking Louisiana news and political commentary—and other fun stuff that we put up to blow off a little steam now and again.

We are also thankful to our advertisers that keep up in business. More some information on becoming one of them, click here.

Interested in more news from Louisiana? We've got you covered! See More Louisiana News
Previous Article Ortego Gets A Chance To Apologize On Local TV For Dumb Statements On Veterans…
Next Article Why Is The New Orleans City Council Screwing Tulane Over?