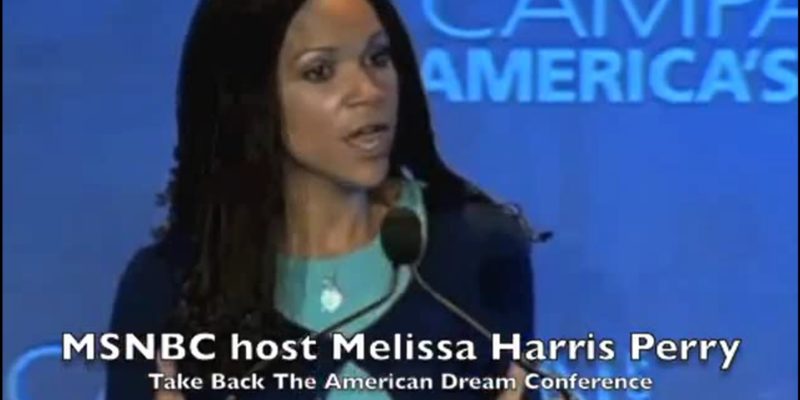 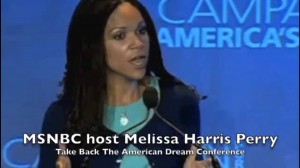 If you haven’t read Oscar’s take on the Melissa Harris-Perry Take Back The American Dream Conference speech or haven’t seen the video, go here before reading this.

Speaking Monday at an Occupy Wall Street—whatever happened to that movement, anyway?— inspired conference, the MSNBC host and Tulane prof said the 9-11 terrorists helped America out by giving us a new “racial enemy” to hate.

That was nice of them, I guess. White folks in the U.S. were hurtin’ leading up to the terrorists attacks—I know I was feeling the pain— since our hate of “Reagan’s welfare queens” had waned over time. After all, it had been a while since all those televised be-headings by welfare queens in the Reagan-era, but I say “never forget.”

We desperately needed new people of color to “imagine” as our enemy, so hats off to the Arabic terrorists who crashed airliners into the World Trade Center, the Pentagon and a Pennsylvania field killing around 3,000 Americans for providing us with an imagined enemy.

Finding a racist under every rock is nothing new for progressives like Harris-Perry. Conservatives pointing out that 47 percent of Americans don’t pay income tax, mentioning that Social Security is going broke or using the words “welfare” and “crime” is all coded racism, don’t ya know:

No, conservatives debating these issues isn’t racist nor does our nation identify itself through its “racial enemies,” but people like Harris-Perry see things that way because their identity is built entirely on finding racism every place it ain’t. By her way of thinking, if the country is attacked by Muslim extremists who happen to be Arabic and we respond, we do so because we are racists.

Remember all those pleas not to attack our peaceful Arabic neighbors in retaliation in the wake of 9-11?  Those warnings were insulting, because no one but extreme nut-jobs would ever do such a thing and most Americans aren’t nut-jobs. It was insinuated that knee-jerk, hate-filled Americans would let their innate racism bubble to the surface and commit acts of violence on innocent people. All those attacks against Muslims never happened—not because we were admonished not to do so, but because it’s not who we are.

Given that the United States is a nation comprised of people from all corners of the earth—every race and creed that can be imagined resides here—we all get along remarkably well.

Sure there is violence, but it’s typically confined with-in races. Black crime is mostly perpetrated against blacks, white crime against whites and so on. There is also inter-racial violence in this country, but black people are many times more likely to commit crimes against white people than vice-versa. Racism can be found as the reason for some of these crimes, but I suspect it’s more complicated than it might appear on the surface. The fact that many young black men disproportionately grow up in households without a father and with lower incomes than white males do has a lot to do with it. Blacks who commit violent crimes are also more likely to go to jail and spend more time there than whites who do so, as well. If you have more money, you are more likely to get off—think how long it took O.J. Simpson to wind up behind bars.

Racism is a human condition and there is no group of people who have a monopoly on hate. If we could wave a magic wand—not that anyone should want to—and give everyone the same skin pigmentation, we would find other things to separate ourselves. The blue eyed people would talk about how bad those hazel eyed people are—not to mention those brown-eye types.

Racism can only be defeated by tearing down institutional barriers—-from Jim Crow laws of the Old South to affirmative action laws of today—and by looking at people as individuals instead of defining others as members of groups. The American identity was built on notions of individualism and self-reliance, not on “our notions of whiteness and racial enemies that are non-whites,” despite what race-baiters like Harris-Perry say.

You will never be able to completely rid the world of racism, there will always be people who will find irrational reasons to hate other people. You can lessen its impact and effect on society, however, by calling people like Perry-Harris who are trying to couch everything as  “us” against “them” what they are—racists.

The terrorists that attacked us on 9-11 didn’t care about the color of the Americans they slaughtered. Red or yellow, black or white, we were infidels their sights and all needed to die. That’s true hatred—nothing imagined about it.