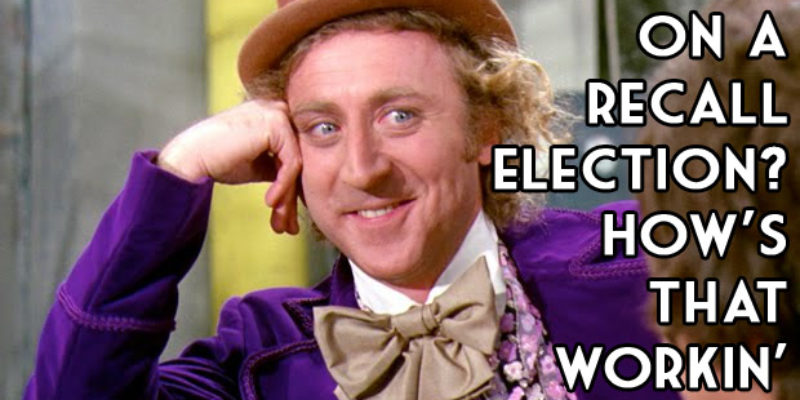 Oscar got us started last night, but entertaining as his contribution may have been, it’s not quite sufficient in my estimation.

After all, we’ve gone in the space of a year from this…

Naturally, we’ll require some theme music for the rest of the post. This seems fitting…

The idea that “Democracy Died” because a duly elected governor was re-elected after passing a bunch of reforms that voters supported is, of course, moronic.

But if “Democracy” is to be defined as a bunch of public sector union troglodytes throwing temper tantrums and engaging in a rejectionist squandering of their own money in a similar manner to that which they demand of public funds, then by all means let’s pray it did die last night.

Is this “Democracy?” Here’s poor Tom Barrett, who doesn’t seem like all that terrible a guy – he just lets his ambition overload his judgement on a chronic basis – getting a reaction from his fans after conceding last night…

Does “Democracy” involve busing voters in from Michigan to stuff ballot boxes in Wisconsin?

Does it involve publishing the voting records of private citizens in an effort to intimidate them?

What we saw in Wisconsin was certainly a rejection of the concept that public employee unions are entitled to a siphon into taxpayer wallets. But it was also an upholding of standards as well. Some 60 percent of the voters, in exit polls, said that recall elections are appropriate only in cases of official misconduct. Another nine percent said they weren’t appropriate, period. Only 27 percent said policy disagreements were enough to start a recall. 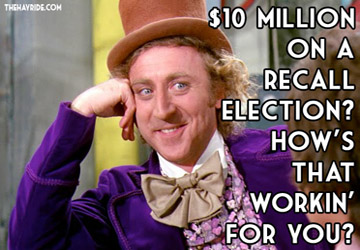 National implications? The new Democrat line is that Wisconsin didn’t contain any; which is predictable. And maybe they’re right, though we can certainly remind Debbie Wasserman Schultz, also known as The Joker, of the fact she called it a “dry run” for the campaign in November.

Oops. More like a dry hump than a dry run given the results, no?

Wisconsin has certainly become a battleground state, and that’s news enough on a national scale given that no Republican has won it in a presidential election since 1984. As goes Wisconsin, to a large extent we can surmise Michigan, Ohio and Iowa might also go – and if the Democrats can’t hold those states they can’t hold the White House.

That’s the national implication which matters. It’s not necessary to see this as a rejection of Obama. There are exit polls from last night which show Obama with a 51-45 lead over Mitt Romney, which is a decent lead but not one which should make the cabal in Chicago comfortable. The fact that the president and his union constituency have clearly lost ground over the past three years in a key state is news enough.

But the societal implication, as Oscar noted last night, is tremendously important. Scott Walker has proven that it’s not political suicide to break the public employee unions. He won’t be the last governor to stick a pin in their balloon now that he’s survived this recall.

And when the public sector unions lose half – or more – of their membership when they don’t have collective bargaining with politicians (even FDR knew collective bargaining between unionized government employees and politicians they would elect was insanity) or automatic payroll deductions for dues, they cease to become an important political force. What you saw last night in Wisconsin was the end of those unions’ ability to drive an election. That in a state in which public employee unions are more powerful than almost any other; in fact, the idiocy of public sector collective bargaining actually began in Wisconsin.

You’ll see that tide rapidly receding. What you might also see is a healthy spate of bloodletting among union leadership as well, in which the Richard Trumkas and Andy Sterns (Stern is already gone) start getting toppled from their posts and being replaced by people who are less partisan and less socialist.

And that’s a good thing. The people of Wisconsin ought to be commended for making an important, and highly productive, choice.

I would like to offer these words of comfort. When you progressive/liberal/Democratic activists look back on your quest to begin the Wisconsin recall movement, I want you to appreciate the amazing amount of work that you spent on it. You called. You networked. You wrote letters and blog posts. You contributed to opposition groups. You reached out, and found people just like you, and you banded together to fight. You marched, and you stormed the state capital, and you were arrested.  And you kept going, and calling, and struggling, and you put your time, your money, and every atom of your being on the line. For some of you, this was your finest moment. You fought for this. You fought so hard for this.

Oddly enough, I didn’t do any of that, but I won anyway. That’s because you suck, and I don’t.

Well, I didn’t say that they were words of comfort for you.

UPDATE #2: Wait, stop. There are national implications to this race after all. Who knew? Interested in more national news? We've got you covered! See More National News
Previous Article One Gimmick Bill That Deserves To Pass
Next Article Obama To The American People: Vote Me Out If You Want Economic Growth