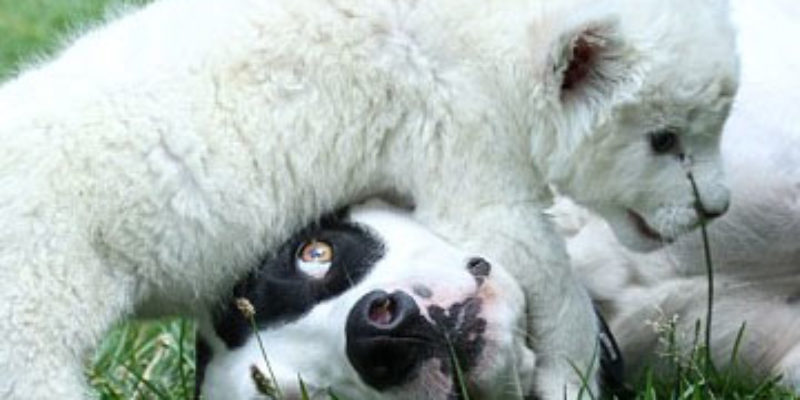 I’m still steamed about the Rat Bastards show that’s gonna debut tonight, so you’ll excuse me if my attitude about this is more cynical than y’all might like.

I mean – really? A Swamp People show about bearded retards who kill nutria?

Anyway, this is about something a little more upbeat.

And LeJon just took JoJo in as his lil’ brudder.

A mongrel dog has become stepfather to a rare white lion born in captivity in Germany that was rejected shortly after birth by his mother.

Pointer mix Lejon, two, and three-week-old lion cub Jojo are inseparable since meeting at the Safari Park in Stukenbrock in north-west Germany.

JoJo was initially separated from his mother because of a belly button infection but when carers tried to reunite the pair, she shunned him.

So in other words, Jojo’s mom’s a bitch who’s more interested in free stuff from the government of the safari park than raisin’ her kid. And Lejon’s the nice dude from the neighborhood who’s tryin’ to get to heaven by takin’ care of the lil’ brat.

And this is what he gets for his trouble…

Park worker Jeanette Wurms.: ‘After days of treatment we were not sure wether the mother would accept her baby.

‘So for safety reasons we are handraising and bottle feeding. I am glad that Jojo has found something like a step father and step brother in my playful and loving pointer-mongrel Lejon.’

She added: ‘Now he gets fed by hand by me and gets the paternal affection he needs from Lejon.

‘The dog is very patient. Jojo scrambles all over him, jumps on his head, bites his fur. But he doesn’t mind – he’s a very patient surrogate.’

This is all real cute and so on, except that when that lion gets to be like 3-4 years old the dog won’t be such a cool guy to hang with.

Instead he’ll be more like a Boston Butt. Or a bone-in ribeye.

Kinda like the coonasses with their assault rifles and dynamite down in the marsh messin’ with peaceful local critters for a little bit ‘o money.

Lejon doesn’t know what he’s in for, man. I’m tellin’ ya.