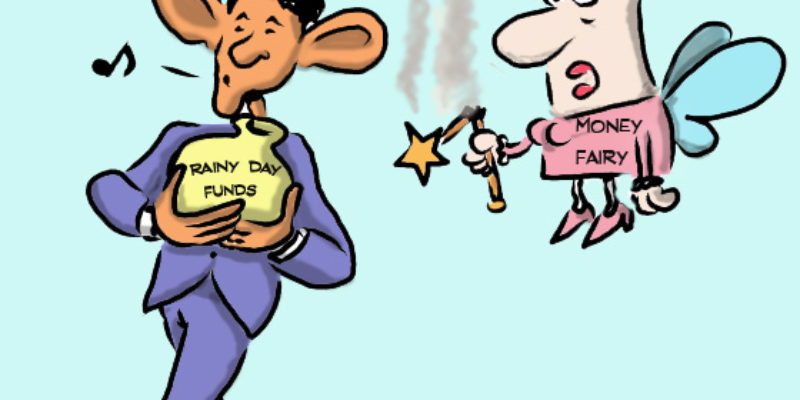 During the fracas in the Louisiana Legislature leading up to the passage of Gov. Bobby Jindal’s education reform package, I spent time at the state Capitol capturing video and taking photographs of people on both sides of the issue for The Hayride. Toward the end of the work day, they would be put into blog posts from a certain point of view—namely, my opinion that Jindal’s reform package was a worthy endeavor and ought to be passed.

It was a lot of fun, and I always made it a point to identify myself as being from The Hayride to anyone I interviewed, regardless of where they stood on education reform. I was honest and our blog’s position on the legislation was well documented. Since I have worked for The Hayride, I have occasionally been amused by criticism from some of the left that we are biased.

My only response to this allegation is “Duh.”

We are a conservative website and make no bones about it. If anyone is in doubt, they can click The Hayride’s “About” tab, where we describe ourselves as “Louisiana’s premier conservative political commentary site.” No deception there, that’s exactly who we are.

That we are proudly biased is something that escapes some people from time to time, including Lamar White of Cenlamar.com. He blasted a piece I did on The Louisiana Budget Project on his blog some time ago as “irresponsible, unprofessional, and sloppy reporting.” I’ve known Lamar for years and expected better of him than to try and blur the lines between hard news reporting and opining, as well as the nasty tone of that post. Though I disagree with him on a whole lot, we’ve always had an amiable relationship.

I would expect that to remain the same should I bump into him, despite the rowdy ruckus between he and my friend MacAoidh—proprietor of The Hayride. In the Louisiana Budget Project piece in question, I took the facts as I found them and gave my opinion. That’s what we do here. There was no sloppy reporting involved. I called Lamar out on it and he later apologized for some of the things said on his blog.

If we make a factual mistake and catch it, we will retract. There were no factual errors in the piece.

Furthermore, we are not beholden to a political party nor any politician, rather guided by ideology. My viewpoint can best be described as libertarian/conservative. I have never been told what my opinion should be by MacAoidh. Since we are largely in-line ideologically we tend to agree, though we have disagreed on a few occasions.

On occasion, I also disagree with those in the Republican leadership in Louisiana, including Jindal. That’s the reason I was somewhat taken aback from a member of a teacher’s union who declined an interview with me during the reform debate because working for The Hayride made me “Jindal’s boy,” as she put it.

I have always had a good relationship with Jindal, as well—the same with Blanco—but I never knew I was “his boy.”

If I had been aware of this, I might not have drawn his ears so big in editorial cartoons like this that picked on him for using one-time money to plug Louisiana’s budget hole: 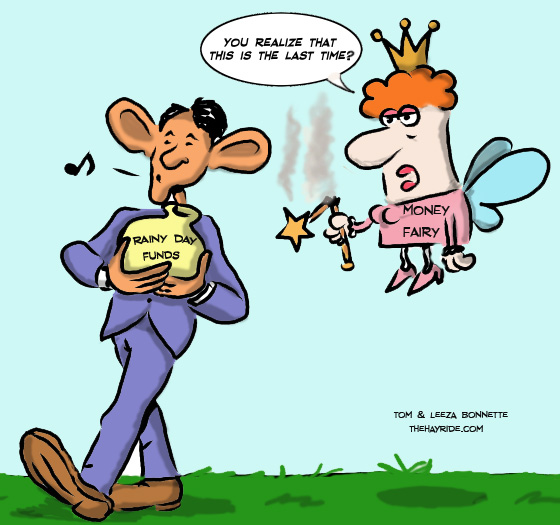 Cartoons are something I also do around here and Jindal’s ears are ripe for the medium, as are President Obama’s ears. Granted, Obama’s ears generally turn out larger than the governor’s, but I like Jindal more.

Jindal’s ears have been depicted in various sized—ranging from slightly protruding to elephantesque—at The Hayride and other publications in cartoons criticizing him for other things like supporting John Alario for Louisiana Senate president and high-paying “good ole boy” hires in his administration. I’ve also taken him to task in columns from time to time, although doing so isn’t nearly as much fun as drawing him in cartoons.

If The Hayride was taking orders from Jindal, you wouldn’t find posts like this one by MacAoidh explaining why Mitt Romney could do a whole lot better by passing him up as veep.  We have come out against the governor on several occasions—his kowtowing to trial lawyers in the Legacy Lawsuit debate has also earned him a trip or two to The Hayride woodshed. There are disagreements, but we are simpatico in giving Louisiana’s kids a way out of failing public schools. Although those who opposed education reform accused those of us in favor of it as being a bunch of Jindal cronies, it’s not true.

Whether or not they are cronies of Louisiana teacher’s unions is another matter. That brings us to this cartoon, which garnered a lot of attention during the education reform debate a few months back: 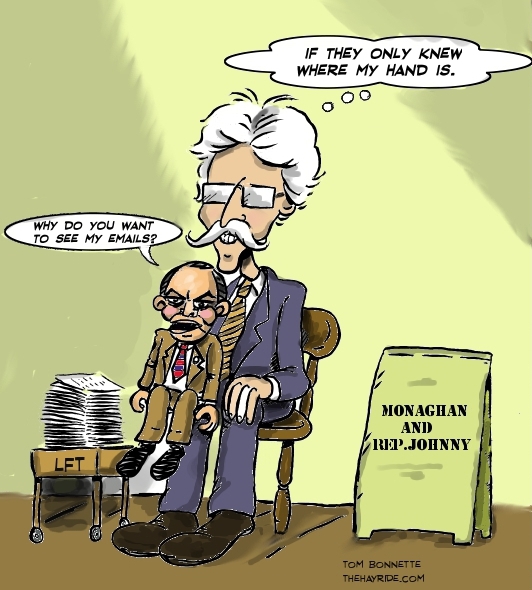 This Hayride cartoon, interesting enough, was a favorite with Louisiana Federation of Teachers (LFT) employees. After it went out, I discovered that some of them were distributing copies around the office. Monaghan even confronted me about the cartoon. He wasn’t happy about it, but at least appreciated the way I kind of made him look like Mark Twain.

The ventriloquist’s dummy on Steve Monaghan’s lap is, of course, Rep. John Bel Edwards. While the cartoon was my idea, MacAoidh came up with the part about the placement of Monaghan’s hand. I have to give credit where credit is due.

The cartoon was published in response to Edwards taking to the Louisiana House Floor to raise hell about a public-records request from attorney Bryan Jeansonne for correspondence between he and Monaghan. Since Edwards and other legs were parroting every talking point that LFT and the Louisiana Association of Educators were putting out, Jeansonne—a conservative activist and law partner of Louisiana Republican Party executive director Jason Dore’—thought the emails might give insight to who was really directing the oppositions’ argument at the Capitol.

That’s something that we would also like to know at The Hayride, which is why we have our own  FOIA request out there.

In other words, how true is the cartoon?

Our request went out to both Butch Speer, the Clerk of the House of Representatives, and Glenn Koepp, the Secretary of the Senate. Here is what we are asking for…

We requested correspondence involving Edwards, Sen. Pat Smith, Sen. Karen Carter Peterson and Sen. Ben Nevers. It is now over the 90 days given under Louisiana Public Records Law—confirmation of receipt came March 30—to produce the documents.

We are still waiting.

Our lawyer recently shot off a letter extending the date to July 25. It’s kind of hard to understand how it could be so difficult to gather emails from a Microsoft Outlook-based system and send them on, but we have given them until Christmas in July to deliver.

The New Star didn’t seem to have much trouble getting their hands on email exchanges between Education Superintendent John White, Jindal spokesman Kyle Plotkin and policy adviser Stafford Palmieri. So, what’s the hold up?

I’ll add this carrot to bring the donkeys along: If y’all go ahead a release all the emails—you know, follow the law—and they show that the legs in questions weren’t getting marching orders from teacher’s unions, The Hayride will publish a conciliatory cartoon. We’ll be glad to run a cartoon of Monaghan rubbing egg in the cartoonist’s face.

Yeah, I don’t think I’m gonna have to draw that one.