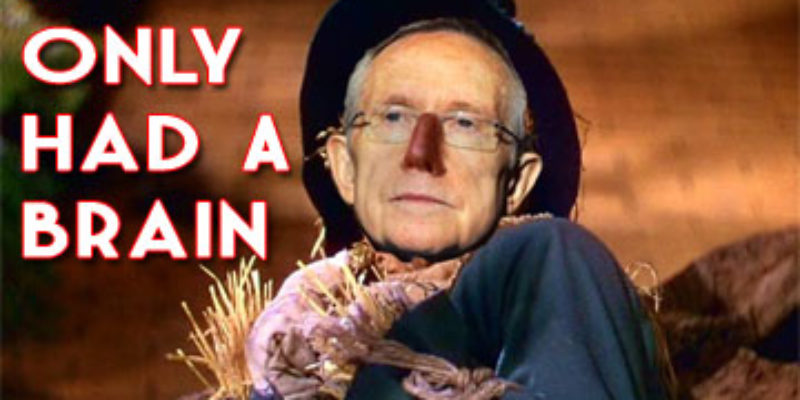 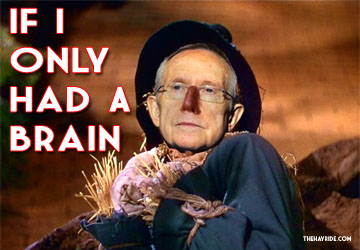 Oscar did his tapdance on Dingy Harry late last night, but he didn’t have access to the latest…

As I said before, I was told by an extremely credible source that Romney has not paid taxes for ten years. People who make as much money as Mitt Romney have many tricks at their disposal to avoid paying taxes. We already know that Romney has exploited many of these loopholes, stashing his money in secret, overseas accounts in places like Switzerland and the Cayman Islands.

Last weekend, Governor Romney promised that he would check his tax returns and let the American people know whether he ever paid a rate lower than 13.9 percent. One day later, his campaign raced to say he had no intention of putting out any further information.

When it comes to answering the legitimate questions the American people have about whether he avoided paying his fair share in taxes or why he opened a Swiss bank account, Romney has shut up. But as a presidential candidate, it’s his obligation to put up, and release several years’ worth of tax returns just like nominees of both parties have done for decades.

It’s clear Romney is hiding something, and the American people deserve to know what it is. Whatever Romney’s hiding probably speaks volumes about how he would approach issues that directly impact middle-class families, like tax reform and the economy. When you are running for president, you should be an open book.

This is, as Ed Morrissey notes, beyond counterproductive…

Reid, who also refuses to release his own tax returns, isn’t just a hypocrite and a slanderer.  He’s also a political idiot.  Until these attacks, Romney was on the defensive over his tax returns.  Now Romney can paint his decision to keep them private as a principled stand against unscrupulous opponents.  Reid has handed the high ground to Romney in this fight with his scurrilous lies.  Reid has all but ruined Obama’s strategy of making Romney look secretive and weird.

Exactly. Romney’s strategy from here on out ought to be “forget it. I’m not releasing any more tax returns, because no American should be bullied by Harry Reid to do anything. And oh, by the way, now that the Boston Globe has my high school report card – isn’t it time we get a look at Obama’s college records so we can find out whether he claimed he was an international student?”

Over at Michelle Malkin’s Twitchy.com, they’re trying to figure out who Harry Reid’s “credible source” is.

Back on Monday, CNN Money’s Dan Primack (of Fortune Magazine) weighed and measured all this and found it wanting…

One of two things has happened: (1) Reid is simply making the whole thing up, in order to pressure Romney into releasing tax returns for years prior to 2010, or (2) Reid’s investor pal lied, and the Senator didn’t bother to conduct even a mild vetting before sharing the accusation with reporters. Either way, shame on gossipy gentleman from Nevada.

Let me make this crystal clear: Investors in private equity funds do not receive, nor are they entitled to request, personal tax returns for fund managers. Not just at Bain Capital, but everywhere. For example, ask the person managing your 401(k) for their personal tax returns. See how far you get.

What makes this particular claim even sillier, of course, is that Romney hasn’t even been managing Bain funds for the past 10 years (no matter when you believe he left the firm). He’s been a silent investor like Harvard and MIT. Think the guy managing private equity for Harvard can get the personal tax returns of the guy managing private equity for MIT? Yes, that’s another rhetorical question.

And just to close the circle, it also isn’t possible that Reid’s source was someone within Bain because partner tax returns are not prepared or reviewed in the firm’s offices. Instead, that’s done at PricewaterhouseCoopers. So no “maybe someone found it on a fax machine” theories. It’s also possible that someone else at Bain didn’t pay taxes for 10 years, but that wouldn’t necessarily mean that Romney did or didn’t (he does have other financial interests).

A Reid spokesman defended his boss to me on the phone, only saying that I’d have to talk to Reid’s original source. But of course he wouldn’t provide the source, or even ask Reid if there had been a follow-up like “How the hell would you know that?”

But the amazing thing is that Reid, who’s the most consequential Democrat in the country outside of Barack Obama, would be the guy pushing this insanity. This is something Debbie Wasserman Schultz should be running out there, or perhaps Chuck Schumer. Or even Rahm Emanuel – somebody who doesn’t necessarily represent Democrats in national governance but whose role could be strictly political.

Reid? Reid runs the Senate. It’s been well over 1,000 days since the Senate passed a budget. The Senate gets absolutely nothing done, and hasn’t since 2010. That Harry Reid would take time out from being an ineffective leader to make ineffective, baseless and irresponsibly wild charges about a presidential candidate he has zero credibility to make those charges about – if Reid was from Massachusetts or Romney was from Nevada there might be some reason why people would think Harry Reid could have the goods on Romney, but that’s not the case – all this just paints Reid as a worthless hack unworthy of his position in government. Oh – and now we can start to explore the question of whether Reid might be a racist, because politics ain’t bean bag, right?

And it creates a credible narrative for the GOP that “Hey, by the way – you guys know we need to get rid of Obama if we want to save the country, but that’s not enough, because we have to get rid of this creepy old man who runs the Senate and that means we need to flip at least four seats there so Reid won’t be majority leader anymore.”

The whole thing is stupid. On every level.

It’s been said – the Romney campaign is saying it – that all of this is the White House’s doing. If so, it’s just more proof that Obama’s people are the worst bunch of political hacks ever to win a White House. David Axelrod and the rest of the gang have been painted as geniuses, but we already know they’re not. If they’re the braintrust who decided to send the Senate Majority Leader whose position is in relatively grave danger of getting blown up in November to fall on the sword – knowing that Reid is neither a particularly compelling advocate nor someone the American people have any particular respect for – they’ve got even less command of political strategy than we thought.

The guess here is that Reid is doing this on his own because somebody told him they have dirt on Romney – and now that he’s done it the Obamites have figured “in for a penny, in for a pound.” It might not even be a surprise if Reid got duped by somebody in Romney’s camp into charging this machine-gun nest.

Because you don’t run out there with an accusation that a multimillionaire cheats on his taxes for 10 years based on zero proof. Not if you’re the guy who runs the Senate. You can make scurrillous, stupid charges like that if you’re some bonehead staffer at the DNC, but even then you likely get your employer sued into the earth’s mantle.

What it points to is a gang of clowns, with Reid as the biggest one. The good news is that political stupidity on this scale is virtually never rewarded over the long haul. The bad news is this is who’s running the country.