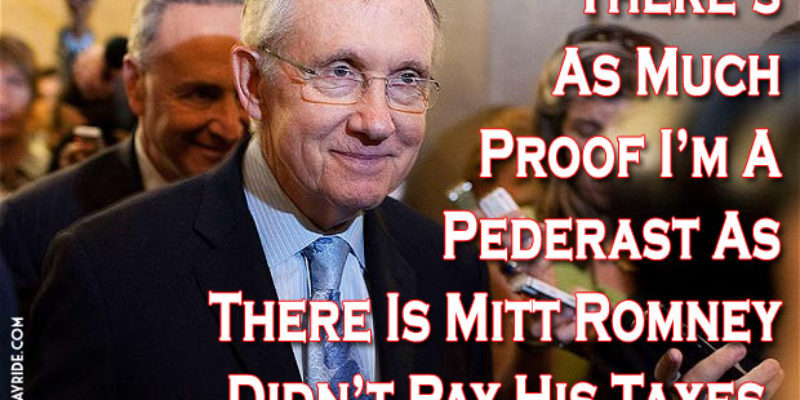 You can call this karma if you want. I’m good with that.

MacAoidh yesterday did a whole post about how it’d be better if our public discourse wasn’t so full of assholes. He’s got a point, but here’s the thing – if you go by that “don’t sink to their level” thing, you get beat. Meaning that you can regret having to be an asshole, but if you want to beat the asshole you pretty much have to out-asshole the asshole.

So long as you’re creative about it, that is.

You guys probably know the backstory to this. Reid came out earlier this week with one of the most fatuous, profanely dishonest pieces of poliltical assholery you’ll ever see – he said he’d talked to some cat who worked at Bain Capital who’d told him that the reason Mitt Romney won’t put his tax returns out was that Romney didn’t pay any taxes for 10 years.

Reid has said he learned about Romney’s taxes earlier this summer from an investor in Bain Capital who, he said, called his office to pass along the information. The senator has refused to identify the investor and has acknowledged that he can’t be certain about the veracity of the charges he’s been spreading.

In a conference call with Nevada reporters on Wednesday, he broadened what he said were his sources for the contention that Romney was able to avoid federal taxes.

“I have had a number of people tell me that,” said Reid, according to the Las Vegas Review-Journal, while refusing to elaborate. “I don’t think the burden should be on me,” Reid told the home-state reporters. “The burden should be on him. He’s the one I’ve alleged has not paid any taxes. Why didn’t he release his tax returns?”

On Thursday morning, Reid said that a nominee for a Cabinet position couldn’t get confirmed by the Senate if he made as limited a release of tax information as Romney has thus far.

“Let him prove that he has paid taxes, because he hasn’t,” Reid declared, then adding that “Mitt Romney makes more money in a single day than the average middle-class family makes in two years or more.”

OK, you got that? Reid cooks up this allegation out of nowhere that Romney didn’t pay his taxes, and then when somebody asks him to substantiate it he says he doesn’t have to. Like, Romney gets a bullshit allegation thrown at him and now it’s on Romney to prove his innocence.

Harry Reid is supposed to be a lawyer. Except he was sick the day they taught law where he went to law school. Not that he would have been smart enough to learn a damn thing anyway.

Don’t forget that this turd’s political career was born in a whorehouse. Politicians who come out of whorehouses are beyond reproach, ya see.

Besides, CNN’s Dana Bash says she talked to somebody who knows Reid’s source and said he’s “credible.”

I did speak to one source who is very close to Senator Reid who claims to also know who the Bain investor is that Reid spoke with, and insists that it is a credible person and this person if we knew the name we would understand they would have the authority and the ability to know about Romney’s tax returns.

Have you stopped laughin’ yet? They tell me Dana Bash got an attendance badge from the Brian Ross School Of Journalism.

And then Reid doubled down on it – he took to the Senate floor and repeated this crap.

So anyway, what we have is basically this on the Senate floor from the guy who’s in charge of the place…

But that’s not really the main event. The main event is that a few people in the blogosphere took Reid’s statements and the standards he’s settin’ by makin’ them and figurin’ that what’s good for the goose is good for the gander. This took on all kinds of forms.

I hear Harry Reid spent 10 years as Jerry Sandusky’s fluffer. Only telling you what I hear. huffingtonpost.com/2012/07/31/har…

That was on Monday. From there it really got going once Iowahawk goosed it a little…

#IHeardHarryReid is a child molester from at least 20 independent sources. It time for him to prove otherwise. — David Burge (@iowahawkblog) July 31, 2012

From there it picked up some steam. Ace Of Spades started playing with it at his site…

Yesterday, in honor of the news that Harry Reid Is a Pederast, I changed my twitter handle to Harry’s Filthy Secret, and invited people to guess my secret:

Come, sit by me, and unburden yourself of inhibitions. Sit with me on the Couch of Surprises.

Would you care for a refreshment? 5 Alive? Sunny D? I shall instruct my manservant Crichton to fetch you a Juicy Juice.

Crichton is mute and tells no secrets. He does for me admirably. Ah– the Juicy Juice, c’est arrive. How it shines golden in the light.

ah, dear boy, you there. If I may be so bold to say — you seem a strapping lad

Ah, the good Crichton has returned with our amuse bouche. Pray, try one. It’s a confit of Twinkee and muscle relaxant.

I play many games, Dear Boy. Chess? Ah, an amusing enough pastime. But now I play the most dangerous game of all — TickleFingers.

There are only two rules to TickleFingers. If you refrain from laughing, you win, and may draw from the Pocket Full of Mystery.

But if you laugh, you lose, and must sit upon the Lap of Growing Danger.

You have done well, boy. Come, let us visit the Medicine Cabinet of Adventure.

Things grew kinda like the danger in Harry’s lap. Pretty soon Instapundit was able to make this screencap… So an unnamed source has told another that #HarryReidisaPederast. Reid is silent. Where’s the front page story @huffingtonpost?

I’m troubled by the fact that #HarryReidisaPederast. And by “fact,” I mean that it is one until he proves otherwise. Maybe he just can’t?

They got lots of ’em. They’re pretty damn funny, I sez.

And then there’s this – the Drudge front mockup…

“Basement ‘looked like Caligula opened an orphanage'” is solid stuff. Love the creativity on that one.

And then there was our small contribution to this… 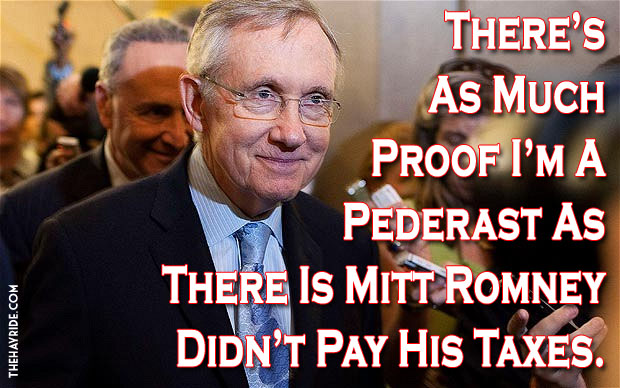 It’s pretty mean to accuse him of that. Sure. But Bob Beckel – everybody should listen to Bob Beckel – says politics ain’t bean bag. And if Reid can run his yap about Romney’s taxes, we can Sandusky him.

I mean, look at the guy. Would it really be so surprising?


Interested in more national news? We've got you covered! See More National News
Previous Article Before And After?
Next Article Haymaker Club News