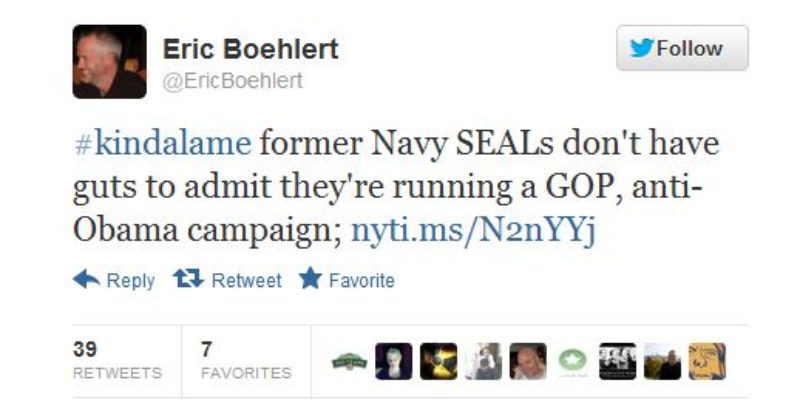 Today there’s a not-insignificant stir being created as the Obama campaign and its allies are howling about what they see as a “swiftboating” of the president on the issue of the national security leaks emanating from the White House over the past year following Navy SEAL Team 6 taking out Osama bin Laden in Pakistan.

The fracas is over the Special Operations OPSEC Education Fund— a nonprofit comprised of former special operations team members—releasing a short online documentary on Wednesday called “Dishonorable Discharge” that tells the president to shut his trap.

The Obama Administration is really good at holding back information on things like the federal government running guns to Mexican drug cartels and doctored reports that led to a costly drilling moratorium in the Gulf of Mexico, but loves to blab secrets about military operations that puts special ops personnel, their families and the rest of us in danger.

If a successful special ops missions like the killing of bin Laden would have happened under the watch of any other president in American history, you can bet that it would take years to learn the team that made the hit—if word ever got out.

With Obama, however, we have a president exchanging secrets for political capital to the dismay of American heroes who know that spilling the beans on the inner workings of our nation’s special operations units puts future missions, as well as lives, in great peril:

The Obama campaign can’t really attack OPSEC’s argument. Leaks from the White House have been so egregious that it’s even prompted progressive politicos like Diane Feinstein, who chairs the Senate Intelligence Committee, to speak out against the big mouths in the Obama administration.

Since Obama can’t assail the facts, his people are comparing the documentary to the controversial 2004 ad campaign from Swift Boat Veterans for Truth in which soldiers who were in Vietnam with former Democratic presidential candidate Sen. John Kerry said his combat medals were given erroneously.

OPSEC is countering by pointing out obvious differences. Foremost, is that their campaign isn’t about the particulars of Obama’s military service—he has never served. OPSEC spokesman Chad Coulton said that it’s about speaking out against an environment in which military secrets are getting out at unprecedented levels.

“Swift Boat at its core was a personal disagreement between John Kerry and men with whom he had served in Vietnam. This campaign doesn’t have to do with criticizing the president’s military service or anyone else’s,” Coulton told U.S. News and World Report.

The most outrageous attack on OPSEC thus far has been from Eric Boehlert, a scurrilous scribe from the Soros funded Media Matters For America who put this up on Twitter yesterday: 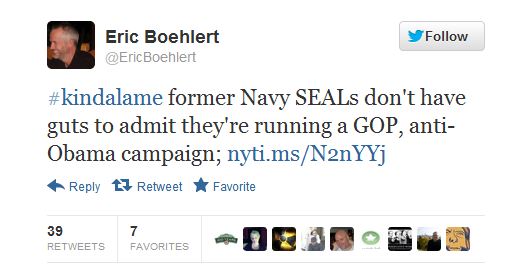 That an insect like Boehlert is brazen enough to call people who have stood in the ranks of the world’s most rugged warriors gutless is laughable.

Maybe he needs to be reminded who the SEALs are and what it takes to become one:

SEAL training includes something called “Hell Week,” which really weeds out the pretenders from the men who truly belong in the most elite fighting group in history.

There SEALs are sleep deprived, exposed to extreme heat and cold, nearly drowned and pushed to physical exhaustion to see just who is qualified to be sent into the most hostile areas of the world to carry out missions that American needs done, but only a handful of Americans actually can do. 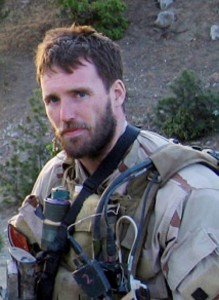 This is a picture of Lt. Michael Murhy, a member of the most decorated SEAL team in history. Murphy was killed in June of 2005 while sacrificing himself to save his fellow SEALS who were pent up in a fierce fire-fight on a mountain range between Afghanistan and Pakistan.

While leading a four man SEAL element on a recon mission to kill or capture a top Taliban leader, Ahmad Shah, Murphy exposed himself to enemy fire to be able to call for re-enforcement. With his body riddled with bullets, he made the call and continued to fight in the two hour battle that claimed his life and two other SEALs in his group. Marcus Luttrell, the only man to make it out alive, chronicles the heroic story in his book, “Lone Survivor: The Eyewitness Account of Operation Redwing and the Lost Heroes of SEAL Team 10”.

All and all, 19 Americans died in the engagement, Operation Red Wing, including 16 SEALS in a helicopter on the way to help that was shot down by the Taliban. There were 35 Taliban killed in the battle.

Lattrell was awarded the Navy Cross and the two SEALs killed in the mountain fight—Matthew Axelson and Danny Dietz—were given the medal posthumously. Murphy, a man with lots of guts, got the Navy Cross too, along with the Medal of Honor. 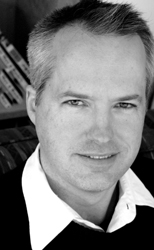 It kind of goes without saying that if he wants to keep calling SEALs “gutless,” he better keep hiding out on Twitter. If he decides to do so face-to-face in a bar some night, it might not turn out too well for him.