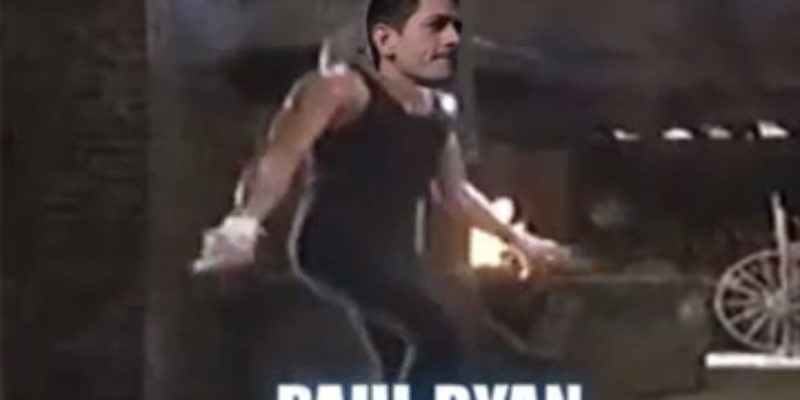 Well, yeah. Why not?

Maybe those steroids went to his brain. I dunno.

Ryan makes a pretty good Rocky, though. And this thing’s great – except I don’t remember Joe BiteMe beating up on Palin at all. I remember her kicking his wrinkled old ass pretty good. I also remember him braggin’ about the time us and the French kicked Hezbo-la out of the Lebanon.

Maybe he was talkin’ about back in the Crusades. Otherwise, I got nothin’. Biden din’t win diddly poo. Anyhoo, this picks Ryan to whup him…

But am I the only one out there who’s startin’ to think maybe all this hype is a bad idea? Ryan’s a whole lot smarter than Biden, and Biden is a walkin’ catastrophe. He’s like the political equivalent of Mentos and Coke. There’s a reason why Biden hasn’t done a TV interview in five months – it’s became the last time he did that, he came out for gay marriage and made Obama follow suit or else a lot of his big donors would put the screws to him.

And now he’s not going to have Andrea Mitchell or George Snuffaluffagus or whoever to massage his crank for him; he’ll have that Ryan guy who’s torched his boss on C-SPAN already.

So, yeah – this is like LSU playin’ Towson State. Everybody expects Ryan to clobber him. But if Ryan only wins the thing by 16 points, like LSU did with Towson State, it’ll feel like a loss because of all the hype.

Don’t get me wrong. I thought this thing was great. Funny and all. But we’re gonna make it impossible for Ryan to get credit for winning the thing unless he makes Ol’ Joe drop an F-bomb halfway through it at the rate we’re goin’.