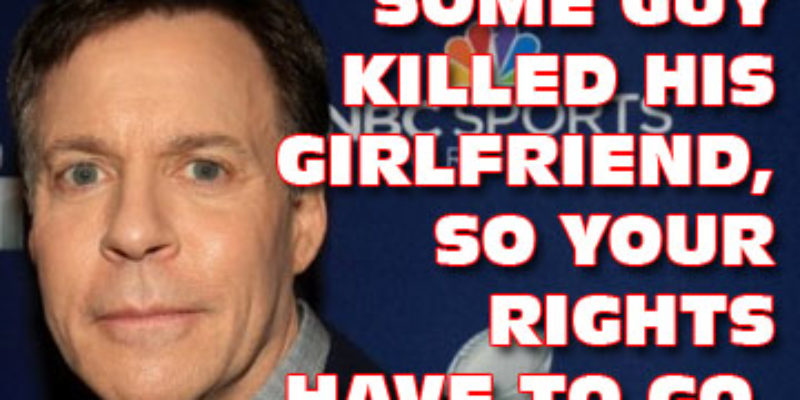 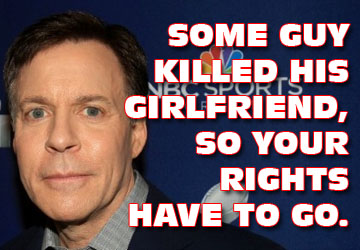 What was it Thomas Mann said?

“There is nothing that is not political. Everything is politics.”

Most of us would prefer that not to be true. Most of us seek a refuge from politics. Some find it in religion. Others, in gardening. Still others in the theater or at the ballet.

For some of us it’s sports. And football, in particular.

Which is why we find it so offensive and nauseating when our attempts to retreat from politics with non-political pastimes are intruded upon by those who fail to recognize their place.

This weekend, it became clear that neither NBC’s Bob Costas and the Kansas City Star’s Jason Whitlock know their places. Both were too interested in abusing the attention of sports fans to carry a political agenda to recognize they’re not paid to bloviate on such subjects.

The counter-argument, of course, being that Costas and Whitlock were topical. Because on Saturday morning Jovon Belcher, a 25-year old linebacker for the Kansas City Chiefs, decided to resolve an argument with the 22-year old woman with whom he fathered a child out of wedlock by slaughtering her in front of his mother and their child with a handgun. He shot her several times, and as she lay dying, he drove to the Chiefs’ practice facility, crashed through the gates and ultimately shot himself in the head in front of general manager Scott Paioli and head coach Romeo Crennel after thanking them for the opportunity to play for the club.

Belcher’s actions were bizarre. They are indicative of a failure in character so pronounced as to be unrecognizable by decent people. And of course we’re now being told that he was a “good, good person” who “took genuine pleasure in bringing happiness to others” and so forth.

And perhaps those comments reflected the actual experiences of those who knew Belcher before he journeyed to the dark side.

But decent men don’t murder the mothers of their children. They don’t do it in front of their own mothers. And they certainly don’t force their peers and superiors to serve as eyewitnesses to their suicides.

Belcher’s horrific character meltdown was a tragedy. A senseless tragedy, in fact. This is something we should all recognize. And as a senseless tragedy it was most definitely not a political event.

At least, not until Whitlock and Costas determined to use it as a “teachable moment” to push a leftist assault on the rights of the 300 million-plus Americans who aren’t a danger to our loved ones.

Whitlock was first. In a Kansas City Star column Sunday, he insulted those of his readers who lawfully own firearms by suggesting that because of Belcher’s actions their 2nd Amendment rights should be forfeit…

I would argue that your rationalizations speak to how numb we are in this society to gun violence and murder. We’ve come to accept our insanity. We’d prefer to avoid seriously reflecting upon the absurdity of the prevailing notion that the second amendment somehow enhances our liberty rather than threatens it.

How many young people have to die senselessly? How many lives have to be ruined before we realize the right to bear arms doesn’t protect us from a government equipped with stealth bombers, predator drones, tanks and nuclear weapons?

Our current gun culture simply ensures that more and more domestic disputes will end in the ultimate tragedy, and that more convenience-store confrontations over loud music coming from a car will leave more teenage boys bloodied and dead.

In the coming days, Belcher’s actions will be analyzed through the lens of concussions and head injuries. Who knows? Maybe brain damage triggered his violent overreaction to a fight with his girlfriend. What I believe is, if he didn’t possess/own a gun, he and Kasandra Perkins would both be alive today.

That is the message I wish Chiefs players, professional athletes and all of us would focus on Sunday and moving forward. Handguns do not enhance our safety. They exacerbate our flaws, tempt us to escalate arguments, and bait us into embracing confrontation rather than avoiding it.

This wildly irresponsible display of ignorance shows why Whitlock should stick to sports, where he is possessed with a modicum of expertise, and refrain from social commentary. It’s clear he understands nothing of constitutional law and not much more of public policy.

But drivel such as that offered by Whitlock in the morning paper was bound to be parroted in the evening broadcast once NBC’s Bob Costas, perhaps the most flagrantly leftist sportscaster on the air now that Keith Olberman has been put to pasture, latched onto it…

The shameless politicization of the Belcher case is offensive enough for its opportunism and preachy arrogance. That might be bearable if either of these blowhards had the faintest clue what they were talking about. But of course, that isn’t the case.

Do these self-appointed criminology experts think there was no gun violence in the 18th century when the Founders insisted on protecting the individual right to bear arms?

“They who can give up essential liberty to obtain a little temporary safety deserve neither liberty nor safety.”

And what of the places in this country where that right is restricted?

Washington, DC and Chicago have two of the most restrictive gun control regimes in America. Has the sacrifice of liberty produced any safety there?

It has not. Those are two of the most dangerous cities in the country in which to live. And the murderers there are just as prone to use guns as their weapons of choice – or are more so – as murderers anywhere else.

Interestingly enough, criminals who would use guns to kill their fellow man aren’t all that impressed with what the law says they can have.

But to Costas and Whitlock, the facts are inconvenient and irrelevant. What’s important is that because they want to appear to have serious and meaningful opinions about serious and meaningful issues rather than be satisfied with their roles as sports commentators, our enjoyment of a respite from politics had to be disturbed and we had to be told that the God-given right to self-defense enshrined in the Constitution by far greater men than Whitlock and Costas is no longer operable.

And that if Jovon Belcher hadn’t had a gun neither he nor his girlfriend would be lying on slabs, which is entirely not in evidence. She was shot multiple times – he couldn’t have taken a hammer to her? A nine-iron? A steak knife?

Jovon Belcher and his girlfriend are dead because of his character flaws, not his gun. And certainly not our fundamental right to bear arms.

So the next time Whitlock and Costas feel the need to pretend they have something valuable to say about society, we’d consider it a favor if they could at least lay off our constitutional rights.

Not that we expect any favors.