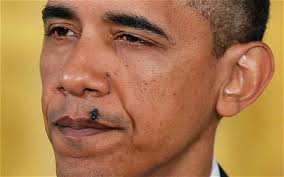 The past couple of days have been a hoot with pictures of Beaurat Obama having individual flies land on him. The comedians and disaffected have been alluding to the fact crap attracts flies and it’s always going to be that way. There are archival photos and videos of the Cheesy Executive swatting, dodging and brutally killing his most ardent admirers. (Kind of like the way he treats Americans.) I’m surprised the Sierra Club and ASPCA haven’t sanctioned him for cruelty to animals.

But, in light of the obvious jokes about the “fatal fecal attraction” Obama has for his fecal food chain, I’ll suggest his new title of “Lord Almighty of the Flies”.

Beelzebub translates roughly to “the Lord of the Flies”. Beelzebub is a devil created lusts in priests, rules with tyrants and causes men to worship devils and demons rather than to worship god. A great player of politics, Beelzebub was also supposed to be an instigator of wars and corrupter of leaders. (Sound familiar?)

The name Ba‘al Zebûb (Beelzebub) is in 2 Kings 1:2-3, 6, 16. King Ahaziah was seriously injured in a fall. He sent messengers to inquire of “Ba‘al Zebûb” a Philistine god to learn if he’d recover. Elijah the Prophet condemned Ahaziah to die by God’s words because Ahaziah sought counsel from Ba‘al Zebûb rather than from God. Hebrew scholars interpreted the title of “Lord of Flies” as the Hebrew way of calling Ba’al a pile of dung and comparing Ba’al followers to flies.  (Source: Bible-King James Version & Wikipedia)

The rest of the story concerns Ahaziah’s handling of Elijah’s message he was going to die. Ahaziah sent three captains of the guards and a total of 150 soldiers (over time) to arrest Elijah and bring him before Azahiah. Twice the individual captains and his fifty men (total 100), were struck down in a hail of heavenly fire. The third Captain (having finally gotten the message) begged Elijah for mercy and was escorted by Elijah back to the King’s Court. Elijah passed on God’s word and Ahaziah died from God’s judgment.

In light of Obama’s inability to bring productive government practices, realized through bipartisan cooperation putting party-line politics in the background and working for the common good of the people, seems to be suffering Elijah’s Curse. He hasn’t gotten anything substantive accomplished since he ramrodded the Affordable Care Act up the American peoples’ poop-chute. It’s unlikely he’ll get anything else done with his attitude toward negotiation and bipartisan effort to legislate. He doesn’t really play well with others.

I’d suggest Elijah has descended the mount and Obama’s political career merely awaits the historically precedent 180 days-long working period to prove me wrong. It’s historically determined any second term incumbent has approximately 180 days to define and pass on a legacy of advancements in legislation; then he wanders into the mortally wounded realm of the lame duck and obscurity.

We can hardly wait.

The latest attempt to define the Obama Administration was delivered in his inaugural address. More “Hope and Change” pap pandering to his core elements of whackos, sycophants and ideologues was announced to people with no understanding of the costs of such idealistic endeavors. While I want clean air for my children and naturally pure water for them to drink, I’m not so stupid as to believe this idiot’s going to get them for us in 4 years. Look at the debacle Solar Energy has become. Beyond speech-making, he’s NOT a leader and is more a bully demanding compliance with his wishes than accomplishing what America needs.

Obama’s a straight-line, hardline Progressive demanding we accept Executive Edicts he sees benefiting the state over the individual. He’s a statist ideologue with no desire to promote individual liberties or the sanctity of the Constitution and the Bill of Rights.

To many of us, he’s “Ahaziah-Ba‘al Zebûb” Obama. Elijah’s come down from the hill to deliver God’s wrath. It’s evident in the stagnant way Obama’s “governs” while reclining on his ideology he’s more like a man awaiting a death sentence.

Beside that: 6 trillion flies can’t be wrong as to what he really is.