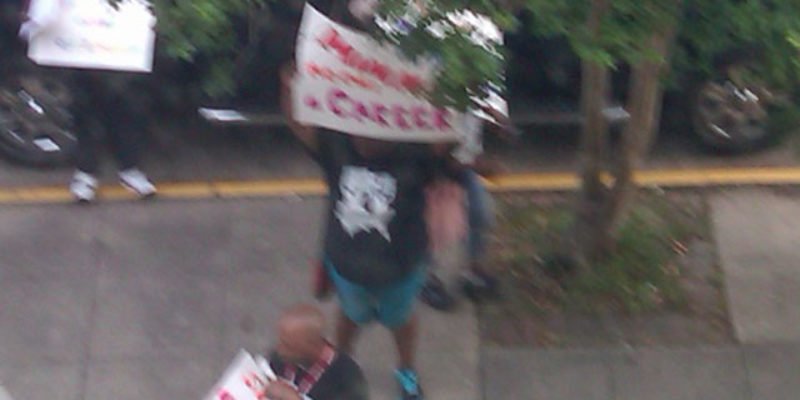 Kudos to the New Orleans Workers’ Center for Racial Justice (yes, I know, but that really is who they are) for one of the most entertaining protests I’ve seen in a while. About a dozen half-dressed welfare recipients in shower shoes holding up signs they obviously couldn’t read outside of the City Club in downtown Baton Rouge.

The NOWCRJ is one of those idiotic Hard Left “community organizing” outfits funded by other Hard Left foundations. Their most recent disclosure says they went through about $1.5 million in 2010, which is saddening.

Tonight’s protestors were griping about the Associated Building Contractors, whose legislative reception tonight was their target, having supported a bill in 2011 which bans project labor agreements in public contracts. Given that ABC is a collection of non-union contractors, this isn’t a particular surprise, and yet the protestors, who bore t-shirts emblazoned with the logo of Stand With Dignity – a division of the NOWCRJ – were passing out fliers howling about “RS 38:2225.5.”

It seems that law on the state books invalidated a 2012 deal NOWCRJ secured with the Housing Authority of New Orleans which had established a “Community Workforce Agreement” requirement for all projects with collective contracts of $25 million or more.

What’s a Community Workforce Agreement? It’s the same thing as a project labor agreement. From Wikipedia…

A Project Labor Agreement (PLA), also known as a Community Workforce Agreement, is a pre-hire collective bargaining agreement with one or more labor organizations that establishes the terms and conditions of employment for a specific construction project.[1] Before any workers are hired on the project, construction unions have bargaining rights to determine the wage rates and benefits of all employees working on the particular project and to agree to the provisions of the agreement.[2][3] The terms of the agreement apply to all contractors and subcontractors who successfully bid on the project, and supersedes any existing collective bargaining agreements.[2] PLAs are used on both public and private projects, and their specific provisions may be tailored by the signatory parties to meet the needs of a particular project.[3] The agreement may include provisions to prevent any strikes, lockouts, or other work stoppages for the length of the project.[2] PLAs typically require that employees hired for the project are referred through union hiring halls, that nonunion workers pay union dues for the length of the project, and that the contractor follow union rules on pensions, work conditions and dispute resolution.

On the flyers the Stand With Dignitarians were passing out, which as it turns out had an unusual spelling on their second line (NEW ORLEANS WOREKRS’ CENTER FOR RACIAL JUSTICE) that was trumped only by the spelling of the first line (STAND WITH DIGINITY), the goofball nature of the protest was laid out in technicolor…

“We need to rebuild our communities- not just the buildings in them. But how can we do that if local workers are locked out of the reconstruction? Did you know that in the New Orleans metro area Black Household earning income is 50% less than white households? When Black workers are locked out of living wage jobs and opportunities to build career ladders this gap will only continue to grow.

Stand With Dignity has been fighting for full and fair employment for the past three years. In March 2012, we were excited to win a major victory from HANO in the passage of the new Employment, Training and Contracting Policy at HANO. This policy includes groundbreaking language requiring a Community Workforce Agreement on all projects with collective contracts of $25 million or more…

The Associated Builders and Contractors have been pushing for and winning laws which erode the training infrastructure in Louisiana. At the same time contractors are crying for more skilled workers they are working to destroy the infrastructure which has done the most to build skilled craftspeople.

As it turns out, ABC operates training schools for construction workers in both Baton Rouge and Lake Charles. What the NOWCRJ is complaining about is that the “training infrastructure” they do isn’t within the context of a union – unions traditionally were the operators of training programs for tradesmen, but not so much anymore.

Think about how frightening and stupid the statement above is. Essentially what it says is “we deserve the right to use politicians to steal money from contractors.” Alexis de Tocqueville, upon seeing something like this, would have returned to France and declared the American democratic experience to be kaput.

And a bit more…

It is the duty of our elected officials to fight for all their constituents, not just the ones who can put on fancy cocktail receptions. Louisiana must use the funding that is coming through our state to rebuild our families, and our communities- that means making it go further by keeping the money in our communities and using it to build the career ladders that community members needs and deserve to build a thriving community.

Of course – because unions always use their dues money locally. None of that gets kicked upstairs to Jimmy Hoffa or Richard Trumka or the SEIU’s main offices, right?

The Stand With Dignity rabble tried to crash the ABC reception, and got thrown out of the City Club. When that happened they were reduced to milling about aimlessly, mumbling to passersby while passing out flyers and halfheartedly accosting people going in and out of the building.

And holding up gloriously, if unintentionally, funny signs.

The best of the bunch: A 60-year old woman with a sign that said “My Mommy Needs A CAREER.” 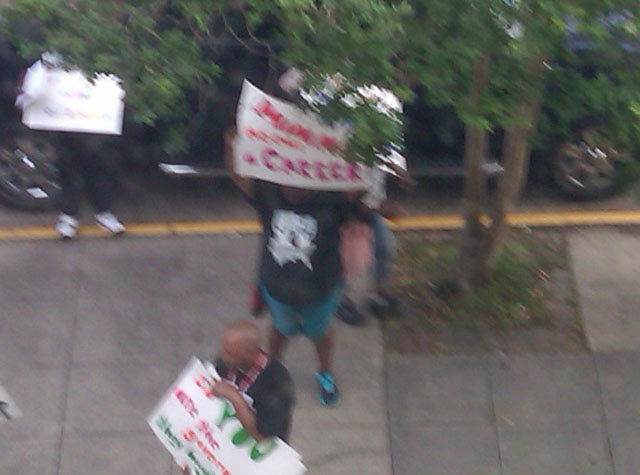 Lady, it’s a bit late in the day for your mommy to have a career.

Second best was the other lady holding up the sign saying “We Won’t Be Locked Out No More,” which prompted the guy next to me watching the show to say, “Locked out of what? School?” 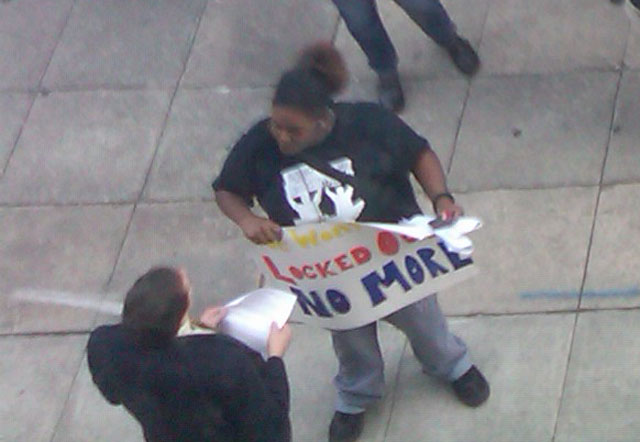 But the funniest picture from the protest, and the one which showed how completely clueless the protestors (all of whom were black, which of course wasn’t a colossal surprise given the name of the organization conducting the protest except for the fact the lady who seemed to be in charge was white – and what does that say about that outfit?), was this… 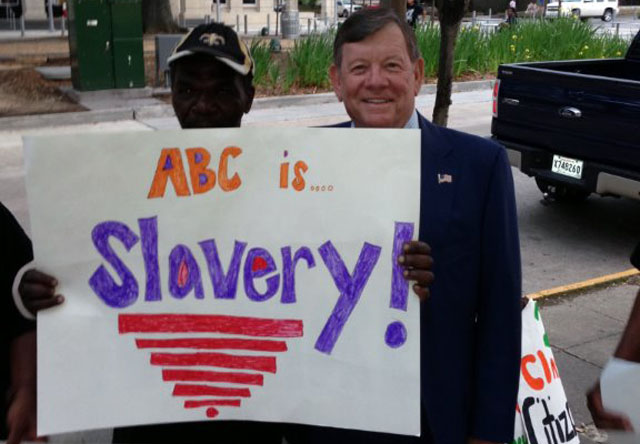 Who’s the guy on the right? Nobody special. Just Lane Grigsby, head of Cajun Industries and a past president of ABC. The guy holding the “Slavery!” sign hasn’t the first idea how big a joke he is. And probably doesn’t care, since he got his walking-around money for holding goofy signs for a couple of hours.

By sundown Tuesday, the Stand With Dignity brigade had decamped for more lowbrow locales than the City Club. But the reception was just getting started, with legislators, businessmen, lobbyists and other people who can spell “dignity” enjoying the miniature crawfish pies and crabmeat-stuffed mushrooms.

As a matter of political persuasion, one would have to call the organization’s efforts on Tuesday less than effective. Certainly not enough to justify the $1.5 million the Soros crowd spits at them on a yearly basis.

But as a matter of comedy…well, that’s a horse of a different color, isn’t it?

Interested in more news from Louisiana? We've got you covered! See More Louisiana News
Previous Article SADOW: Sifting Through The Ruins Of Tax Reform
Next Article How Big A Mess Is The Tax Reform Failure?