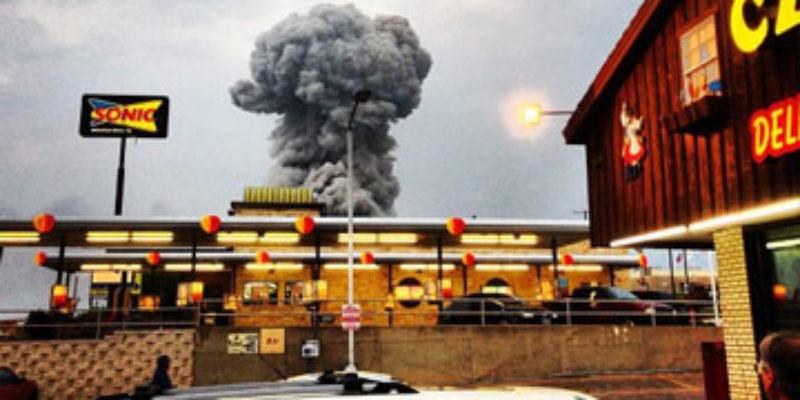 Apparently there was a fire at a fertilizer plant today in West, Texas, which is a small town near Waco, and somehow it rekindled after it was put out.

Then there was an explosion. Then another.

This was the second one. Scary, scary stuff…

The preliminary word is as many as 60-70 dead and a good bit of the town is wasted.

Debby Marak told The Associated Press that when she finished teaching her religion class Wednesday night, she noticed a lot of smoke coming from the area across town near the plant, which is near a nursing home.

She said she drove over to see what was happening, and that when she got out of her car two boys ran toward her screaming that the authorities told them to leave because the plant was going to explode. She said she drove about a block before the blast happened.

“It was like being in a tornado,” the 58-year-old said by phone. “Stuff was flying everywhere. It blew out my windshield.”

She drove 10 blocks and called her husband and asked him to come get her. When they got to their home about 2 miles south of town, her husband told her what he’d seen: a huge fireball that rose like “a mushroom cloud.”