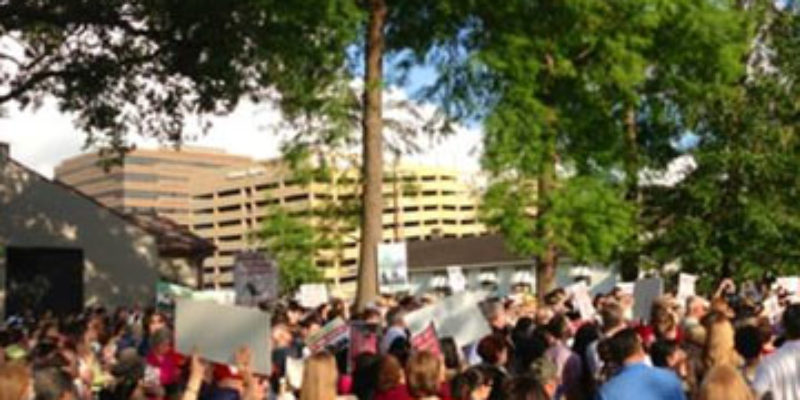 That’s what WWL-TV said in their story about the protest yesterday on the site of Planned Parenthood’s soon-to-be-constructed abortion mill.

A plan to open a new Planned Parenthood facility on Claiborne Avenue is sparking mixed reaction.  On Monday night a group opposing the project held rally which also brought out supporters of the clinic.

“Who is all excited to be here standing for life!” said Abby Johnson to a large crowd armed with signs and strong pro-life beliefs. Dozens showed up to protest a new Planned Parenthood facility on Claiborne Avenue.
“We have to bring peace on the streets of New Orleans, and we have to make sure that there’s peace in the womb of a woman,” Archbishop Gregory Aymond said.
Planned Parenthood Gulfcoast says once built, its new facility will offer the same women’s reproductive healthcare services it currently provides at its Magazine Street location, including access to birth control, STD/HIV testing and cancer screenings.
“Murder doesn’t only occur in the streets. It occurs in facilities just like the one that’s trying to be built here unless we stand,” said Abraham Hamilton with Gideon Fellowship Church.
A group calling itself Nola Needs Peace made up of pro-life activists and churches says the new facility will focus primarily on abortion.

Well, here’s a photo from the event. Dozens, indeed. Dozens of dozens, one might say.

The Planned Parenthood crowd says the facility will be all about AIDS screening and breast cancer screening and so forth. While some of that might be true, if that’s what they were really up to nobody would care.

Planned Parenthood is about abortion. They’re about doing what Kermit Gosnell did. And they’re setting up that abortion mill on Claiborne Avenue just down the street from the Magnolia Housing Projects for a good reason – namely, that true to the spirit of their genocidal racist founder Margaret Sanger they’re all about “population control” among black people.

Interestingly enough, as monstrous as Margaret Sanger was, she actually opposed abortion. She was all about sterilizing people and birth control. Her descendants in the cause of eugenics use more aggressive methods.

And the abortion mill on Claiborne Avenue, which is supposed to be up and running in two years, will be the focal point of this controversy for the foreseeable future. There will be “dozens” of people holding demonstrations often; that you can bank on.

Interested in more news from Louisiana? We've got you covered! See More Louisiana News
Previous Article The WWL Piece On Buddy Caldwell You Simply Won’t Believe
Next Article SADOW: No, We Don’t Need A Department Of Elderly Affairs

"Give my regards to your puppet master." - Elon Musk, to a Washington Post reporter attempting to interview him for an unfriendly piece. The Post's owner Jeff Bezos also owns a competitor to Musk's SpaceX venture.
More Quotes