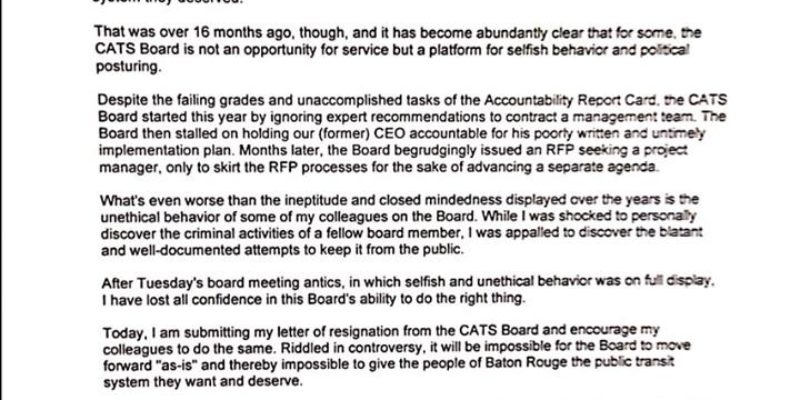 We promise not to say “I told you so” in this I-told-you-so moment.

Former Baton Rouge Capitol Area Transit System board chairman Jared Loftus has tendered his resignation. Loftus, who’s a successful young entrepreneur and a Republican, became interested in public transit and four years ago joined the CATS board of directors. In that position he participated in the effort to pass an $18 million-a-year tax hike in Baton Rouge to fund the system, which no one uses, in the belief that as then-chairman he would be in a position to see to it that those funds would not be misused.

A few months after that tax passed, Loftus was ousted from his chairmanship in a CATS board coup d’etat which had elements of an event the 1712th anniversary of which will be celebrated on Saturday. And once that happened, the full spectrum of what that tax increase would go to pay for became manifest, to Loftus’ horror.

And so today, after a white former CATS employee sued for racial discrimination, the CFO resigned over $120,000 in fare revenues which have vanished into thin air, evidence of a lucrative do-nothing IT contract with a pal of the board’s chairman was uncovered and said board chairman was ousted despite his best efforts to hold onto the reins (after the previous chairman had been similarly sent packing for a slew of under-the-table deals), something happened that has been inevitable since earlier this year.

Loftus resigned, and in doing so set fire to the entire enterprise… 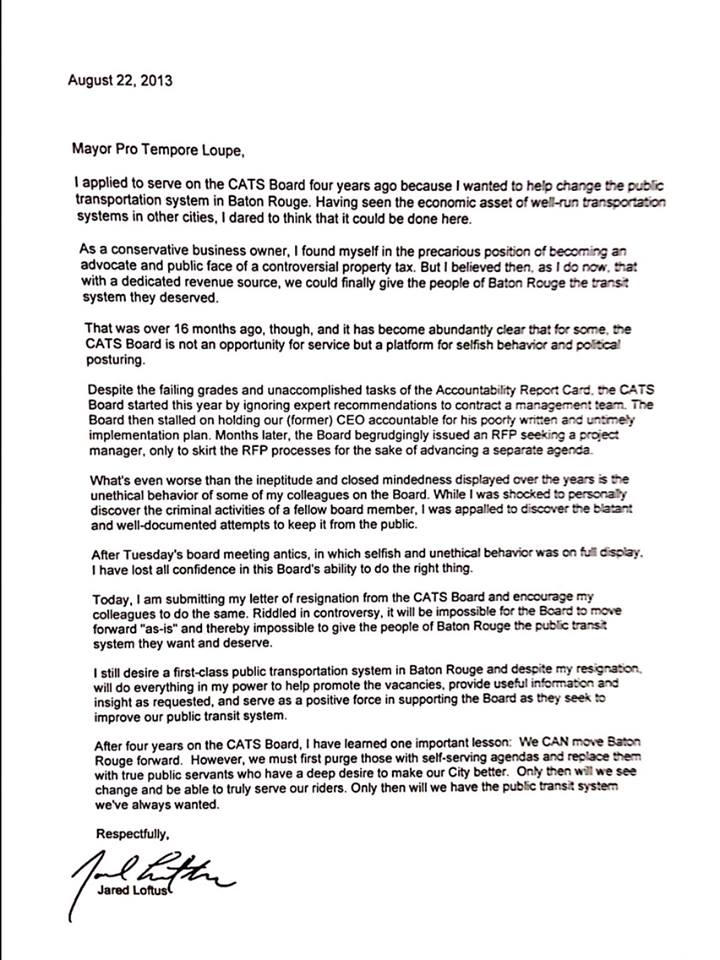 Loftus’ resignation isn’t good news, as despite his misguided advocacy in favor of more money for a failed legacy system when there are cheaper, economically viable and more effective business models available he actually was on the board with the rather curious motive of trying to provide transportation. That made him nearly unique – the majority of the CATS board is much more in tune with its real purpose of distributing public dollars to favored constituencies and political cronies.

Meantime, there’s a new CATS chairman. His name’s Marston Fowler, who is a local attorney. We don’t know him. We hope he’s a good guy, and honest. His father was the state elections commissioner before spending time in prison on charges he bought voting machines for the state from their manufacturers at inflated prices in return for $900,000 in kickbacks.

And CATS will continue to receive $18 million per year in property tax dollars for the next nine-plus years regardless of which crooks and rubes populate its board.

UPDATE: A note from Metro Councilman and CATS board member Ryan Heck, who is a member of the anti-corruption faction on that board…

“I’ve known Marston for years and I have no doubt about his integrity. You can print that.”

So there’s that, which seems cause for optimism.