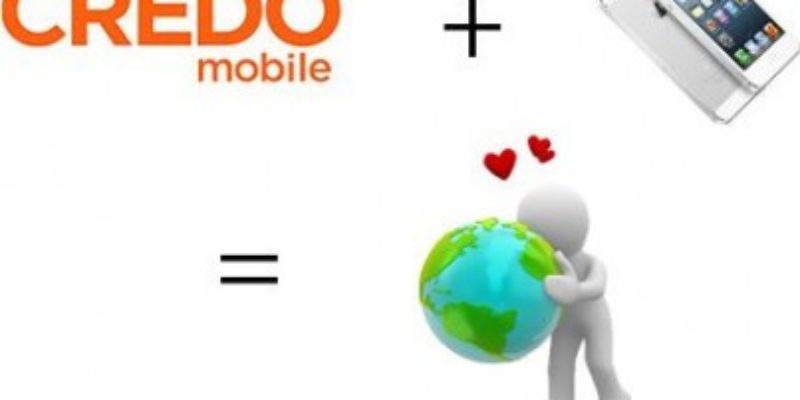 We managed to get hold of something last week that, if you’re a conservative and you take a look at it, will fill you with a mixture of horror and admiration.

A mixture of horror and admiration is a very, very bad mixture in politics. But that’s what you’re going to feel when you look at what the Left is doing with CREDO Mobile.

What’s CREDO Mobile, you ask? When I tell you, you’ll be filled with a mixture of horror and admiration.

CREDO is a cell plan which buys wholesale cell service (they’re a Mobile Virtual Network Operator, or MVNO, of which there are some 9,000 around the country) and markets it to consumers through its own business model.

A percentage of our customers’ charges are sent to progressive nonprofit groups that work on a range of issues: from global warming to humanitarian aid, from economic justice to marriage equality. Our members and activist friends help us pick the groups each year and vote on how to distribute the donations among them. Since 1985, we’ve raised $75 million for such groups. In 2012 alone, we raised more than $2.8 million.

If you get your cell service through CREDO, one percent of your bill every month goes to one of these outfits at your discretion (these figures are just for 2012)…

That’s something of a who’s who of horribles, and almost all of them are dedicated not so much to getting lefties elected to public office but to something more basic – namely, moving the political culture to the left. It’s a collection of Marxist pressure groups who drive headlines and news coverage, mobilize the dependent and the despondent to stand on street corners with signs and indoctrinate kids into ideology which is inimical to the kind of America the majority of this country does not want.

CREDO also works directly to get people elected. And in last year’s election cycle they took aim at 10 members of Congress who identified with the Tea Party.

2012 was a huge year for CREDO. We launched the CREDO SuperPAC, playing a major role in defeating five of the worst Tea Party Republicans in Congress. In the process, we rewrote the book on superPACs, raising $2.5 million from 70,000 small donors for a volunteer-driven campaign that went toe-to-toe with big money and corporate interests—and won. We also helped win 24 key state initiative fights for marriage equality, the environment, human rights and sanity in election spending.

CREDO’s other wins: they got together with Van Jones to successfully pressure ABC News into excluding Andrew Breitbart from being part of that organization’s on-air panel for its election night coverage of the 2010 midterms, they mounted a phone and email campaign to pressure Texas Lt. Governor David Dewhurst into refusing to declare Wendy Davis out of order during her filibuster of that state’s abortion ban earlier this year, they’ve gotten anti-fracking legislation passed in a number of states, they’ve been effective in marijuana decriminalization efforts, they helped pressure the Susan G. Komen Foundation into continuing to fund Planned Parenthood, they helped pressure a number of Rush Limbaugh’s advertisers into getting out of his show (which incidentally had the effect of hurting many of those advertisers who pulled out, as well as hurting left-wing talk radio in the bargain because those who pulled out of Limbaugh were often advertising with lefties as well and ultimately decided to get out of both sides), they’ve helped environmentalist loons block the Keystone XL Pipeline so far, and lots of other things.

VICTORY FOR NO-COST BIRTH CONTROL
We fought hard and ensured that President Obama did not restrict access to no-cost birth control at the heeding of the Catholic bishops who had already delayed this fight for a year. We then successfully fought the Blount Amendment in the Senate, which would have blocked our hard-won victory and legislated new limits on access to no-cost birth control. No group submitted more public comments than CREDO Action to the president’s Health and Human Services agency lobbying for birth control to be treated as preventative health care under the Affordable Care Act.

There’s an astonishing amount of money and activism coming from these people. And while the Left is awash in cash from the George Soros types, who are more than happy to lavishly fund left-wing pressure groups even when they’re completely ineffective (a local example can be found here), the CREDO business model is something just as powerful.

CREDO has over 300,000 subscribers. CREDO built much of that base by working with the Daily Kos – they helped that site pay its bills and in the bargain got the loons who read it to sign up in droves.

And at the Daily Kos you’ll see things like this quite often.

The genius of this plan – it’s time to inject some admiration into this post to go with the horror – is that it leverages something everyone needs and uses with social entrepreneurship and political activism. Everyone has a cell phone. Paying a cell bill every month is something you’re going to do no matter how much money you make. So making your cell bill a vehicle for supporting causes you care about is a no-brainer for almost everybody.

CREDO figured that out, and they’re now a major player on the political scene.

Up until very recently, there was no conservative answer to CREDO. But that’s for another post…

Interested in more national news? We've got you covered! See More National News
Previous Article HUSTMYRE: An Open Letter To The Missouri NAACP
Next Article SARGE: Back To The Future, Kinda