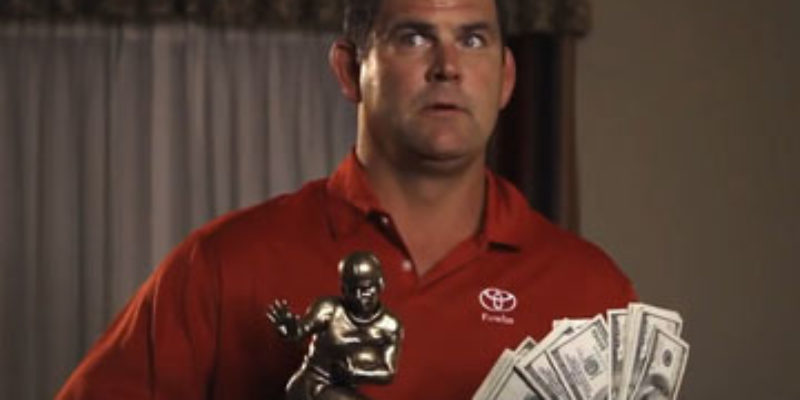 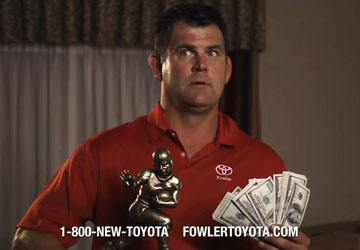 Y’all prolly heard by now that this Johnny Matzo, or Johnny Mazeltov, or whatever his name is – Johnny Football, they call him; the kid what won the Heisman last year – got off pretty much scot-free for gettin’ paid to sign autographs all summer.

Everybody knows the kid god paid for signin’ those autographs. Everybody. The NCAA knows it, too, but here’s their problem.

They can’t prove it.

The NCAA can’t give out those suppeenies like the D.A. or Eric Holder can. So when they axe questions you can tell ’em to stick it in the pooper.

Which is pretty much what Johnny Football and his dad and everybody else involved did. They said “Naw, no money changed hands in the multiple times when a professional autograph broker set him up to sign those autographs – that’d never happen!”

Except “blee dat” don’t quite work as a standard of proof for the NCAA. You wanna ban the Heisman Trophy winner for pretty much turnin’ pro – and chargin’ for your autograph because you’re a famous athlete sho nuff makes you a pro athlete, which you can’t be if you’re gonna play college ball – you better be able to prove it.

So Johnny Football gets away with it. Sucks, but that’s innocent until proven guilty for you, and that’s the way we do stuff.

Except people have all kindsa ways to get justice.

Turns out one way is to spoof ol’ Johnny to make money. Like sellin’ cars, for example. Some cat who sells Toyotas in Oklahoma decided he’d go to town on Johnny Football, and he’s gonna make a killin’ with this ad…

That’s some brilliant stuff right there.

And there ain’t a thing Johnny Football can do about it, neither.

You’ll notice that Toyota guy is in Norman, Oklahoma. Safe to say he’s prolly an OU fan, which means he ain’t great with the Aggies.

So if Johnny Football and his dad get their blood up about this and wanna sue, guess what Toyota guy’s gonna do? He’s gonna say I didn’t libel or defame you, I told the truth about you. And guess what else? He’s gonna have the ability to file some discovery about it.

Which Johnny Football don’t want, because if he gets into that briar patch and Toyota Sooner Dude’s attorneys find some proof he took that money, well…

That’s when the NCAA might come in and suspend him for another half. Like half his life or whatever.

So he’s gotta take it, and he’s gonna get some shame for signin’ those John Football Hancocks.

Shame ain’t a bad thing. And ridicule is downright awesome. Well, that’s the First Amendment for ya.

Almost makes me wanna go up to tornadoland and buy a Toyota. I think I can fight the temptation, but it’s a solid commercial anyway.

Interested in more national news? We've got you covered! See More National News
Previous Article SARGE: There Is Help Out There
Next Article Private School Parents Are Evil? So Says Slate