Remember the days when Democrats in Louisiana would romance the public about how they were old-fashioned conservatives due to their pro-gun, pro-life and ESPECIALLY pro-oil stances? Mary Landrieu is more or less the last of those, even though she’s lacking on that score. It turns out that the Southeast Louisiana Flood Authority’s lawsuit against Every Oil Company On Earth for their complicity in Louisiana’s declining wetlands has become a cause celebre among those on the Left in Louisiana.

Proof can be found in something which surfaced today. It’s a letter from Foster Campbell, who after Landrieu might be the most prominent elected Democrat in Louisiana (Campbell’s Public Service Commission district covers one-fifth of the state’s population, which means he represents more people than Rep. Cedric Richmond, whose congressional district is one-sixth of the population, or any of the state’s Democrat mayors) to Karen Carter Peterson, the chair of the Louisiana Democrat Party.

And it’s a full-throated endorsement of the lawsuit, in a fashion the John Breauxs, J. Bennett Johnstons and Chris Johns of the world would lose their lunches over… 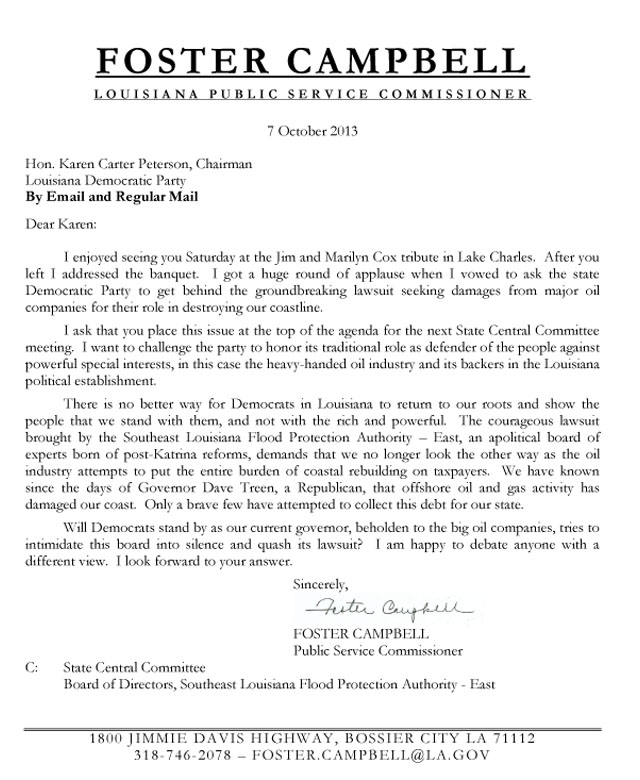 Campbell pushing for an endorsement of the lawsuit could well drain the remaining centrists in Louisiana out of the Democrat Party, and it’s a great voter registration tool for the state GOP.

Because while it’s entirely possible to make the case that the infrastructure built to support the offshore oil industry has had a deleterious effect on Louisiana’s marshes – for example the canals cut through those marshes to facilitate pipelines have been conduits for saltwater intrusion, with all the resultant changes that entails, that hardly confers legal liability to the oil companies for the damage.

The fact is that Louisiana – and the federal government, out of whose pockets most of the cost to fix the wetlands will ultimately come – has been collecting royalties from the oil companies ever since offshore drilling began. That’s what a royalty is for – the oil company uses your land to extract minerals, and pays you for everything inherent in the use of that land.

If the state and the feds didn’t use the royalties they received from the oil industry to act as wise stewards of the land being used, it’s not the oil companies’ fault – it’s the fault of stupid and/or corrupt policymakers who allowed the damage to occur.

One could make a case that the real reason for the wetlands loss is the fact the Mississippi has been leveed all the way to its mouth and thus fails to deposit fresh silt every spring to replenish the marsh. But to the extent the oil industry is at fault, the trial lawyers Campbell wants Peterson and the rest of the state’s Democrat muckety-mucks to side with will have to prove not only malice or negligence on the part of the oil companies who destroyed that land but a lack of same on the part of the landowners – who in this case aren’t ignorant country rubes but elected policymakers and their appointees (which we will stipulate are not mutually exclusive classes of folks, but nonetheless).

The suit is a hopeless cause. It’s an attempt to get headlines and shake the oil companies down for a settlement. It’s all about trashing the oil companies in the media so that they’ll opt to buy their way out of media jail and allow the members of that board to get invited to the finest dinner parties in Uptown New Orleans.

But this legalistic onanism is right up Bananas Foster’s alley, and since the pursuit of headlines is his specialty (it appears he hasn’t quite had enough negative headlines in his life to make him realize that sword cuts both ways) it’s only natural that he’d be playing Pied Piper here.

The question is whether Peterson, who is a bit smarter than Campbell but no less of a left-wing loon, will follow him off the cliff.