After yesterday offering up the Washington Socialist line about how everybody who’s losing their insurance thanks to Obamacare didn’t have REAL health insurance and so it’s OK for the government to kill it, Mary Landrieu took a step back today.

That would be the charitable way to describe what she’s done. Another way to describe it would be that Mary got a snootful of public reaction to that statement, panicked and is now running away from what she said with her hair on fire. Because now she’s got a whole new story to tell…

Sen. Mary Landrieu said Wednesday she would propose legislation to ensure all Americans could keep their existing insurance coverage under Obamacare, a fresh sign of the political problems the law’s rollout has created for congressional Democrats.

Landrieu, a Democrat who faces a tough reelection in Louisiana in 2014, said she would either offer her own bill or formally sign onto another measure that would ensure that the law would not force anyone off of their existing health policies.

“The promise was made, and it should be kept,” Landrieu said in the Capitol Wednesday. “And it was our understanding when we voted for that bill that people when they have insurance could keep with what they had. So I’m going to be working on that fix.”

Landrieu’s comments come as the White House faces a barrage of criticism over President Barack Obama’s repeated promises in 2009 that the law would not force anyone off of their plans.

The Advocate had a little more from what she said today…

“Having said that … some of those plans did not have the best value,” Landrieu added. “Some of them are expensive without a lot of coverage because that was the only thing that was available. It was something, but it wasn’t ideal. So, as people sort through this (on the exchanges), they might find better options. But, because the promise was made, the promise should be kept.”

Her comments yesterday about how you’re only losing your health plan if it isn’t “good” insurance were made to a Weekly Standard reporter who asked her about a bill Sen. Ron Johnson (R-Wisconsin) was set to file that would protect the availability of all current health insurance plans. At the time she didn’t quite recognize the magnitude of the problem her statements have caused for her.

And today, there’s a bill. It’s not Johnson’s bill, but rather a bill by Rep. Fred Upton (R-Michigan), the chair of the House Energy and Commerce Committee… 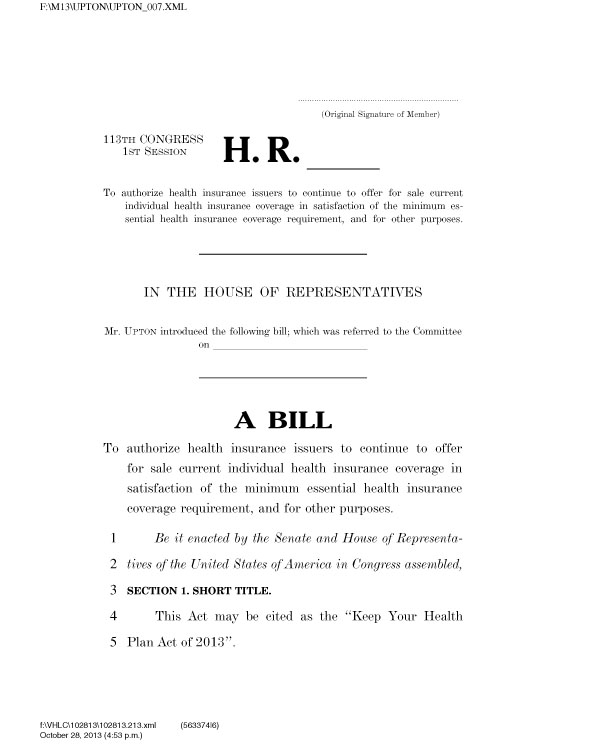 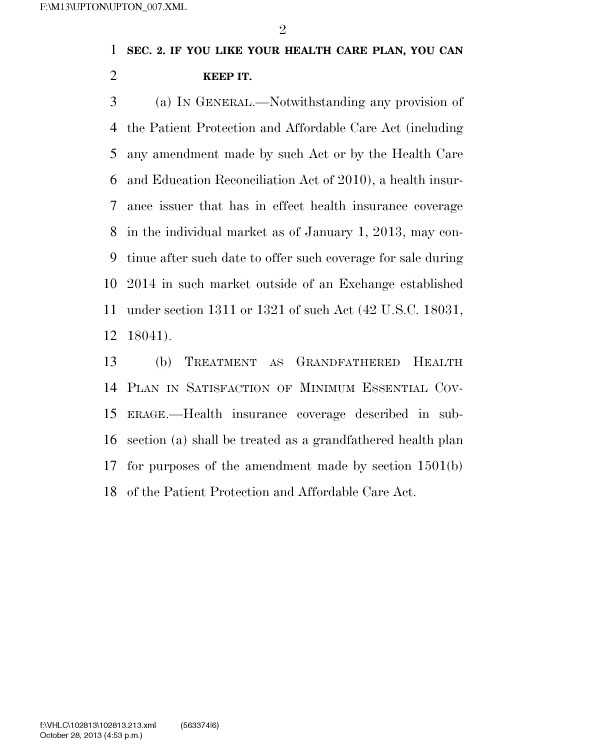 Landrieu hasn’t said whose bill she’ll go for, but we can’t see any reason why she wouldn’t like Upton’s bill. It’s pretty simple, and at least for a year it allows insurance companies to offer the same plans they’re offering now.

Of course, next year’s market conditions won’t be the same as this year’s – so there’s no guarantee the insurance companies will find it feasible to maintain the same policies they did this year. And nobody is going to force them to. So it’s hard to see that bill as much more than an incremental improvement.

Of course, her main opponent in the upcoming, Bill Cassidy, has already signed on to Upton’s bill as a co-sponsor.

“Politicians who voted for Obamacare told Louisiana families they could keep their health insurance.  This has proven demonstrably wrong.  Constituent after constituent is calling my office, asking why they were deceived and why they are losing their insurance.  On their behalf, we must save their insurance and replace Obamacare with patient-centered solutions that work.”

An exit question: how many people in Louisiana are going to lose their current health plan to Obamacare? This is the magic number; with a state like Louisiana whose economy is much more heavily geared toward small business and independent contractors than a corporate-heavy state like New York, say, or Michigan, there would be the expectation of a lot more exposure to individual plans being tossed out.

And every single one of the people who had their insurance plan killed by Obamacare can now turn to Mary Landrieu, the deciding vote for passage of that law, and give her a big fat “Thanks for nothing.”

How many people will that be? She beat John Kennedy by 121,000 votes in 2008; if the number of Obamacare victims comes anywhere near that amount she’s cooked – no matter what she can salvage out of today’s retreat.

Interested in more national news? We've got you covered! See More National News
Previous Article Oh, And Here’s Mary Landrieu On Whether You Can Keep Your Plan…
Next Article Sebelius’ Testimony Today Boiled Down To This…