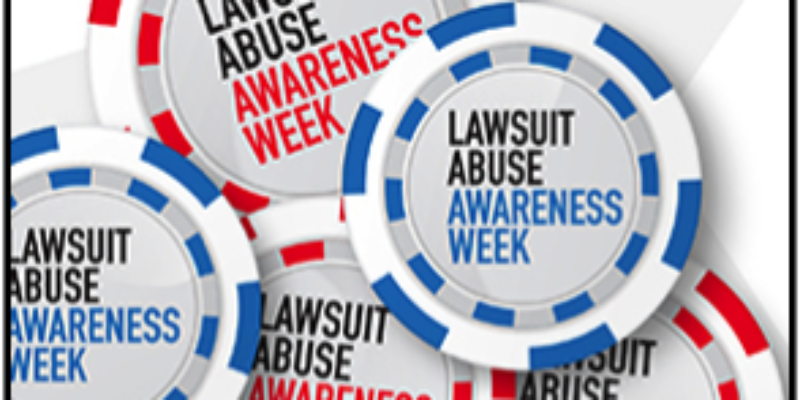 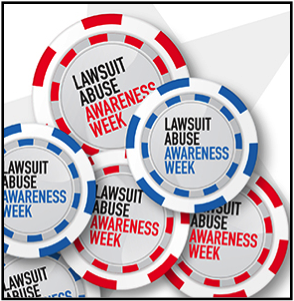 This week marks Lawsuit Abuse Awareness Week, when groups across the country stop to reflect on the negative effects of lawsuit abuse.  These effects can include increased costs of consumer goods, decreased compensation for real victims and reduced access to our courts.

Abusive lawsuits can also be a significant drag on our economy and a deterrent for job-creating small businesses.  A recent study claimed that Louisiana ranks as the second worst legal system in the nation, with a price tag of $1.1 billion in tort costs per year that could be saved if we improved our legal system. Wouldn’t you like more of that money to flow back into your pocket, rather than the lawyers’ pockets?

There are many ways we can improve our court system, but at the end of the day, stopping lawsuit abuse starts with you. What can you do to stop lawsuit abuse from plaguing Louisiana?

And of course, you can join us in the continued fight against lawsuit abuse all year long. Louisiana Lawsuit Abuse Watch (LLAW) is dedicated to curbing lawsuit abuse that hurts Louisiana families and threatens our jobs and businesses. We’re made up of people like you – engaged citizens, business leaders and health care providers – who are concerned about how lawsuit abuse is plaguing our state.

As we mark a national week focused on reforming the legal system, please take a moment to consider the part you play in stopping lawsuit abuse. We’re working hard to fight lawsuit abuse every day all year long, but we can’t do it without you.

Please stay informed about political happenings in Louisiana that have a direct impact on our state’s legal climate.  Earlier this year, LLAW launched an investigative report on the Louisiana Attorney General’s Office revealing a gravy train of contracts for politically connected trial lawyers who are carrying out much of the state’s legal business.

In the coming week, LLAW will be releasing a detailed – albeit shocking – report on a new trend that’s emerging in some Louisiana courts where judges are venturing outside of their narrowly defined role in an attempt to create new law through the judicial process.

As Louisiana’s top grassroots legal watchdog group, part of our mission is to investigate and expose this kind of questionable behavior.  Stay tuned for updates and join the fight against lawsuit abuse today!