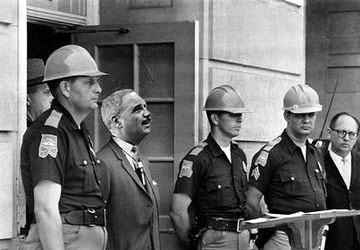 Yes, you read that headline correctly. Parents of voucher kids who would lose their chance to attend the schools they want to attend are trying to intervene in the suit, and Eric Holder’s Justice Department is trying to keep them out.

If there is a more compete, consequential repository of rank partisan hackery and clownshow faculty-club leftist ideology than the Obama DOJ, you’ll have to show it to us.

The American Federation for Children, the nation’s voice for educational choice, and the Louisiana Federation for Children, today criticized the Department of Justice (DOJ) for trying to block Louisiana parents from intervening in the DOJ lawsuit filed against Louisiana’s educational choice program. If the DOJ lawsuit were successful, an estimated 1,000 low-income families could be negatively impacted, resulting in their children being forced back into schools designated as failing or underperforming. The Goldwater Institute is representing four families who filed to intervene in the case.

“The Louisiana Scholarship Program serves low-income children who attend a failing or underperforming school, and nearly all of these children are minority. The Department of Justice is trying to kick these kids out of the school of their parents’ choice and now they’re trying to keep parents from fighting for their kids in the court room. This is outrageous, offensive to the civil rights of these children, and undermines the credibility of the Department of Justice. Rather than fighting for the rights of children, the DOJ is executing a political agenda against educational choice despite the overwhelming support, strength and popularity of Louisiana’s Scholarship Program.”

“If  DOJ doesn’t want these kids to have their day in court, then I challenge Attorney General Eric Holder to visit Louisiana, tour the schools, meet the families and hear from the children. It is their education that is at risk, and it is their rights that DOJ is trampling,” said Chavous.

In September, the Goldwater Institute filed a motion on behalf of the Black Alliance for Educational Options and four parents of students participating in the Louisiana Scholarship Program, which called on the Dept. of Justice to drop its lawsuit against the Louisiana Scholarship Program. The lawsuit, filed in August, seeks to prevent the state of Louisiana from offering school vouchers to children in school districts with existing desegregation orders for the 2014-15 school year unless the state receives authorization from the federal court overseeing the desegregation case.

To qualify, students must either be enrolled in a school ranked C, D or F or be entering kindergarten for the first time; they must also meet strict income guidelines.

Across the state, 126 schools in 34 parishes are participating in the Louisiana Scholarship Program, which was expanded statewide in 2012. Prior to the expansion, the program served children in New Orleans since its creation in 2008.

The U.S. Department of Justice filed a brief yesterday claiming that parents do not have a “right” to intervene in in the Obama Administration’s lawsuit against Louisiana’s school choice program. The Department of Justice also claims that the interest of parents in moving their children out of failing schools is “too remote to warrant intervention at this time,” and the Department says parents have a “misunderstanding” of the case. Governor Jindal called the brief offensive to parents and said the Obama Administration is trying to muzzle parents who want to give their children the opportunity to escape failing schools.

Governor Jindal said, “The Obama Administration wants to deny a voice to the very people who will be harmed by this ridiculous lawsuit. In an offensively worded motion, the U.S. Department of Justice is trying to muzzle parents who simply want to express an opinion about why their children should have the opportunity to escape failing schools.

“It gets worse, the Obama Administration claims that interests of parents who are seeking scholarships for their children are ‘too remote to warrant intervention at this time.’ To claim that the interest of parents regarding such a vital education issue are ‘too remote’ for engagement is ridiculous. Our kids only have one chance to grow up and parents should not be denied an opportunity to speak up about what’s best for their children.

Governor Jindal also noted that the U.S. Department of Justice is trying to deceive the public about the federal government’s goal in the lawsuit.

In its motion filed with the court in August, the U.S. Department of Justice wrote, “the United States asks this Court to issue a permanent injunction ordering that, beginning in the 2014-15 school year, the State may not award school vouchers to students who attend schools located in school districts operating under federal desegregation orders unless and until the State receives authorization from the appropriate federal court overseeing the desegregation case.”

Stung by the nearly universal condemnation of this effort to deprive children of the opportunity to escape failing schools, the U.S. Department of Justice now writes, in the filing to prevent parents from intervening, that “The United States is not seeking to end the Program or to take vouchers away from particular students.”

However, the U.S. Department of Justice has never withdrawn the request it made in the original motion to seek a permanent injunction of the program.

Governor Jindal said, “I have already indicated that the Obama Administration’s effort to deny these kids the right to equal opportunity in education is both cynical and immoral.  Well, it turns out it is also completely deceptive. The U.S. Department of Justice can’t have it both ways. Parents know the real result of this lawsuit, were it to be successful, would be to keep children from escaping failing schools.”

Jindal also had a link to the motion DOJ filed to keep the parents out. Essentially it reads as a little defensive, claiming that the parents don’t have standing to intervene in the case because all DOJ is trying to do is collect data on the voucher program. That might fly legally, but the optics won’t – everybody knows this case is an attack on the voucher program’s very existence. And everybody also knows the demand for information is a fishing expedition in hopes of coming up with a justification for an argument that the voucher program somehow interferes with school desegregation orders that are 40 years old and were put in place for an eerily similar purpose as the voucher program DOJ is using desegregation as a means to fight. Namely, to provide an opportunity for poor kids who are almost exclusively black to escape government-mandated inferior schools.

The question here is: when is the Louisiana Democrat Party going to go to Holder and tell him to go away before he destroys any chance they have to get anyone elected? This suit, and the indefensible effect it will have on those in the black community who are trying to better their situation, is possibly the best messaging opportunity the conservative movement and Republican Party has had within the black community in a good while, and the longer it goes on the better that opportunity gets.

Interested in more news from Louisiana? We've got you covered! See More Louisiana News
Previous Article CAP BLACK: Will Rep. Helena Moreno Help Us Fix The Home And Business Defense Law?
Next Article Right-Wing Nuts Save Baton Rouge From Another Crook On The CATS Board