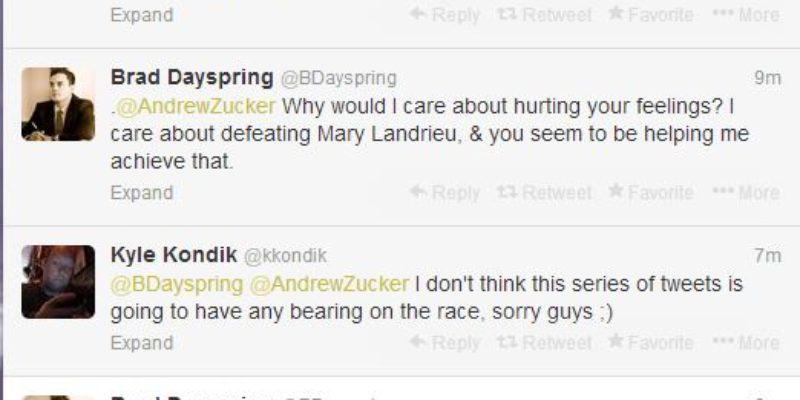 Those numbers are actually a little better for Maness than most folks would have thought, but what they really say is that Mary Landrieu is in a whole lot more trouble than anybody thought she’d be before the Obamacare debacle’s flowering.

If all she gets is 41 percent in the primary next year, she might as well save us all the time, money and trouble for the runoff.

Her “excellent” ratings went up four percentage points (from 12% to 16%) which mainly came from black Democrats and female Independents. Her “good” ratings dropped by 14 points (from 44% to 30%). Her negative job ratings went up ten points with most of that being an increase in “poor” ratings (up seven points).

Senator Mary Landrieu is definitely facing an uphill battle for reelection. She draws 41% of the vote in a three-way trial heat with Republican challengers Congressman Bill Cassidy and Rob Maness who collectively draw 44% (34% Cassidy and 10% Maness) of the vote; the remaining 15% are undecided or wouldn’t say.

If Senator Landrieu faced reelection in the next few months, her outlook for reelection would be highly unlikely. When voters were asked which was more important, keeping her in office due to her seniority or electing someone new, 56% wanted someone new and 37% percent wanted to keep her in office. Her accumulated seniority is unimportant to most voters and reminding voters she is a three-term incumbent senator will not improve her outlook for reelection.

Not only are the voter registration proportions trending against Democratic candidates, but there is also the misalignment of party loyalty. About half (48%) of Louisiana voters tend to agree with Republicans no matter how they are registered to vote. Only 36% tend to agree with Democrats. These percentages point out why Louisiana has no Democratic state office holders. Senator Landrieu faces a tidal wave of unfavorable demographic voting trends.

That 70 percent of undecideds who said Obamacare would probably make them vote against Landrieu is devastating. It means if the election were today and the 41-34-10 split were to remain, she could expect to pull no more than about five percent of the 15 percent still undecided.

That tops her out at 46 percent, and in a runoff with Cassidy she would be absolutely cooked.

Particularly when you consider that the runoff election would in all likelihood be the only line on the ballot in most of the state. Cassidy’s 6th District seat will probably go to a runoff, but in all likelihood given the current names being thrown around the participants in that runoff will be a couple of Republicans.

What that means is you can expect lower turnout in the runoff than in the primary. And lower turnout usually, if not always, results in a more conservative electorate.

So Landrieu starts out getting beat basically 54-46 by Cassidy and Maness, and somehow she then has to convince close to half of the 10-14 percent of the voters who chose Maness to vote for her when they’re voting for the long shot because they don’t think Cassidy’s conservative enough for them. Either that, or she has to so burn Cassidy down and so disgust Maness’ voters about the political process that they don’t even bother to turn out in the runoff.

Bear in mind that if Cassidy gets 6 of the 15 percent of the undecideds – or just more than half of that 70 percent who say they wouldn’t vote for Landrieu because of Obamacare – he’s at 40 percent on Election Day with Landrieu at 46.

It’s not hard to see him picking up the majority of Maness’ vote, particularly when the runoff electorate is going to be more skewed to Republicans than the primary was.

This poll, if it can be trusted, is terrible, terrible news for Landrieu.

A LITTLE EXTRA: Check out how the AP’s Melinda Deslatte wrote up the poll, though – and ask yourself whether Deslatte gets a check from Mary for her efforts…

A new poll shows support for U.S. Sen. Mary Landrieu in Louisiana has dropped amid the problem-plagued rollout of the Democrats’ health care overhaul.

According to the survey released Thursday by Southern Media and Opinion Research, approval of Landrieu’s job performance has deteriorated to 46 percent.

Fifty-four percent of those polled said they’d be less likely to vote for the Democratic senator’s re-election next year because of her vote for President Barack Obama’s health law.

Pollster Bernie Pinsonat says the election picture is gloomy for Landrieu, but could improve if problems lessen with the health law implementation.

The poll surveyed a random sample of 600 Louisiana voters who cast ballots in at least three elections over the last four years. It had a margin of error of 4 percentage points.

No mention that all she gets is 41 percent in the three-way race with Cassidy and Maness. No mention of that at all. Just the fact that her approval rating dropped to 46.

Oh, and we’ll leave you with this. We’ve explained who Andrew Zucker is; Brad Dayspring is the communications guy for the National Republican Senatorial Committee… 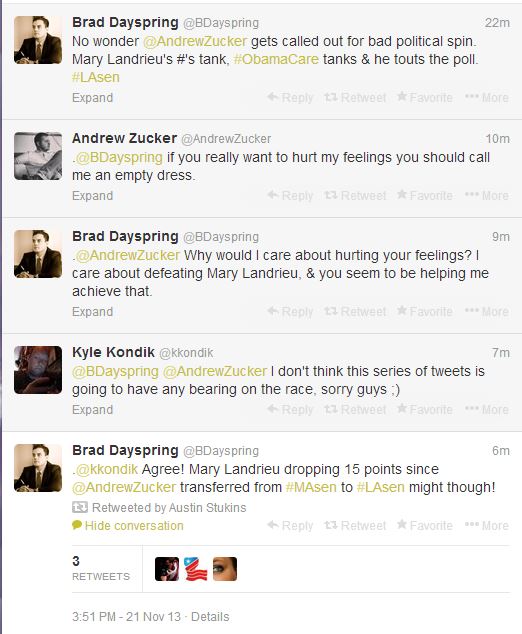 UPDATE: And here’s the state GOP on the poll…

Louisiana Republican Party Chairman Roger Villere issued the following statement today on the latest poll in the Louisiana senate race:
“There are no two ways about it:  After casting the deciding vote for ObamaCare – which is kicking nearly 100,000 Louisianans off their health insurance – and voting with President Obama 97 percent of the time, Mary Landrieu is on the ropes,” said LAGOP Chairman Roger Villere. “Just today, Mary Landrieu voted to rig the Senate so that President Obama can have a free pass to ram through even more liberal appointees and activist judges that would protect and enforce ObamaCare. It’s becoming more and more clear in Louisiana that Mary Landrieu is more concerned about President Obama’s priorities than those of the people she is supposed to represent.”
Quick Facts From Today’s Poll: