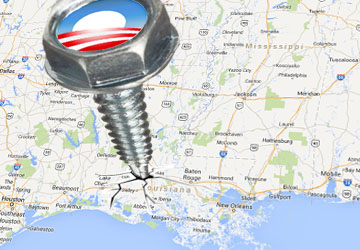 UPDATE: From talking to some folks from the House Natural Resources Committee staff, a clarification: Section 302 of the budget deal legislation only applies to ONSHORE federal mineral royalties, and not offshore.

That’s something which was very difficult to ascertain from reading the legislation (either that or it was very late last night), but it’s a major distinction.

That said, if you’re a Mike Lee or a Mike Enzi or a Lisa Murkowski, you’re going to have a fit about Section 302 – because onshore mineral royalties from federal lands in your state are going to constitute some big numbers. And a 2 percent cut of those royalties will come to a whole lot more than $500,000 a year.

Had Section 302 involved offshore royalties, it would have been a major, major problem. Last year the total royalty take from the western Gulf of Mexico offshore fields was something like $8.7 billion. Two percent of that is almost $175 million, distributed between Texas, Louisiana and Mississippi – to be losing that revenue would have been a very big deal indeed.

Thankfully we’re still set to get our scheduled 37.5 percent. One day we’ll manage to get that number up to the 50 percent it would have been but for the avarice and stupidity of Leander Perez and Earl Long.

ORIGINAL: Maybe I’m reading this thing wrong, and maybe somebody can straighten me out. But from what I can tell about this budget deal, there’s a piece in there where Uncle Sam absolutely puts the screws to Louisiana.

One of the items the advocates of the budget deal on the Republican side have been touting is that through it, some 1.5 million acres of federal waters will be opened for offshore oil and gas drilling. This is a major selling point for the budget deal that passed the House last week.

The emerging budget deal put together by Congressman Paul Ryan and Senator Patty Murray includes provisions that will open up vast new territories in the western Gulf of Mexico for oil and gas drilling. The bill, which will fund the government through the fall of 2015, approves the U.S.-Mexico Transboundary Hydrocarbons Agreement, originally signed between those two countries in 2012.

The agreement allows for the development of oil and gas reserves that cross national boundaries, and sets up a framework for their joint development. The deal would open up 1.5 million acres, an area that may hold 172 million barrels of oil and 304 billion cubic feet of natural gas, according to the Bureau of Ocean Energy Management (BOEM).

This is unquestionably a good thing.

If, of course, the Obama administration actually abides by the agreement. Experience tells us the Obama administration is extremely unreliable when it comes to fulfilling commitments to conduct leasing and permitting for offshore drilling; even after reinstituting offshore drilling permits following its unwise and illegal Obamoratorium in the Gulf it’s still running a much more cumbersome and inefficient process than it used to run.

And things are not improving in any substantial measure.

What this means is that the House GOP has done a deal with the Senate Democrats to open more areas to offshore drilling. There is no guarantee the Obama administration won’t go back on that deal after this budget is signed and sit on the leasing and permitting process for those 1.5 million acres and 172 million barrels of oil.

But here’s something in that budget deal which is a bit more concrete. Meet Section 302 of the budget bill (page 9 on the PDF at the link)…

Sec. 302. Amendment to the Mineral Leasing Act.
Since 2010, states receiving significant payments from mineral development on Federal lands also share in the costs of administering the Federal mineral leases from which the revenue is generated. The states pay their share of the administrative costs in the form of a 2 percent deduction of monies paid to the states by the federal government. This deduction is scheduled to expire at the end fiscal year 2014. Section 302 makes this deduction permanent.

Sen. Mike Lee saw that and freaked out about it where Utah’s royalty payments were concerned…

Under the Mineral Leasing Act, the federal government leases federal land for the development of energy, minerals and other materials, and shares the revenue with the states in which the leases are held.  The revenue is currently split evenly between the states and the federal government.  Section 302 of the budget deal would only decrease what the states receive, leaving the federal portion intact. That would mean a total reduction of $415 million for the states, with roughly $32 million coming from Utah.

“It is unfortunate that the budget targets the mineral leasing program,” said Sen. Lee, who sits on the Senate Energy and Natural Resources Committee. “Many of Utah’s rural communities depend on this funding and we shouldn’t be pulling the rug out from under them when there are so many other wasteful and ineffective programs in the federal government to reform.”

Lee’s reaction is a good indication that Section 302 applies not to royalty payments from new leases, but from the stuff which is currently producing revenue. The fact that the 2 percent “charge” in question is set to expire is an even better indication his reaction is the correct one.

And if Utah is out $32 million, you can bet your sweet bippy Louisiana’s going to be out a big chunk of change as well. This deal makes the state surrender revenue it would be otherwise getting, in return for the promise of more drilling by the same Obama administration which illegally shut down all drilling in the Gulf for several months because of one bad apple operator who didn’t follow best practices and destroyed their own platform in the process.

Forgive us if we don’t trust them to hold up their end of the deal. They’ll gladly screw Louisiana out of its royalty payments, though – and that you can take to the bank, because it’s in the deal.

Four Louisiana congressmen voted for the budget deal. We can virtually guarantee none of them had any idea they were voting for Section 302. We can guarantee that because they weren’t given time to review all the minutiae in this monstrosity – because it was rammed through the House without even the three days to read it Speaker John Boehner promised his members they’d have.

And the deal will pass in the Senate, because there are enough Republicans who don’t have the stomach for a bloody shutdown fight.

We just got hosed by the federal government, and so did every other energy-producing state.

But we’re supposed to be happy about the budget deal, apparently – because it could have been worse.

The House GOP leadership wonders why they’re having so much trouble pacifying their base. It’s crappy legislation like this – and every single bill they pass is just like this – which the conservative public is tired of.

Look, there was no organized campaign to get Capitol Hill Republicans to man the barricades and risk another shutdown. That’s already been done once this year, and though it was hardly the disaster the Beltway elite made it out to be for the Republicans there’s only so much you can ask of a bunch of politicians before you’re kidding yourself.

But don’t tell us this was a good deal. If our interpretation of Section 302 is correct, this was a bad deal for Louisiana and the four Congressmen who voted for it are going to feel like they just got the bait-and-switch from their own leadership.