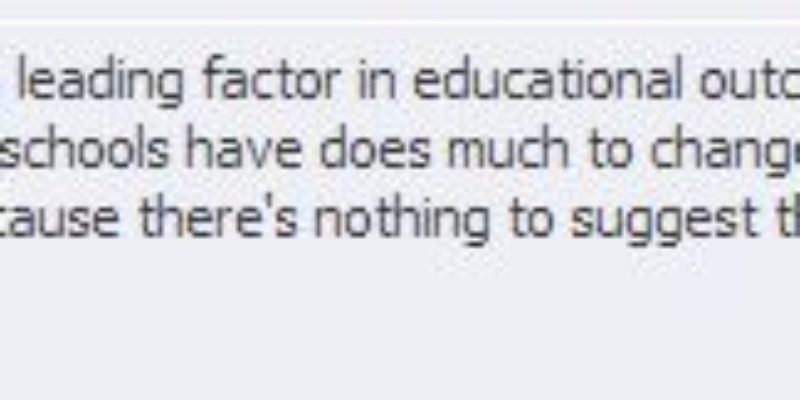 Apparently, the “forum” put on by “Leaders With Vision” – the “organization” run by left-wing activist and former League Of Women Voters of Baton Rouge president Jean Armstrong – about the St. George incorporation movement played out as most other events bearing Armstrong’s imprimatur.

The St. George organizers who had begged off and were advertised as having been summoned to the event were tried and convicted in absentia. We’re told it came off a little like this…

No, the guy sitting in judgement in the video was not Metro Councilman John Delgado. He’s nearly there, though, and we’ll get to that in a second.

And in the meantime, the remainder of the panel included Southern University poli sci professor Albert Samuels, LSU professor and volunteer EBR schools flack Belinda Davis, LSU economist Jim Richardson (whose “study” of the impact of St. George revealed that $53 million in tax revenues generated in what is to be St. George each year flows into the city of Baton Rouge) and Delgado’s colleague on the Metro Council Buddy Amoroso, who hasn’t gone public with a position on St. George.

Which meant Amoroso took a beating, seeing as he was the “proponent” of St. George.

Leading the charge, and offering up his best Cilian Murphy/Scarecrow-as-judge impersonation, though, was Delgado – whose antics in opposition of St. George are making him something of a comic figure in Baton Rouge politics. A few morsels from the Baton Rouge Advocate’s write-up of the show…

“It seems to be built on faith, trust and pixie dust,” Delgado said. “Just like Peter Pan, the St. George leaders need to grow up. And they need to show up.”

Delgado posed several questions, such as the location of their city hall, how their schools would be paid for, whether they would pay legacy costs to the city-parish, such as retirement, and whether they can promise voters that a new city would guarantee a new school system.

Delgado says tax money collected at major shopping centers in unincorporated areas rightfully belongs to the entire parish. “The income [mostly] is earned in the city,” he says. “They spend it where the malls are. That doesn’t mean that it’s somehow more St. George money than it is Baton Rouge money. It’s all EBR money, and it should be that way.”

St. George-shouldn’t-incorporate-because-it-doesn’t-have-a-City Hall is about as feeble an objection as one might imagine. An empty storefront or some leftover office space could be a City Hall until such time as one is constructed; that Delgado offered up such a dopey criticism merely shows how addicted to the trappings of political power the rookie city councilman is.

But in a room like that, where the only dissident in favor of St. George appears to have been Woody Jenkins, dumb statements and crazy talk like saying tax dollars generated in St. George, should it incorporate, wouldn’t belong to St. George but rather the city-parish government because people who might shop in St. George might also live and work in Baton Rouge…those inanities are met with nods of approval.

Flush with good feelings after yesterday’s triumph, Delgado took to Facebook to pontificate further. Except this time it didn’t go as well – sometime Hayride contributor Ryan Booth blew in to ruin the party… 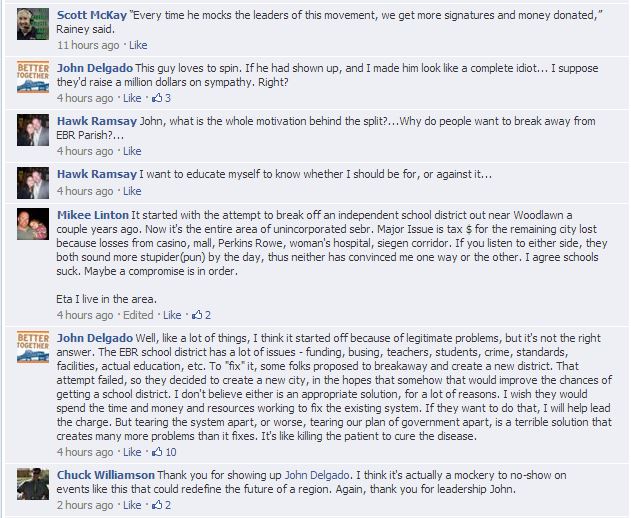 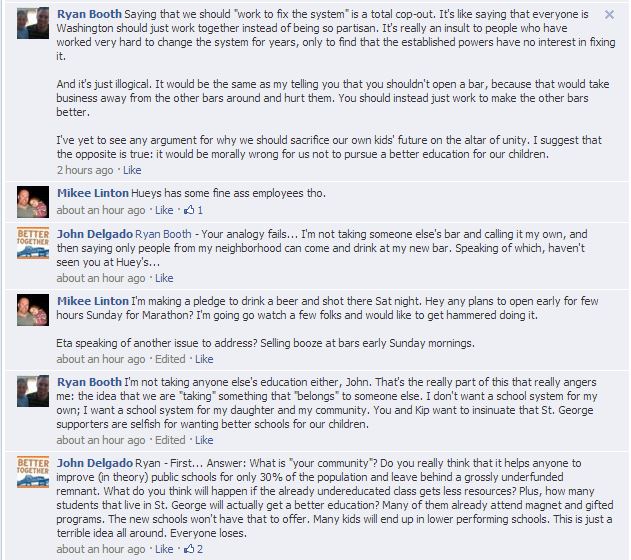 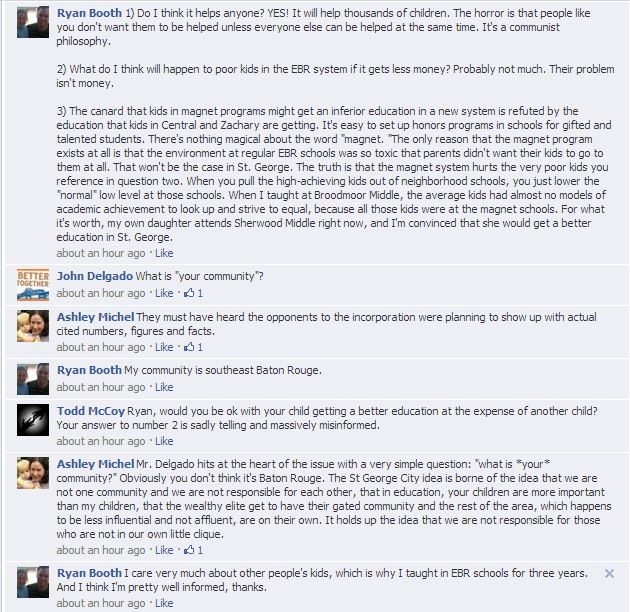 The thing to understand about all this is while Delgado might be earning some brownie points with the downtown crowd, and while he might be burnishing his credentials as the pet Republican politician for folks like Armstrong, the St. George issue isn’t really about what the downtown crowd thinks.

It’s about what people in St. George think. They’re the electorate which will decide that incorporation. Not the downtown people.

And the flip, disrespectful manner in which Delgado addresses those people, to go with the straw men and non sequiturs he offers as argumentation, only solidifies the possibility of that incorporation. What Delgado is doing is making himself into the personalization of the bad-guys opposing St. George to the St. George people. That his district contains a sliver of what would be St. George, meaning he’s trashing his own constituents every day, only makes that worse.

Lots of people have said that “St. George is just a bunch of neighborhoods; it’s not a city with a sense of community to it.” But Delgado’s likely to change that by unifying these people against him personally if he continues to serve as hatchet man.

And lots of political pros I’ve talked to over the past few months who have been watching Delgado’s tirades have marveled at the immaturity and political stupidity contained therein.

Said another: “He’s breaking every rule there is on not making yourself an unnecessarily controversial figure.”

Still another noted Delgado’s desire to run for mayor-president in 2016, surveyed the demographics of the parish and concluded it’s impossible for a white Republican who alienates most of South Baton Rouge to have any chance to win. “He won’t get the black vote, because  there will be black candidates in the race. So where’s his constituency?”

Perhaps the coup de grace was when veteran political consultant and proprietor of the Louisiana news aggregator LANewslink.com Pat Bergeron went on Delgado’s Facebook a few weeks ago and told him “I’ve been in politics for 30 years, and you are making a terrible mistake.”

Surely there are people with greater political skills than Delgado on the side of the St. George opposition, but those people have so far not acted successfully to rein him in – and they also haven’t presented any more sophisticated advocates for stopping the St. George movement.

Which gives rise to a theory of mine, one which I haven’t seen sufficient evidence to debunk. Namely, that the downtown crowd, or at least the more intelligent members of it, knew from the start that there was no way to stop the St. George incorporation – that it was inevitable and simply a matter of time before the petition was completed, and the election incorporating the city would be a foregone conclusion. And so all of the rhetoric and bombast from the mayor, people like John Fregonese, Jim Richardson, Belinda Davis or C. Denise Marcelle (Delgado excepted, as he appears to be a loose cannon attempting to ingratiate himself with people who may or may not see him as their Useful Idiot) about how St. George will destroy Baton Rouge … none of that is actually intended for the ears of the people living in unincorporated areas but rather for people inside the city limits of Baton Rouge.

The theory goes that since they know they can’t stop St. George and since they know Baton Rouge can’t compete with what will be a larger and richer version of Zachary and Central, what they’re going to need is a scapegoat to blame their problems on. That $50 million in functional subsidies people in St. George are paying to prop up the downtown Baton Rouge gravy train will go away with the new city’s incorporation, and that means lots of people are going to have to take haircuts on things like consulting contracts, per diems on do-nothing boards and commissions and so forth. And without being able to blame the troubles on someone external, there will be some political chickens coming home to roost for the Baton Rouge political class.

I don’t find much evidence debunking this theory, because virtually everything said by the opponents of St. George is an insult to the people who live there. Like Lionel Rainey, the spokesman for the St. George effort, noted in this morning’s Advocate piece about Jean Armstrong’s clown-show yesterday, every time Delgado mocks and disparages the people of St. George they collect more signatures on the petition and bring in more money in donations. Richardson’s $50 million allegation backfired in a major way, because it told the St. George people just how much of their tax dollars were basically being stolen. The countless accusations of racism only motivate people in the unincorporated areas to join the movement. And so on.

Armstrong’s anti-St. George rally, with its Crazy Train of non-sequiturs and false accusations, will only have a similar effect.

And interestingly enough, after our piece Wednesday about Armstrong’s track record of ambushing those she disagrees with at League of Women Voters events, we received an email from the president of Louisiana’s League of Women Voters stating plainly that Jean Armstrong no longer has anything to do with their organization, that the Baton Rouge chapter of LWV was disbanded a year ago and that they’re looking to reconstitute a new one which is free of the Jean Armstrong brand.

Which is interesting stuff. It appears Armstrong’s reaction to being excommunicated was to scare up a new organization – Leaders With Vision – with the same initials as her old one, and to go right on doing what she’s always done.

There’s a lot of holding to an unproductive course going on in Baton Rouge. No surprise the folks who do that tend to stick together.