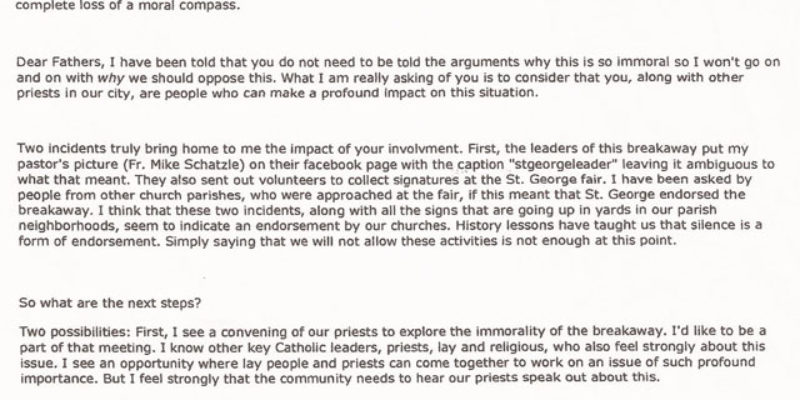 Here’s something interesting. From the December 27 issue of Catholic Commentator, an excerpt from an article by Father John Carville entitled “New Year’s Prayers”…

Finally, as we look to 2014 and beyond, it seems clear that a good education for all of our children will be as important an issue as food and shelter. I pray that all of our citizens, and especially those contemplating a break with the City of Baton Rouge, would consider Catholicism’s teaching on the importance of always seeking the common good of the whole population. It would seem opposed to the common good and to Jesus’ parable on treatment of the poor that the affluent Dives (the southern unincorporated area of East Baton Rouge Parish) abandon the beggar Lazarus (the poorest northern part of the parish) leaving it with even less funds for educating its children than it now has. “The Lord hears the cries of the poor.” As the body of Christ in Baton Rouge, may God give us the grace to hear them also.

Got that? It’s a sin to sign the St. George petition. To do so is to leave Lazarus at the gate – and to doom yourself to the fires of Hades while the beggar has a seat alongside Abraham in heaven.

You’re a sinner if you live in what will be St. George and want your tax dollars spent on school kids in your own neighborhood rather than across town, or if you don’t believe your tax dollars are being properly spent on setting teachers on fire, refereeing and covering up schoolyard brawls or grade-fixing and academic fraud on behalf of relatives of school board members.

It’s a sin to do that. You must invite Lazarus to your table, even though he’s been stealing your mail for years.

But there is a paper trail behind Father Carville’s missive. We were forwarded an e-mail dated Nov. 8, 2013 from a Father Frank Uter, the pastor of Immaculate Conception Catholic Church in Denham Springs, which was itself a forward of another e-mail. We’ll get to that message in a moment, but here is was Fr. Uter had to say…

Dear Priests, Deacons and Administrators of the South Central Deanery,

I received the e-mail below from Dianne Hanley and she asked that I forward it on to the priests and deacons of the South Central Deanery. As you know, Fr. Michael Schatzle will be coming to the Deanery meeting in January and asked “The City of St. George” be included among the items to be discussed. You may wish to consider the possibility of it being also an action item, if a position needs to be taken. Fr. Mike is in the midst of a big building campaign, and if we can assist him in terms of the City of St. George and take some of the pressure off, it might be good. This is just personal reflection, nothing he or anyone else asked me to say.

We’ll get to Dianne Hanley anon, but Fr. Michael Schatzle is the pastor of St. George Catholic Church, which will be smack-dab in the middle of a new city sharing the namesake of that fair institution. One might surmise from Fr. Uter’s e-mail that Schatzle would be thought to oppose the formation of the city and that open opposition on his part to the incorporation would put him at odds with many if not most of his parishioners.

And this could be an issue in particular given that Schatzle is on the Executive Committee of the Alinskyite, Soros-funded Together Baton Rouge, the primary achievement of which was the establishment of the $18 million-per-annum graft engine which is the CATS tax.

Now to Hanley, whose connection to Together Baton Rouge is even closer than Schatzle’s is. A look at her LinkedIn page reveals an interesting background – particularly, this…

Together Baton Rouge, through relationship-building, helps congregations and organizations develop a deeply-rooted justice strategy – not one that lurches from issue to issue, but one that builds a base of leaders, develops an analysis of the pressures affecting families in an institution and crafts a viable response to those pressures, working together with other congregations and organizations.

Let’s not forget that Together Baton Rouge’s role of late in public transportation, outside of getting the CATS tax passed, was to interview candidates for the CATS board. That worked out so well last year that it recommended Bill Johnson, a felon recently of EBR Parish Prison who had been caught fraudulently soliciting funds purportedly headed for a drug education program, for that board. Had it not been for the intervention of a group of conservative activists at the last minute Johnson  would have made his way onto that board to replace Montrell McCalebb, who was bounced off the board for having CATS pay his DirecTV bill and now has significant legal problems of his own.

Together Baton Rouge posted YouTube videos of its interviews with candidates for the board. Shockingly enough, its interview with Johnson has been yanked from its YouTube page.

So that’s Dianne Hanley’s contribution to integrity and virtue in the public transportation field, and protection of taxpayer dollars from graft and waste.

Here’s a little something extra as background on Miz Hanley…

Hanley has also worked with Catholic Charities; specifically she was the Associate Director of Parish Social Ministry for the Diocese of Baton Rouge. We’ll get to that shortly.

First, the e-mail Fr. Uter spread around to the South Central Deanery that she wrote… 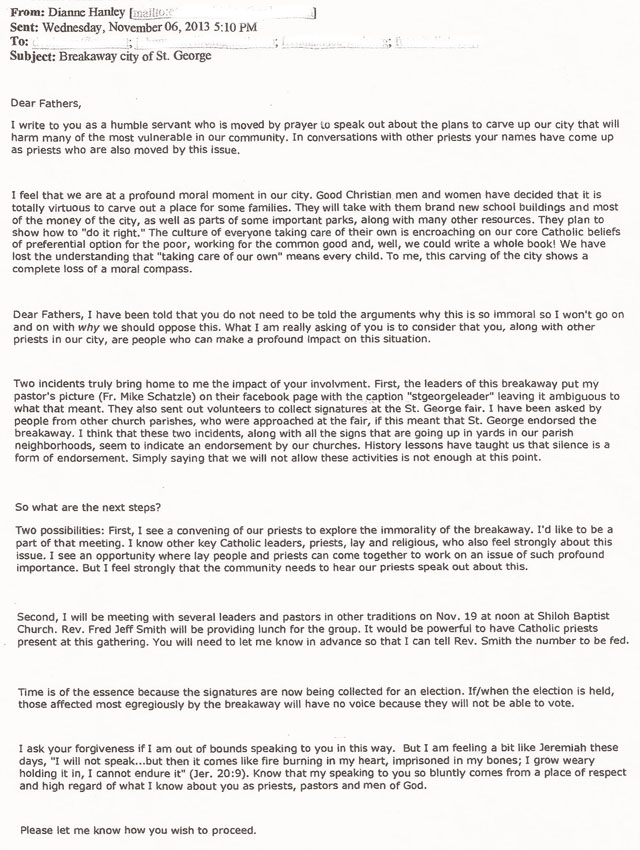 So a left-wing Together Baton Rouge activist working within the diocese is doing some community organizing among the priests and deacons, leading to public condemnation of St. George from a prominent clergyman in the diocese’s weekly newspaper.

But there could be more to this story.

Who’s the primary opponent of St. George? Most people in the know will tell you it’s the Baton Rouge Area Foundation, the big-money organization made up of a lot of the city’s big-money players. BRAF has a whole lot of cash, and a whole lot of influence.

And then there was the $15 million BRAF gave to Catholic Charities for the Archdiocese of New Orleans as part of its role in disbursing BP oil spill recovery dollars, which was the largest grant the organization had ever received.

In other words, with that kind of money going out the door BRAF can get themselves a whole lot of allies, very quickly. So it should be no surprise if when BRAF doesn’t like something, neither do a whole lot of folks within the Catholic Church.

Sure, there are other reasons why the Catholics might not be keen on St. George. Those churches run schools, and while the Church is a big believer in education they can count. When there’s a great public school system, there’s a little less demand for Catholic schools that carry a tuition cost to them. The incorporations of Zachary and Central haven’t been particularly kind to Redemptorist High in the northern part of the city, for example. And they’d rather not see schools like the one St. George Church runs, or St. Michael in the southeastern part of the parish which will also be in St. George, end up on life support like Redemptorist is.

But none of that is mentioned in the communications of Frs. Carville and Uter or Dianne Hanley’s e-mail – the latter two, it ought to be noted, are internal rather than public. We received them because one of the recipients of Ft. Uter’s communique, which had a large distribution list, is supportive of St. George, was outraged at the machinations it contained and thus leaked the material to us through a third party. If the writers of those messages really saw their opposition to the new city as having a bad effect on school enrollment you can imagine they’d say so.

They didn’t, as you can see. The motivation would have to be elsewhere.

So don’t be surprised if, as the St. George debate continues, you begin to see Catholic clergy openly oppose the new city. After all, they have powerful patrons to please – and Together Baton Rouge activists rallying them to the cause.