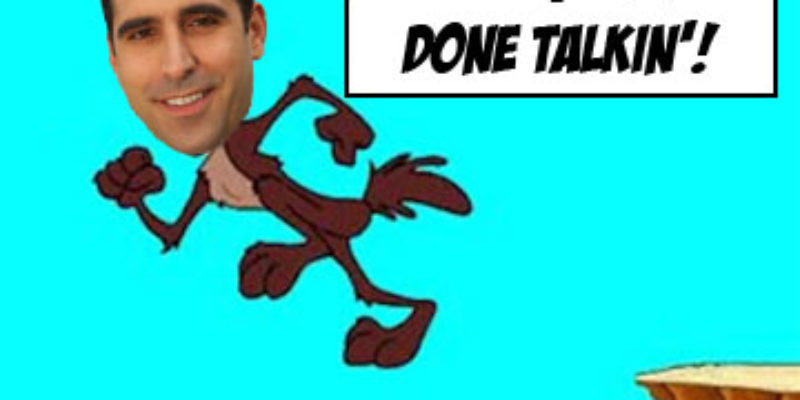 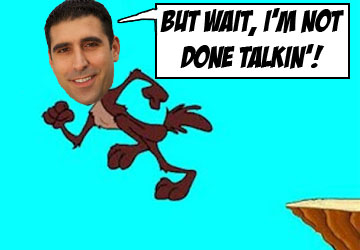 ANOTHER UPDATE: Yet another of Delgado’s colleagues, Buddy Amoroso, wasn’t happy with what he said…

“My son is in the Navy and my wife is a Blue Star Mother, it’s a subject close to my heart,” Amoroso said. “There are young men who are very much wounded today, coming back from Afghanistan and for John Delgado to compare supporters of St. George to the enemy of the United States, and the people directly responsible for 9-11, well I’m pretty emotional about it.”

UPDATE: How bad is this? Pretty bad. When Delgado’s political mentor Kip Holden calls him out, you know it’s bad…

“I regret that the St. George issue has resulted in unnecessary name calling and not a discussion of the issues. As you know, I have voiced my opinion against the separation. I encourage all parties to engage in civil discourse. We are all Americans and we should respect diverse views without name calling.”

Councilman John Delgado has forgotten the first rule of holes: When you find yourself in one, stop digging. The councilman, who represents my district, crossed the line today by slandering St. George organizers and supporters, calling them the “Baton Rouge Taliban.” No matter how heartfelt his position on St. George incorporation, irresponsible name-calling is not the way grown-ups handle disputes. He should be embarrassed but has thus far shown zero remorse and only throws more oil on the fire with each Facebook post and each response to reporters. If you are unfamiliar with this latest incident, The Advocate reported today on a Facebook exchange between councilmen Ryan Heck and Delgado. Heck credited the St. George effort as providing impetus to finally address some pressing issues regarding public education in the parish. Then Delgado posted a reference to Al Qaeda and said, “I don’t thank people that try to destroy our community. I condemn them for the terrorists that they are.” Lionel Rainey, spokesman for St. George, demanded Delgado apologize via a quote to an Advocatereporter. Instead, Delgado refused and inflated the rhetoric by calling the organizers “the Baton Rouge Taliban.” However you feel about the St. George plan and our public schools, these are American citizens and our neighbors exercising their legal rights in a democratic society. Supporters of a City of St. George are following procedure. And respecting the rule of law. They are doing what they and others regard as patriotic duty. All legal. All American. As for Delgado, he should take a deep breath. And then use that air to sincerely apologize, not just to St. George but to all of us who respect democracy.

ORIGINAL: Nominations for the title of Worst Politician in Louisiana are now closed. We have a winner, and it is uncontested.

Organizers behind the city of St. George are demanding an apology from Baton Rouge Metro Councilman John Delgado who compared the group to al Qaeda and called them terrorists in a Facebook thread.

Reached for comment by phone, Delgado — one of the most outspoken opponents of the creation of the new city — refused to apologize and called the group the “Baton Rouge Taliban.”

This after equating St. George with Al Qaeda earlier in the day, which prompted us to ask whether he’s the worst politician in the state.

Rainey said Delgado owed an apology to the St. George incorporation committee and its volunteers, as well as to anyone who knew someone who died in the Sept. 11 attack, and to anyone serving in the U.S. military.

But Delgado said in a phone call that St. George organizers have “threatened the city with economic collapse for more than six months.”

“They’re instilling fear for the purpose of getting what they want, that’s a terrorist,” Delgado said. “They’re the Baton Rouge Taliban.”

Asked about the fairness of comparing the St. George incorporators to groups who have killed Americans, Delgado responded that the St. George effort threatens Baton Rouge lives.

“I believe that we have shown that police protection and fire protection will be cut by 25 percent (if St. George is created),” Delgado said. “You don’t think that affects lives? I suggest to you that it does. They’re putting people’s lives in danger with their foolish pride.”

We’re trying to remember a dumber move by a politician in this state. We’re struggling with it.

All we can come up with is from out-of-state. Alvin Holmes, that ridiculous racist in Alabama, would rival this. Todd Akin, obviously.

But when you call a bunch of people you disagree with Al-Qaeda, and when you get called on it you double down and call them the Taliban and then accuse them of killing people by incorporating a city, you might actually have passed up Alvin Holmes and Todd Akin.

And that would make you…what? The worst politician in America?

UPDATE: Oh – and then there was this…

“For the last six months, Norman Browning, Dustin Yates and Lionel Rainey have held the parish of East Baton Rouge under threat of economic collapse,” Delgado told NOLA.com | The Times-Picayune. “They are terrorists. They’re trying to get their way and the only thing they have is the threat of destroying this parish. I’m not apologizing for my comment. They need to apologize for what they’ve done to the people of this parish.”

Interested in more news from Louisiana? We've got you covered! See More Louisiana News
Previous Article Low Popahirum, Louisiana Edition (4-2-14)
Next Article Common Core Will Not Be Repealed Across State