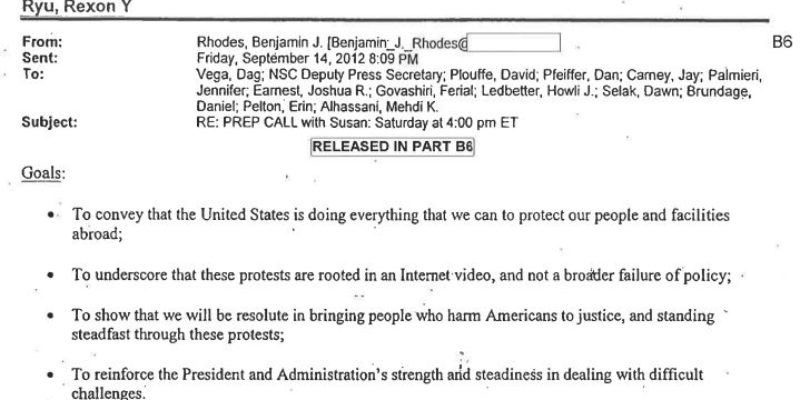 …and at this point all hell should break loose.

The smoking gun is this… 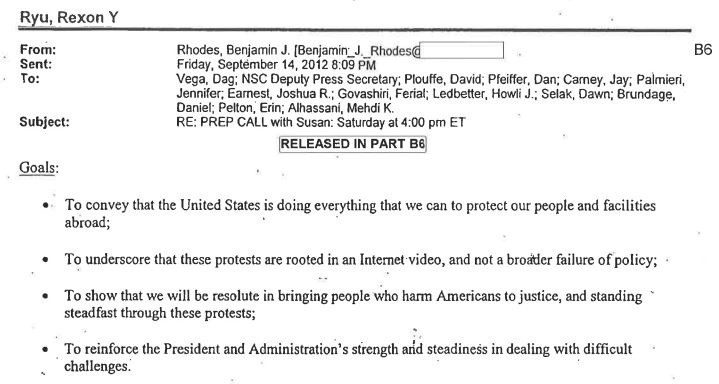 This is an e-mail from Ben Rhodes, the White House speechwriter and general political fixer, to a gaggle of high-ranking folks who were engaged in preparing Susan Rice for her disastrous appearance on the Sunday shows after Al Qaeda spent September 11, 2011 in Benghazi mounting a military-scale assault on a pair of U.S. diplomatic/intelligence installations there and killing Chris Stevens, our ambassador to Libya, and three members of our staff.

And as you can see, Rhodes is conveying in Point #2 that the White House wants Rice to push the stupid YouTube video as the cause of that attack.

For better than two years and going on three, Congress and the American people have been asking for the origin of the Benghazi talking points with no success. Everybody has known, or at least suspected, that it was the White House and/or the Obama re-election campaign (which were one and the same) who gave us the Rice appearance on the Sunday shows to push that video.

Now we have proof, thanks to a FOIA request by Judicial Watch which succeeded in turning loose 41 documents related to the Benghazi affair.

Let’s understand what it is we’re talking about here.

We had a mission of some kind in Benghazi, which was in place long after every other Western country had pulled out of that jihadist-infested sinkhole after repeated attacks on Westerners, and we still don’t know what that mission was which required the frequent presence of our ambassador in an installation with grossly inadequate security, plus a CIA “annex” populated by a few dozen operators whose activities there are still a complete mystery. We have reports that the administration was running guns from the jihadists in Benghazi to jihadists in Syria, and there are also reports saying CIA hit teams were working out of Benghazi to assassinate jihadist leaders across North Africa. But we have no real idea whether any of those reports are true; no one will tell us. All we know is whatever we were doing was very poorly done.

Our Benghazi mission was hit on the 10th anniversary of the 9/11 attacks on New York and Washington by an Al Qaeda military-grade assault force, which stormed the diplomatic installation there and killed our ambassador and one of his technical staff. We’re not sure about the full circumstances of Chris Stevens’ death – there are disturbing reports that he was sexually abused and tortured before he died, but there is no confirmation of that. And after the diplomatic facility was hit, the assault force turned its attention to the CIA “annex” and bombarded it with mortar fire accurate enough to drop rounds on two CIA operators who had taken firing positions on the roof, killing them.

And despite these things, we were told by the Obama administration, then in the midst of a nip-and-tuck re-election campaign, that there was no evidence of a military-grade assault – this was a protest over an internet video insulting the Prophet Muhammad for which the U.S. government had moved to punish by having the man responsible for it arrested on some trumped-up parole violation. And immediately after the Benghazi attack Obama made his way to the UN where he issued this famous statement… This while Obama and the rest of the administration knew they had just been hit by Al Qaeda, an organization the president had boasted was on the ropes and functionally inoperable throughout the campaign.

This has never happened before to our knowledge. It is the single biggest foreign policy scandal in American history, and we now have proof it came straight from the Obama White House.

Read that e-mail again and you’ll see that among the recipients were Jay Carney, Dan Pfeiffer and David Plouffe. There can be no question how high this went.

That this is an impeachable offense goes without saying. This makes Watergate look like a jaywalking episode. Watergate was a stupid break-in, the modern equivalent of which would have been the Nixon administration hiring computer geeks to hack into the Democrat National Committee’s servers.

Nobody died in Watergate.

Four people died in Benghazi, and almost three years later no one – no one – has yet been held to account.

We can’t express how big a deal this is. This is a pivotal moment in American history. If the Obama administration gets away with this and no one is punished, the history books will point to this episode and call it the point at which American decline was sealed. A country in which the leaders sell out the lives of their diplomats and soldiers for ill-conceived covert agendas and then lie to the American people in order not to have to avenge our dead while covering up the failure and thus deceive the electorate is a country ripe for the picking.

Charles Krauthammer said that decline is a choice. We unwittingly chose decline in 2008, and were duped into choosing it again in 2012. An informed choice is available now. What will we do?

Interested in more national news? We've got you covered! See More National News
Previous Article SARGE: A Man For No Seasons
Next Article PERRY: Fake It ‘Til You Make It!