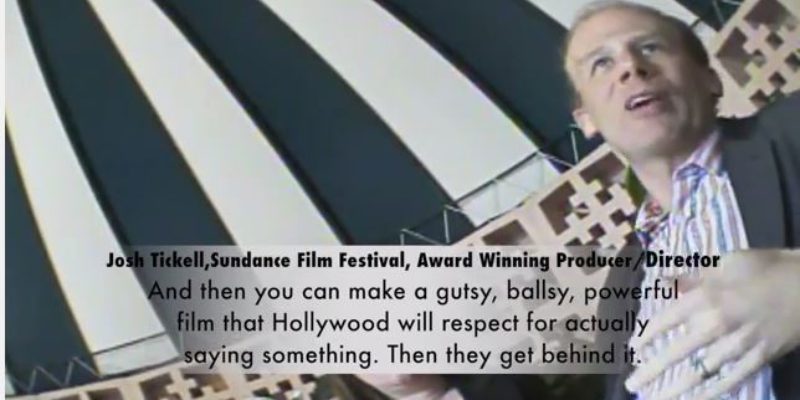 This thing is about 20 minutes long, and it’s the first in what is apparently a series of videos. But it’s well worth your time, because it’s absolutely beautiful.

What’s behind this sting is a question lots of people have wondered about for a while; namely, is the environmentalist movement in the United States really a front for Middle East oil interests seeking to hamstring energy production here and thus prop up their influence and economic power on the world stage?

After all, it could be argued that nobody benefits more from the kind of Luddite environmentalism of an Ed Begley, Jr. than those Middle East oil sheikhs. And if America ever became energy independent – or even a net exporter of oil and gas, which is now being predicted within the next 10 years – it would be a disaster of major proportion for the Arab world.

And we already know, as O’Keefe’s film makes considerable note, that the Matt Damon anti-fracking vehicle Promised Land was funded by oil sheikhs from Abu Dhabi. So there is precedent for the idea that the Arabs are using Hollywood as a shill in an attempt to interrupt our energy security efforts.

The O’Keefe video shows just how (1) idiotic, (2) easily duped and (3) happily treasonous some of the Hollywood folks he found are. Begley, Muriel Hemingway and Josh and Rebecca Trickell (who have made a number of environmental “message” films like FUEL and The Big Fix) are specifically told what’s at play in their meetings, including being presented with a “Mohammed” from the Middle East who makes no bones about what he wants to do and why. Nobody objects to the idea that a Middle Eastern oil sheikh would fund an anti-fracking film for the specific purpose of stopping Americans from drilling for our own oil and in fact Tickell even makes a statement to the effect he’s done something like this before.

And then there’s the piece at the end, when Josh Fox becomes involved. We’ll see where that goes in the next installment.

Who’s Josh Fox? Why, he’s the producer of Gasland, the highly controversial anti-fracking documentary which has been demonstrated as nothing but a pack of lies.

If O’Keefe ends up drawing out evidence that Fox made that movie with help from foreign interests hostile to domestic energy production, this could get fun.