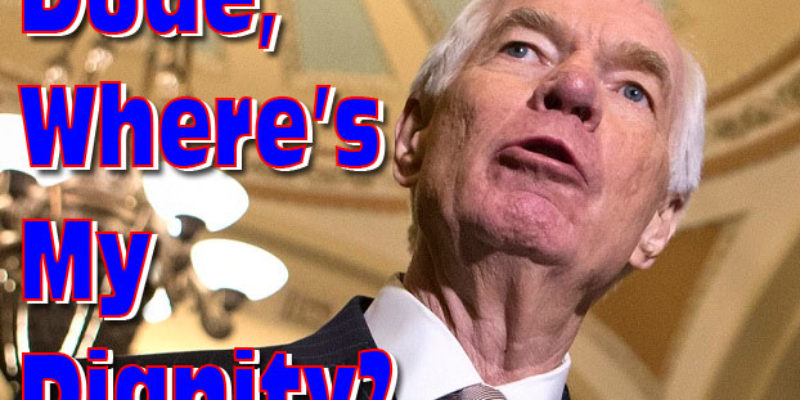 In case you hadn’t been made aware, over in Mississippi the re-election strategy of six-term RINO senator Thad Cochran, who is in the fight of his political life against state senator and Tea Party-affiliated insurgent Chris McDaniel, is to “expand the electorate.”

In Mississippi that means putting “street money” out into the black community in an attempt to get black Democrats to vote for Cochran in the Republican primary runoff. Cochran is now running on making promises of free stuff to poor people, and his Super PAC has now gone out and hired some local “fixers” in African-American precincts to do get-out-the-vote work…

A Democratic political operative says he is working with Mississippi Conservatives PAC to drum up votes for U.S. Sen. Thad Cochran.

James “Scooby Doo” Warren said he has put together a get-out-the-vote (GOTV) plan and is “putting it in place across the whole state.” Warren said he is not working with the Cochran campaign itself but for the PAC and Bishop Ronnie Crudup Sr.

Crudup is the pastor at New Horizon Church, which shares an address and chief financial officer with a newly formed super PAC that ran print advertising in the primary supporting Cochran.

When asked if he was getting any blow back for working in a Republican primary, Warren said he “got all that taken care of on the front end.”

“I called D.C. and told them what was going on with the tea party,” Warren said. “But I can’t do anything after the 24th because I’m a Democrat … Whoever wins will have to deal with me in November.”

That screenshot was tweeted out by a Republican state senator, Tony Smith, after he’d seen it on Mississippi Democrat Party Chairman Ronnie Cole’s Facebook.

Cole is blowing the whistle on the Cochran camp’s street-money program for a couple of reasons. The most important one seems to be principle…

In a phone interview, Cole confirmed he made the allegations and that he thinks there should be an investigation. “I can’t prove any of it yet,” Cole said. “This is just what I had heard. It think it warrants investigating, because I don’t know all of the details on it I just got word that James [‘Scooby Doo’ Warren] was bragging that he got money.”

“The reason I sent that text is because I wanted the McDaniel people to know that there was an effort out here ongoing to mobilize Democratic voters to vote for Cochran,” Cole added. “That’s simply because I don’t like the idea of Democrats voting in the Republican primary or Republicans voting in the Democratic primary. I believe members of each party should vote in their own primaries.”

The other is that he wants to break one off in Pete Perry.

Who’s Pete Perry? This is who…

This has raised questions about a conflict of interest from supporters of challenger Chris McDaniel. And questions about Perry’s involvement in an incident where McDaniel supporters were found locked in the Hinds Courthouse in the wee hours of the morning after election night.

“Does this seem fair to you?” McDaniel supporter and tea party leader Roy Nicholson wrote in a post on McDaniel’s campaign Facebook page. “… This is the same Pete Perry who has the gall to be suspicious of others?”

Hinds is the country Jackson is in.

In an interview Monday, Perry said he hopes that money routed through him won’t end up used to pay for votes.

When asked if he thinks there’s payments for votes happening in this election, Perry said that “I certainly hope not” adding that while he’s “been against that all my life since the 60s” he has “seen it done and I’m totally against it.”

“It’s not going on now that I know of,” Perry said. “And I certainly hope it’s not going on on either side—on either side. Everybody will come out against it too—the governor, lieutenant governor, me, Joe down the street from me will probably come out against it. I hope it’s not happening and I don’t know if it’s happening on the Cochran side and I hope the McDaniel side isn’t doing it either.”

Really? He hopes not?

Cochran is reduced to barking inanities. Amid his campaign alleging that if McDaniel were to get elected it would mean an increase in taxes (doesn’t that always happen when Tea Party folks win?), here was his response to the street-money allegations…

“I don’t know anything about that. I haven’t heard that. I don’t know who you are talking about,” Cochran said.

Cochran should have done the right thing when McDaniel beat him in the first round, and the price he’s paying for not bowing out is his dignity. Next week he’s going to have a rough Election Night.

Two polls on the race have McDaniel beating him by eight and 12 points, respectively, though a Democrat poll has him leading McDaniel 48-47.

There isn’t much reason to believe the Democrat poll. The runoff is going to get really, really ugly now that the word is out Cochran’s people are throwing out street money in the black community in an effort to “expand the electorate.”

For two reasons, that strategy is going to bomb – and badly – next Tuesday.

First, Republicans who think that they can go out and buy the black vote on Election Day with $20 bills without paving the way for it in advance – and that is Thad Cochran to a T since he’s never given a second look to the black vote in any of his six terms in office in Mississippi – always come up disappointed. They’re disappointed because the political fixers they hire have zero compunction about taking their money and stabbing them right in the back.

We see that in Louisiana all the time. Vending machine magnate and electoral dabbler John Georges, who used to be a Republican, attempted to buy the black vote while running for governor in 2007 and New Orleans mayor in 2010 – and his results were miserable. Georges spent some $12 million on the 2007 race, a large chunk of it with the black community, and got all of 186,000 votes. Even in Orleans Parish, where he was from and where he was counting on a big turnout in order to make the runoff, all he got was 36 percent. Georges then doubled down three years later, running against Mitch Landrieu, but despite spending $3 million on the race he landed just 8,000 votes. And when Republican Plaquemines Parish president Billy Nungesser ran for Lt. Governor in 2011, a get-out-the-vote/street-money campaign strategy in New Orleans worked poorly for him as well.

It’s not impossible for Republicans to get black votes. But trying to buy that vote on Election Day without having any actual relationships or real outreach just means you’re throwing money down a hole.

“Scooby-Doo” admitted as much when he said “Whoever wins will have to deal with me in November.” This guy isn’t going to do any real work to get the vote out for Cochran; he’s just going to take his money and say he will.

And second, how do you think it plays with conservative white Republicans in Mississippi that the guy who’s supposed to have been representing them all this time all of a sudden thinks it’s cool to dilute their votes in a GOP primary by chasing people who want precisely the opposite in terms of policy?

That’s a pretty significant betrayal, and it’s a fairly clear signal by Cochran and his handlers to the Republican electorate in Mississippi that he doesn’t give a damn about the principles by which they vote.

To have to send that signal means Cochran no longer has any justifiable foundation for his candidacy. It makes him unquestionably part of the problem – by his own admission.

That’s disgraceful, and it’s pathetic, and it’s a shame. Cochran could have prevented it by bowing out and endorsing McDaniel, but he didn’t. The people responsible for making Mississippi the most corrupt state in the union talked him out of it.