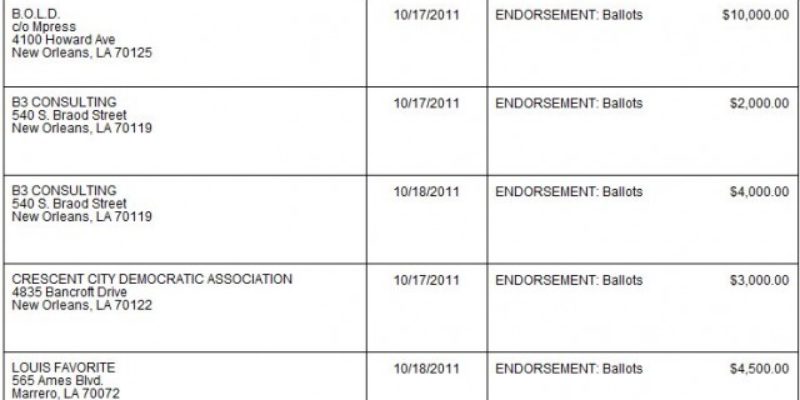 The Baton Rouge Advocate has a piece this morning about fundraising and campaign spending in the Lt. Governor’s race, and offers this nugget…

Campaign finance reports also show that Nungesser has now loaned his campaign $1.3 million — with the addition of $300,000 in the days leading up to the election.

In recent days, Nungesser has also paid out $79,000 to Democratic and black groups. Most are located in the New Orleans area. Payments ranged from $1,500 to $15,000 for “endorsement ballots” that are handed out to voters.

“You pay for your pro-rata share to be on the ballot,” Nungesser said Thursday.

In fact, the latest campaign disclosures show that Nungesser is throwing money at lots of the usual suspects when it comes to get-out-the-vote efforts in the black community… 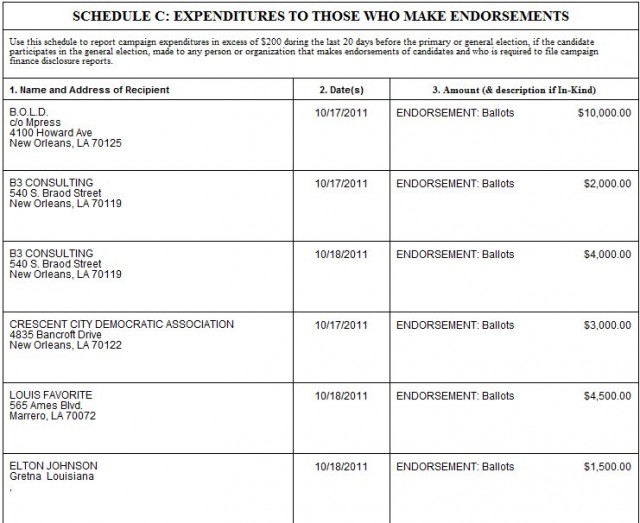 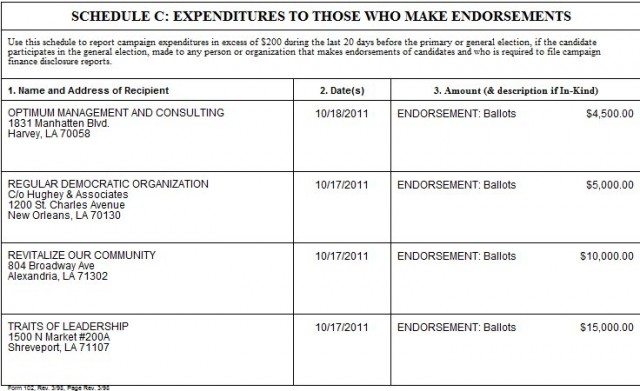 BOLD is one of the infamous alphabet-soup lefty organizations in New Orleans which backed Mary Landrieu, the Morials and Dollar Bill Jefferson over the years. Louisiana Independent Federation of Electors, or LIFE, is another. And B3 Consulting is a Democrat firm run by Shelly Fleming Boutte, the wife of political consultant, bail bondsman and Cedric Richmond booster Blair Boutte – who has a rather colorful history of his own. That makes for something of an all-star trio of left-wing Democrat machinists in the Crescent City.

“Did you know Jay Dardenne removed over 100,000 people from the voting rolls? Those were OUR people.”

“We worked too hard to have our voting rights taken away.”

“Did you know he cancelled the largest held African American contract with the state?”

“Nungesser treats our president with respect.”

It doesn’t exactly sound like running to the right of Dardenne, which has been Nungesser’s positioning for most of the campaign. On the other hand, with two Republicans running it seems like whoever can pick up the majority of the black vote in New Orleans might gain an edge in the race.

Of course, the accusation that Dardenne removed 100,000 black people from the voting rolls stems from his action while Secretary of State to scrub the state’s voter rolls of people who had moved away and phantom voters, particularly in Orleans Parish, after Katrina. That action was considered a death blow of sorts to the Louisiana Democrat Party, which has struggled badly to win races ever since. Dardenne also thwarted a 2008 effort by the Democratic Senatorial Campaign Committee to stuff the rolls with 70,000 largely fraudulent registrations mostly in Caddo and Orleans Parishes.

Whether Nungesser’s overture to the traditional Democrat base is smart politics or desperation is hard to say until the election returns come in. But it definitely does dilute his case against Dardenne being too far left for Louisiana.