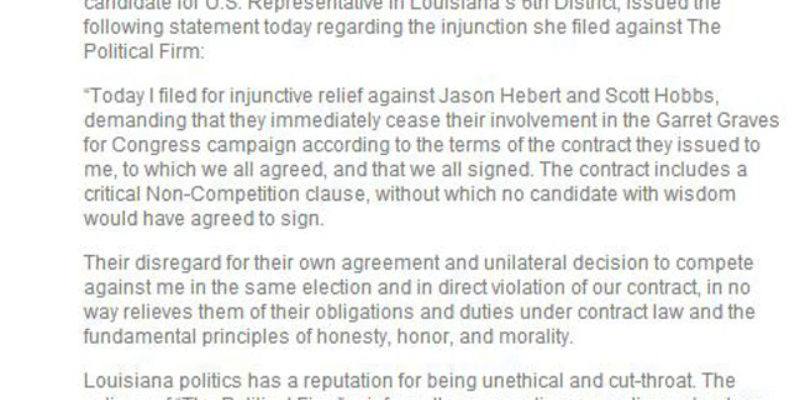 UPDATE: So today, I get a call from someone named Joshua Melder, who works as an attorney in Cassie Felder’s law firm.

Melder proceeds to tell me that he’s about to file for a Temporary Restraining Order against this site in an effort, I assume, to stop us from writing about his boss’ congressional campaign.

I shut him down and told him I don’t talk to lawyers who say they’re going to sue me. I told him he could e-mail me if he wants; otherwise he could do something anatomically impossible.

So this shows up in my inbox…

Also, at the end of our conversation, you stated I could speak to your lawyer. Please confirm whether you have engaged counsel. If so, please provide their name and contact information so that I may conduct further conversations with him or her.

At this point I brought in Scott Sternberg, Esquire, who’s the Hayride’s attorney and who teaches First Amendment law at Loyola. Sternberg thinks this stuff is more fun than a pillowcase full of kittens, and he proceeds to call Melder and give him some free legal education. To wit…

Basically I explained to him about what’s called the prior restraint doctrine in first amendment law. Near v Minnesota and New York Times vs. United States (the pentagon papers case) say that your remedy is after the content is published, not before. No prior restraint on publication has ever been upheld by a federal appeals court. It’s a bedrock principle of first amendment law. Suggested he look it up and call me back.

Sternberg says he also told Melder that thanks to the state’s anti-SLAPP law if Felder does sue us we’re going to get paid big-time by her for attorney’s fees, and at that point he and I considered the question of whether we could wrangle event registration for Mardi Gras balls or $329 tabs at barbeque restaurants as part of that. “Case preparation,” we could call it.

The long and short of this is that Felder says she never actually went to Panama City Beach or flew to Phoenix on her campaign’s dime – what she spent that $3700 on in the 2nd quarter was airfare and accomodations in Washington, but she booked them through a booking site based in Panama City Beach and US Airways’ site which is based in Phoenix. So that’s the big bone of contention.

Yeah, that’s right. Cassie Felder. She’s the one who submits the form.

Here are the entries in question…

If you’re a credible congressional candidate, you don’t just put “travel” down in the detail line. You put “Travel to Washington, DC for x-event,” so anybody who looks wouldn’t get the impression you’re taking vacations in Phoenix and Panama City Beach on your donors’ dime.

After all, vacations in Washington, DC in which you accomplish virtually, or absolutely, nothing in furtherance of your electoral prospects are far more palatable.

And third, Washington isn’t exactly in the district, is it? Not a lot of LA-06 voters up there. There is political money, to be sure, but here’s the problem: Felder didn’t get much.

Spending $4500 to raise $2500 still looks an awful lot like a hobby disguised as a campaign.

We can’t really speak to what threatening to sue political bloggers who point out how weird your campaign is looks like, because frankly we’ve never seen this kind of thing before.

Hobbs suggested this, and we’re with him…

ORIGINAL: If you didn’t read our story last week about 6th District congressional candidate Cassie Felder and her bizarre lawsuit against Jason Hebert and Scott Hobbs of The Political Firm for their having quit working on her campaign and signing on to work for Garret Graves’ team, you might want to give it a look for some context here.

The short story about this is that Hebert and Hobbs were Felder’s campaign consultants, but after a few months in the early going when she was spending as much money as she was raising – and a lot of what she was spending was on fun stuff like Mardi Gras balls and trips to fancy places – and doing very little to make herself a viable candidate, they threw their hands up and essentially fired her as a client. Two months later, Hebert and Hobbs joined up with Graves, and after the 2nd Quarter FEC disclosures came out and Graves was in 1st place as to the size of his campaign war chest and Felder was in 8th place (partly because she kept spending campaign money on travel and food), out came this lawsuit.

There are developments in this freakshow today. First, there was this… 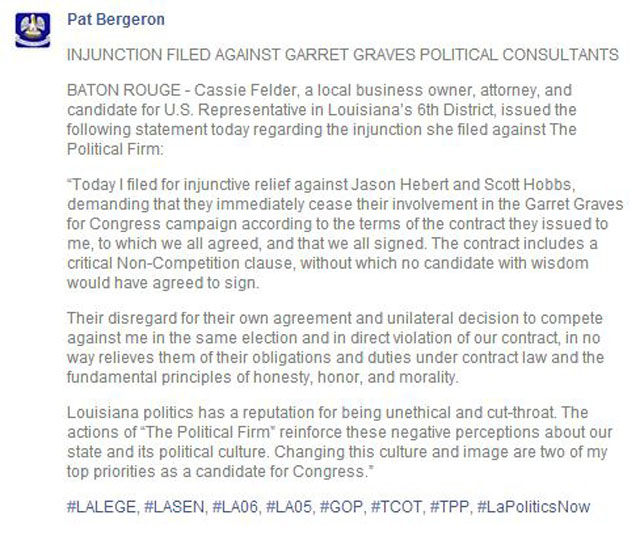 We’re not going to get into a legal analysis of the non-compete business. This isn’t a legal analysis site. Suffice it to say that judges who will grant one candidate an injunction against another candidate depriving the latter of campaign staff in the midst of a campaign are relatively few and far between; it borders on the bizarre to think that’s going to happen.

And speaking of bizarre, today I got a call from some woman from some law firm in Baton Rouge representing herself as an attorney for the Felder campaign, and that she needed to have a talk with me about an important matter that might head off litigation.

Let’s just say my response to that was dismissive.

And then, this afternoon, a Facebook post from Matt Beeson. Matt Beeson is Cassie Felder’s husband and de-facto Social Media Director for her congressional campaign…

So now the Felder Plaintiff Circus-cum-Congressional Campaign is rattling its saber because they didn’t like our stance on their lawsuit against Hobbs and Hebert.

And threatening a libel suit.

To win a libel suit you have to show that what they said about you is false, that you suffered real damage as a result, and that the statement was made without adequate research into whether it was true. To win a libel suit as a public figure – and guess what, a congressional candidate, even a lousy one, is a public figure – you have to prove actual malice was behind the statement. And in this case malice means proving the statement was made with the intent to do harm or with reckless disregard for the truth.

Everything we said in characterizing Cassie Felder’s campaign as a way to have a good time on somebody else’s dime comes from looking at her FEC disclosures. Truth is a defense in a libel suit. And when you raise $32,000 in three months as a congressional candidate and spend $2250 of it on a condo in Panama City, $2000 of it on hotels, event registration and expensive dinners in New Orleans for the Republican Leadership conference, $329 of it at a BBQ place in Austin, $266 of it at a Smith & Wollensky in Washington, $1400 on airfare to Phoenix and so on – all of it outside the district you’re running in, you’re going to have a difficult time proving as libelous the statement that your campaign looks like an expensive and fun hobby rather than a real campaign.

Particularly when the entire point of going through all those expenses was that when Hobbs wrote Felder the “Dear John” letter telling her he and Hebert were splitting from her campaign, he said that they felt like the campaign was a hobby rather than a real Congressional run like they’d signed on for. That was Hobbs’ impression; we looked at the FEC disclosures after he and Hebert had taken a walk and doggone it if we didn’t come to a similar conclusion.

It’s called an opinion, based on research. You don’t really get to sue people for having one about your campaign when you’re running for office.

So I’ll make Felder an offer. If she wants to write a guest post at the Hayride explaining why all the food and travel and Mardi Gras balls were a legit campaign expense and why she’s an honest-to-God serious candidate for Congress, she’s welcome to do so and we’ll gladly publish it. We like a circus around here once in a while; it’s good for traffic.

But if she’s not interested in that, then by all means she’s welcome to start another circus.

Just know that if you do, we’re going to have a swell time milking this disaster for all the web traffic we can. Hell, I might even get an American Spectator column out of this. “Can Cassie Felder Sue Her Way To Congress?” might make a hum-dinger of a headline.

Remember what Mark Twain used to say? Never wrestle with a pig; you get dirty and the pig likes it.

And by the way, the Louisiana Code of Civil Procedure has something fun in Section 971. It reads as follows…

A.(1)  A cause of action against a person arising from any act of that person in furtherance of the person’s right of petition or free speech under the United States or Louisiana Constitution in connection with a public issue shall be subject to a special motion to strike, unless the court determines that the plaintiff has established a probability of success on the claim.

(2)  In making its determination, the court shall consider the pleadings and supporting and opposing affidavits stating the facts upon which the liability or defense is based.

(3)  If the court determines that the plaintiff has established a probability of success on the claim, that determination shall be admissible in evidence at any later stage of the proceeding.

B.  In any action subject to Paragraph A of this Article, a prevailing party on a special motion to strike shall be awarded reasonable attorney fees and costs.

C.(1)  The special motion may be filed within ninety days of service of the petition, or in the court’s discretion, at any later time upon terms the court deems proper.

(2)  If the plaintiff voluntarily dismisses the action prior to the running of the delays for filing an answer, the defendant shall retain the right to file a special motion to strike within the delays provided by Subparagraph (1) of this Paragraph, and the motion shall be heard pursuant to the provisions of this Article.

(3)  The motion shall be noticed for hearing not more than thirty days after service unless the docket conditions of the court require a later hearing.

D.  All discovery proceedings in the action shall be stayed upon the filing of a notice of motion made pursuant to this Article.  The stay of discovery shall remain in effect until notice of entry of the order ruling on the motion. Notwithstanding the provisions of this Paragraph, the court, on noticed motion and for good cause shown, may order that specified discovery be conducted.

That’s what’s known as an anti-SLAPP statute, and it’s designed to kill frivolous lawsuits aimed at chilling political speech. SLAPP stands for “Strategic Lawsuit Against Public Participation,” and it’s a particularly rotten form of intimidation. Lots of states around the country have passed statutes like this one to keep the Cassie Felders of the world from filling up the court dockets every time somebody criticizes them; we happen to live in one.