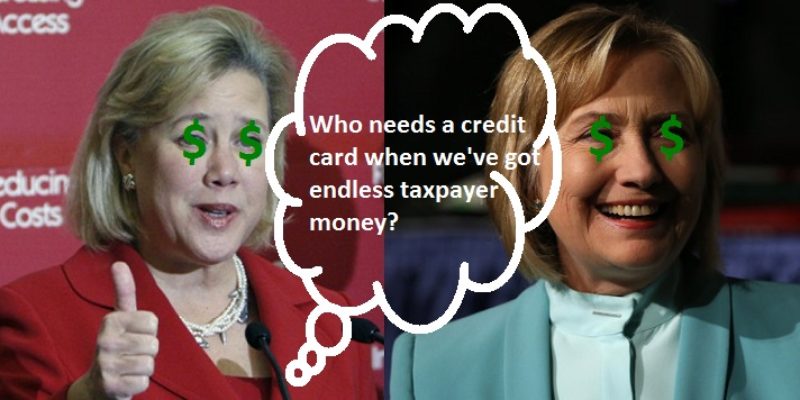 Sen. Mary Landrieu (D-LA) and former Secretary of State Hillary Clinton have at least one thing in common: They are Washington elitists who enjoy spending other peoples’ money, specifically the American taxpayer.

Landrieu, who enjoys a luxurious lifestyle in Washington D.C., has a habit of spending taxpayer dollars for her and her staff’s own benefit.

Most recently, Landrieu cost taxpayers $47,000 for her taxpayer-funded private flights, just in 2013 alone. One of the trips was simply so that Landrieu could get a round-trip from New Orleans to Lake Charles. The report does not include Landrieu’s private plane rides that she took around the country at the expense of taxpayers.

And that’s not all.

Since 2011, Landrieu has cost taxpayers $46,000 to take her staff on retreats, which included a two-day trip including a two-day to a “luxurious” hotel in Annapolis, MD.

The staff stayed at the Loews Hotel, which features “luxurious suites decked out in nautical style,” and is described as the “ultimate in Chesapeake Bay lodging.” According to the records, staff also attended a training conference during the retreat, which cost $2,871.02 in registration fees.

Back in 2011, Landrieu held her staff’s retreats in Washington D.C. and New Orleans. Taxpayers got billed for Landrieu’s stay at the International House, a Washington hotel, beginning on Feb. 22. This trip totaled $20,124.80, including $18,720.32 for per diems and $1,404.48 for transportation for herself and the staff. Landrieu’s office also spent $2,368 in taxpayer money to go to New Orleans on Feb. 24.

Since April 2011, Landrieu’s office has cost taxpayers $8,193,542.67. Most of that money goes towards transportation, per diems, and salaries for staffers. Landrieu has a staff of about 45, costing taxpayers $1.2 million.

Landrieu has alike been frivolous with taxpayer money.

Back in 2012, when Landrieu was Chairwoman of the Senate Small Business Committee, 10 cupcake shops across the country were given more than $2 million in loan guarantees thanks to the Louisiana Democrat. Under Landrieu’s leadership, taxpayers are on the hook for the loans if the businesses fail. To set up and finance the loans, taxpayers have already paid out $19,935.1049. None of the 10 cupcake shops were even in Louisiana.

Hillary Clinton, like Landrieu, knows a thing or two about spending money that is not hers.

Though Clinton left her job as Secretary of State back in Feb., taxpayers are footing the bill for her “Hard Choices” book tour which was just a few months ago, costing $55,000 in travel expenses.

The expenses included a $3,668 charge for her to enjoy a single night’s lodging in a suite at the posh Four Seasons George V hotel in Paris.

That rate corresponds to the cost of a suite with a ‘large and superbly appointed marble bathroom,’ a ‘deep soaking tub,’ ‘sparkling chandeliers’ and ‘elegant period furniture,’ according to the Four Seasons website.

Clinton was not travelling on official United States government business, yet taxpayers will be on the hook for $5,100 in rentals so that the former First Lady could enjoy three Mercedes-Benz executive limousine vans in Berlin. At the same time, rental cars for Secret Service agents cost taxpayers $11,291.

Clinton and her husband, former President Bill Clinton, have been criticized for claiming to be “dead broke,” even though the couples’ post-White House lifestyle is costing taxpayers $944,000, just in 2014 alone.

Landrieu is facing a tough re-election this November, battling Rep. Bill Cassidy (R-LA) for the seat. Meanwhile, Clinton is eyeing a run for the presidency in 2016, though being criticized for being out-of-touch.