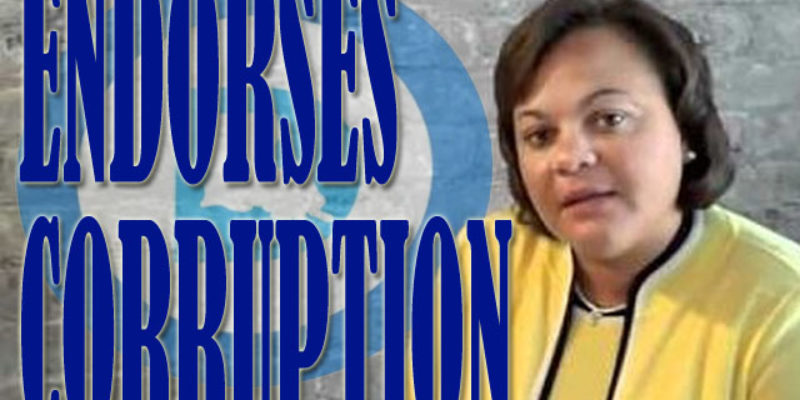 Their position is that it’s acceptable to send known criminals…to CONGRESS.

“Our governing body has voted overwhelmingly to endorse Governor Edwin Edwards in his bid to represent the Sixth Congressional District of Louisiana,” said Louisiana Democratic Party Chair Karen Carter Peterson. “We are proud to feature a slate of candidates that represents the Louisiana Democratic Party’s illustrious past and our proven present. We encourage voters to check their registration before the deadline on October 6 to ensure they are ready to ‘geaux’ vote this fall for the strong Democratic candidates running in races from school board to Congress.”

“I am pleased to have this and other endorsements from groups that are helping people who have an interest in promoting a better life for our nation and the district,” said Gov. Edwin Edwards. “I appreciate the vote of everyone because I am going to serve everyone.”

“The Sixth Congressional District is more challenging terrain for Democratic candidates since it was redrawn in 2011,” said Louisiana Democratic Party Vice Chair Shane Riddle. “However, with the outpouring of support that Governor Edwards has received, contrasted with the cluttered Republican field, Democrats see a path to victory. I am impressed with the team and the energy coming from Team Edwards — and I have often been told to never count out Edwin Edwards.”

If you endorse criminality, does that not signal your own criminality?

We don’t expect an answer from the Louisiana Democrat Party. The question is too uncomfortable.

The amazing thing about this is the Democrats know damn well Edwin Edwards can’t win that race. They know Bill Cassidy’s seat is not going to go Democrat this fall. “Cluttered Republican field” and so on, whoever is in the runoff with Edwards will wipe the floor with him. It doesn’t matter whether it’s Garret Graves, Paul Dietzel, Dan Claitor, Lenar Whitney or whoever – any of them would bury him in a head-to-head race.

They know Edwards can’t win, and there are other Democrats in the race. They have perfectly legitimate “outs” here; it’s not necessary to endorse Edwin Edwards and bring upon themselves the shame and ridicule inherent in such a decision. They’re doing it because they think Edwards can turn out the black vote in the 6th District and thus help Mary Landrieu in December. Plain and simple; they think Edwards can do it, and the Democrats in the race who are not coming off a stretch in federal prison on public corruption charges – Peter Williams and Richard Lieberman, by name – can’t.

So they’ll endorse a criminal in order to keep one of their candidates viable for another office. That he’s a criminal doesn’t bother them in the least. Wonder why that is.

We saw how Democrats governed this state for 100 years, and rampant criminality was the norm. And they’re still endorsing criminals. Maybe somebody can explain how this endorsement is legitimate politics and not at the very least a looking of the other way at public corruption, but we doubt it.

If there are any Democrats in this state who don’t support criminal conduct in public office, they ought to make a run at Peterson’s chairmanship of the Louisiana Democrat Party. Until that time, we’re going to call that a criminal syndicate disguised as a political party.

UPDATE: In case you’re interested in knowing who the people are who “overwhelmingly” voted to endorse a man who spent eight years in federal prison on public corruption charges for Congress, here is the roster of the Louisiana Democrat State Central Committee…

UPDATE: We would be remiss in not giving attribution to the genesis of the characterization of the Democrat Party as a criminal organization. That came from a wonderfully-entertaining 2009 National Review piece written by Michael Walsh, under the nom de plume David Kahane, containing this now-legendary passage…

In other words, stop thinking of the Democratic Party as merely a political party, because it’s much more than that. We’re not just the party of slavery, segregation, secularism, and sedition. Not just the party of Aaron Burr, Boss Tweed, Richard J. Croker, Bull Connor, Chris Dodd, Richard Daley, Bill Ayers, the Reverend Jeremiah Wright, and Emperor Barack Hussein Obama II. Not just the party of Kendall “Agent 202” Myers, the State Department official recruited as a Cuban spy along with his wife during the Carter administration. Rather, think of the Democratic Party as what it really is: a criminal organization masquerading as a political party.

We’re using the word syndicate, because here in Louisiana Democrat corruption and mafia-style organized crime have gone together like red beans and rice since Sherman was LSU’s president. But it’s the same thing. The open endorsement of Edwin Edwards, which is so noxious that it’s even too much for Bob Mann to stomach, surely proves Walsh’s designation to all but the most slavish devotees of the Old School in Louisiana politics.

Interested in more national news? We've got you covered! See More National News
Previous Article So – This Maness Cat Is A Slave On The Politically Correct Plantation, Huh?
Next Article Lots Of Mixed Messages In This Video…