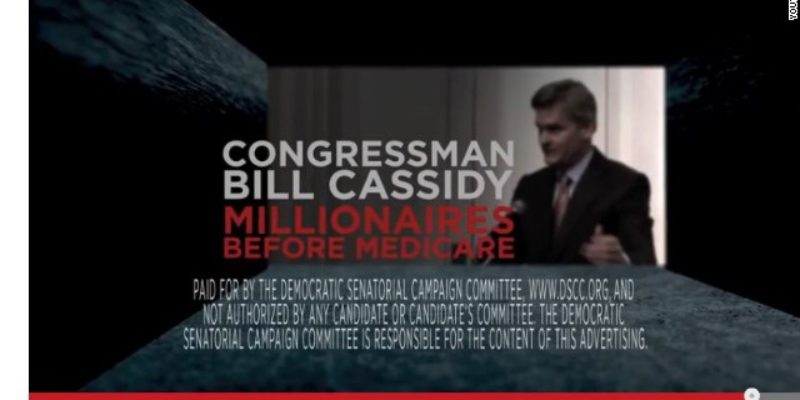 A new attack ad by the Democratic Senatorial Campaign Committee (DSCC) portrays Rep. Bill Cassidy (R-LA) as a friend to the wealthy and rich, while sticking it to senior citizens.

But, there’s just one problem: It’s not exactly the truth. First off, here’s the ad.

And now the other side of these claims.

The ad portrays Cassidy as a friend to the wealthy, rich and fabulous. However, Cassidy is best known in the state as a doctor who has treated low-income and uninsured patients in the charity hospital system for about 30 years. Sen. Mary Landrieu (D-LA), Cassidy’s incumbent opponent, is a millionaire on the other hand. She currently lives in a $2.5 million Washington DC mansion that she and her well-connected husband, Frank Snellings, built.

Next, the ad claims Cassidy wants to gradually raise the Medicare eligibility age to 70, which is true. Again, however, it leaves out the fact that Landrieu herself  supported the “Simpson-Bowles deficit reduction commission’s plan, which itself proposed raising the retirement age to 69 for Social Security. Landrieu and the other signatories specifically said they ‘commend’ the proposal’s Social Security reforms.”

The ad also portrays Cassidy as a congressman looking to gut Medicare by privatizing it via a voucher program, citing his support for the Paul Ryan budget. Landrieu, though, cast the deciding vote for Obamacare, which then cut $716 billion from Medicare to pay for the healthcare overhaul. This is the biggest cut ever to Medicare in history. But don’t expect Obamacare to ever come up during a pro-Landrieu ad.