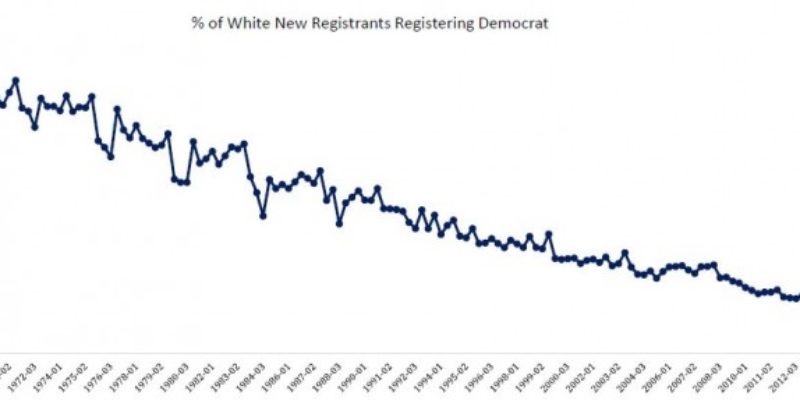 The conventional wisdom you’ll see in a number of quarters, including here at the Hayride not once but twice this week, albeit with a dissenting opinion here, has been that the turnout numbers in the black community in the early-voting period which ended Tuesday were impressive on the scale of a presidential election cycle. The percentage of early voters who were African-American was 32.8 this year, which was more akin to the 33 and 35 percent Louisiana saw in 2012 and 2008, respectively, than the 21 percent in 2010, the last midterm cycle.

Diez, who has emerged as one of Louisiana’s most highly-regarded pollsters and demographers on the Republican side, says the Democrats’ get-out-the-vote effort in the early period might have done as much harm as good.

“Early vote statistics indicate African-Americans are not growing their percent of the electorate as was the case in 2012 and 2008,” he says. “Instead their early vote numbers indicate they are turning out voters who would have otherwise voted on Tuesday.”

“Democrats will need more than slight gains African American community to off-set the massive decline in the number of white Democrats. The bottom line is that the Democrats now have 1 day to do what they could not do in 7 days of early voting.”

Diez says in order to win Landrieu has to get black turnout to levels even the Obama campaign wasn’t able to achieve, and to do that she depends solely on the black community’s “ability to turn out low propensity African-American voters.”

And by analyzing the early-voting data, Diez says that’s not what happened. Instead, the Democrats got a lot of chronic voters to show up early rather than on Tuesday. 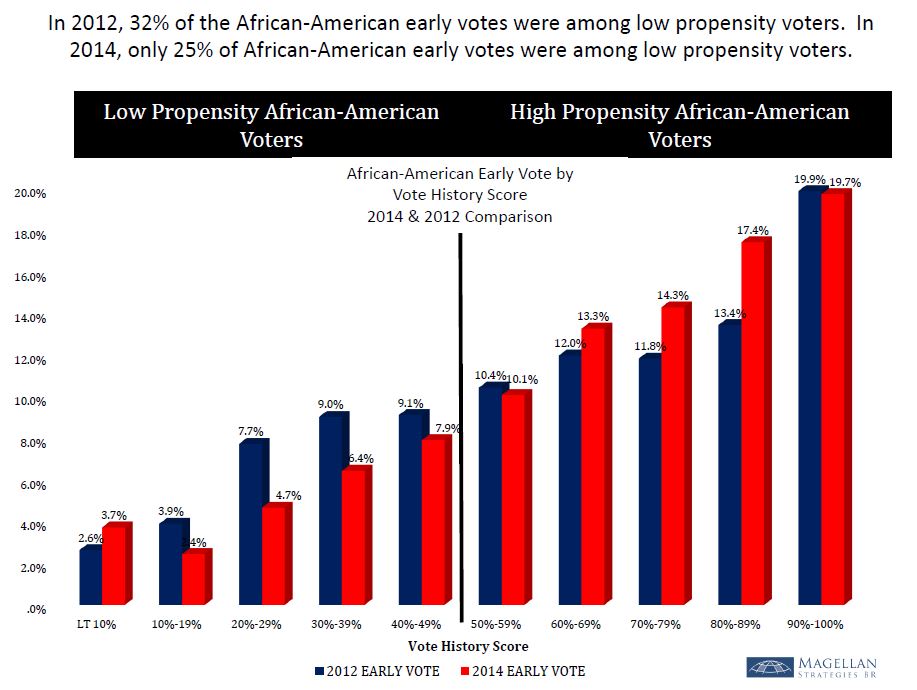 Diez noted that historically there is a higher percentage of African-American voters among the early voting cohort than the overall electorate – in 2008, the 35.5 percent black early-voting sample declined to 29.5 percent among the total electorate, for example, and in 2012 the number fell to 30 percent from 33 in the early voters.

But the real problem the Democrats have in Louisiana is that they simply can’t use a ginned-up black turnout, early or otherwise, to offset the abject disaster with white voters. An eye-popping graph shows how bad things have gotten for the Democrats among newly-registering white voters – since 2008 a mere 15 percent are putting “D’s” next to their names… 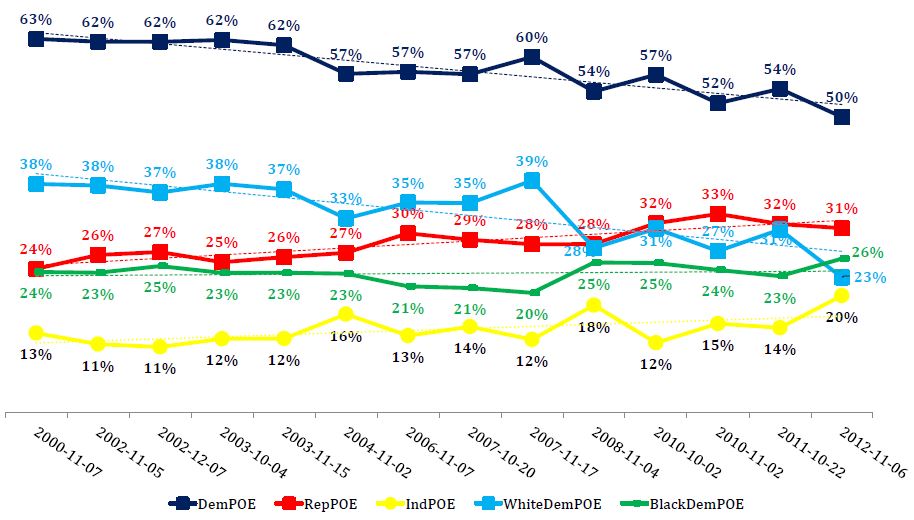 Of course, since 2012 things are only accelerating. In 2012 Democrats were 50 percent of the registered voters. Now they’re at 47 percent and fading.

What this means is that the coalition Democrats used to be able to use to win – monopolistic control of the black vote, plus a sizable chunk of the white vote – has fallen apart. When white Democrats are only 23 percent of the electorate and they aren’t even reliable votes for Democrat candidates, and white voters are 68 percent of the electorate, you’re on the road to being a rump party.

Which is why Landrieu’s trashing that 68 percent yesterday, when the early-voting numbers show she doesn’t have an advantage, only accelerates her party down that road.

Interested in more news from Louisiana? We've got you covered! See More Louisiana News
Previous Article Cassidy On Landrieu’s RaceGate: I Wish She’d Spend More Time On Policy Instead Of Insulting Us
Next Article These 9 Newspapers Ignore Mary Landrieu’s ‘Racist’ And ‘Sexist’ Remarks