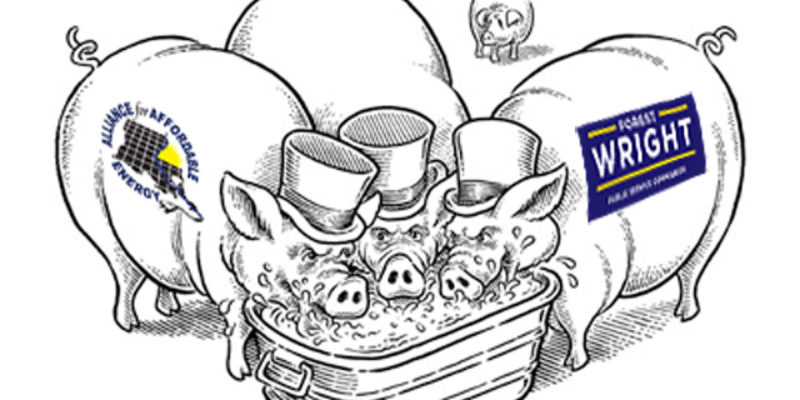 In Louisiana’s Public Service Commission District 1, a race decidedly starved of local attention is garnering an increasing amount of national publicity as a hot contest between incumbent Eric Skrmetta and challenger Forest Bradley- Wright gets even hotter.

The stakes are high in this race since Louisiana is poised for an Industrial Renaissance in the next few years. In the next several years an estimated $100 billion in capital investment in the state’s industrial sector could revolutionize the Louisiana economy – and a consensus exists among political and business leaders that the state’s greatest challenge is providing a skilled workforce to fill all the jobs the burgeoning industrial sector will create.

But research indicates that if Skrmetta doesn’t survive Saturday’s re-election battle, a significant portion of that $100 billion might not materialize.

Here is what voters need to know:

Louisiana is rich in natural resources and has some of the lowest energy rates in the nation. In part because of that cheap electricity – brought on in part by solid management of the Public Service Commission and its regulatory performance in recent years – the state is one of the hottest destinations for industrial site development.

If the challenger, Forest Bradley-Wright, an Oregon native and long-time Democrat who recently changed his party in hopes of winning his second run for PSC, wins the election there is a definitive possibility that Louisiana could lose. The industrial contracts, the income, the jobs, the tax-base and the projects could well move to Mississippi, Texas, Alabama or some other friendlier locale. A small difference in electric rates makes a big difference in cost to an industrial facility, and if Louisiana loses its advantage over other states it can lose more than a few of the planned economic development projects altogether.

The candidates have completely different agendas.  Skrmetta, a conservative attorney, and commissioner of the Louisiana Public Service Commission since 2002, has been a Republican since 1978. It’s estimated that Skrmetta has helped save customers more than $4 billion by refusing requests from public utilities to raise rates – a record which has resulted in Louisiana’s electric rates ranking among the cheapest in America.

Skrmetta has the endorsements of the Louisiana Sheriffs Association, the Republican Party of Louisiana and the Louisiana Association of Business and Industry, U.S. Senator David Vitter and U.S. Reps Steve Scalise and Cedric Richmond.  He maintains that he is the only candidate who can work with the state’s other elected officials to resolve customer issues and protect them from rate hikes. Skrmetta is also touting his leadership in preparing for the coming fight with the Obama Environmental Protection Agency’s new carbon-emission regulations, which have been estimated to cost Louisiana ratepayers a potential 40 percent increase and wipe out the state’s expected industrial expansion.

Forest Bradley-Wright, previously ran for the Public Service Commissioner’s spot as a Democrat in District 2 in 2012. Wright finished second in a five-way race, garnering only 21 percent of the vote (Republican Scott Angelle won in the primary with 54 percent). Thus on May 14, Wright switched parties to the GOP in preparation for this year’s run. Wright does not live in District 1, but rather in District 3 where New Orleans Democrat Lambert Boissiere is PSC Commissioner.

Wright is a self-proclaimed “energy policy consultant” born in Omaha, Nebraska who was employed by The Alliance for Affordable Energy, most recently as Utility Policy Director.  He is the owner and operator of a private company called EcoPark LLC which has a couple of descriptors as a “Real Estate land-division” company and as a company which does “green cleaning, has containers,” and other things in addition to real estate. Exactly what the company does is a bit murky.

Besides switching parties to attempt a win at a seat on the PSC and run in a district in which he does not reside, he has much in common with Mary Landrieu. His staff are Democrats, and several members of his inner circle are former Landrieu campaign staffers.  Wright’s primary fundraiser is a long-time Democratic operative who has raised money for many of Orleans Parish democrats.

This is important since he claims to want transparency as commissioner of the Louisiana Public Service Commission yet it is fairly apparent that he has Democrat written all over him which ties him to the Obama Administration and to Senator Mary Landrieu.  This administration aims to cut carbon emissions to a level so low that 55 power plants have been shut down around the country.  The industrial projects set to come to Louisiana could not operate under these stringent guidelines.

Further, Wright is pushing solar energy as a solution to the state’s future power needs and his campaign is heavily funded by the solar industry – both in straight campaign donations and in PAC dollars spent on his behalf. Solar-funded PAC’s spent some $200,000 on Wright’s behalf attacking Skrmetta in the primary, and word leaked this week that those same PAC’s will unleash an $80,000 television buy hitting Skrmetta in the final days of the runoff election.

The problem with Wright’s agenda for “Alternative Energy” in a state such as Louisiana is that wind and solar power aren’t competitive with the abundant and local fossil fuels available to Louisiana’s utilities. Savings powerful enough to make strides over the supply side (energy companies) and their efficiency continues to be underestimated or ignored.  And in this district, where an estimated 30% of residential and commercial customers are on a payment plan with the energy company, few can afford to pay the typical $25,000 to initially invest in solar panels and to wait for the 80% federal tax break.

The solar companies have not made clear to many potential customers that in many cases the solar panels are “leased” instead of “purchased” which places a lien on properties.  The stapling of the solar panels onto structures also deems homeowners’ roof warranties invalid.  With inclement and ever-changing weather in the Gulf South, who is going to fix the problems that arise from storm damage in these cases?

The bottom line is that conservative values mean fiscal responsibility and to give the wealthy the privilege of saving on their electric bills as The Alliance for Affordable Energy and Forest Wright aim to do, the middle class and the poor are going to foot the bill for the savings of those who can afford “alternative energy,” and those whose homes and businesses are in the geographical position to utilize such energy.

Wright may have changed his party to Republican to try to win his second attempt at a seat on the PSC, but he is not being transparent with his agenda. He wants to get special interest funding, have the wealthy save energy and sell it back to the power company at government-mandated retail rates which will inevitably cause electric rates to increase across the board. It’s a racket taking advantage of the middle class and poor, who can least afford to bear the cost of subsidizing the crunchy proclivities of the affluent.

In the end, Wright’s campaign is more transparent than he’d like it to be. A small amount of research shows that he’s anything but the expert in energy policy he purports to be, brings an irresponsible and risky agenda into Louisiana’s enviable status quo, has conducted a thoroughly dishonest campaign in an effort to deceive the 1st District’s voters and simply can’t be trusted with a seat on the PSC – especially when Louisiana is poised for staggering economic growth based on the success of the incumbent commissioner.

Interested in more national news? We've got you covered! See More National News
Previous Article The Other Side Of The Little Gypsy Story
Next Article AFTERBURNER: What Happens If The Lights Go Out?