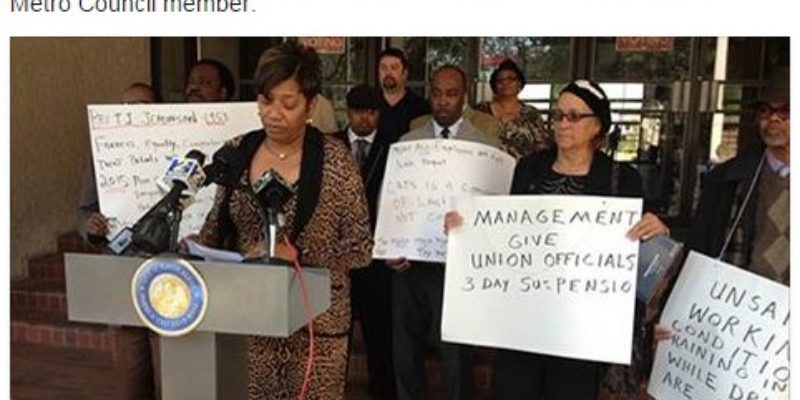 Baton Rouge metro Councilwoman C. Denise Marcelle is jumping into the fracas that is the Capital Area Transit System again. This time she is calling for the head of Bob Mirabito, CATS CEO.

An article in The Advocate has this: “Baton Rouge Metro Councilwoman C. Denise Marcelle, who has previously been one of the city bus system’s most vocal supporters, held a news conference Thursday calling for the resignation of CATS CEO Bob Mirabito for what she described as lack of leadership, mistreatment of employees and failure to deliver on bus services promised in the 2012 CATS election.”

Mirabito has been a lightening rod for mostly positive change at CATS since he was brought on in 2013. With no transit experience (which is a resume enhancement in this authors opinion) he has managed to put an organization that was plagued with mismanagement from its former CEO (Bryan Marshall)  and board on a firm operational footing. Mirabito has addressed a lack of internal financial controls at CATS, overseen route expansions and helped oust board members who were either stealing from CATS (Thanks to a tip from Louisiana Strong) or failing to provide oversight for the organization. His record has not been perfect, click here for a story on the failed roll out of the Route Shout GPS system, but CATS is in a much better place now with a great deal of the thanks going to Mirabito’s leaderhip.

Marcelle’s criticisms come as a response to the disciplining of some of her union pals. Last week, Union officials organized protests outside of the CATS headquarters claiming unsafe working conditions because of outdated buses. Union officials were subsequently suspended by Mirabito for protesting on the clock when they should of been serving the tax payers of East Baton Rouge Parish. Marcelle was also upset that she was not granted a seat at the table for the negotiations meeting despite not being one of the Council Members who has a seat on the CATS Board. 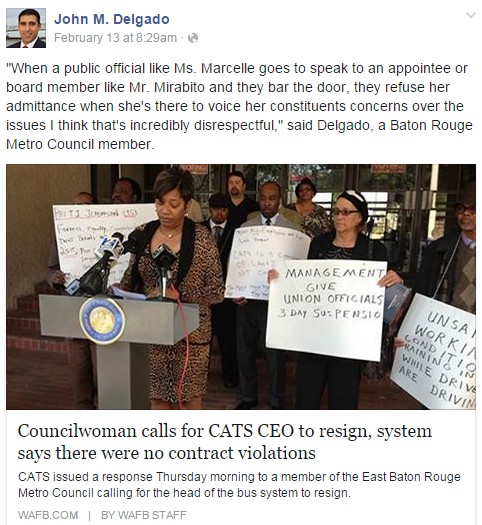 “CATS said there were no contract violations, contrasting what Marcelle and the employees at city hall are saying.

Marcelle says if Mirabito does not resign, she and her supporters will ask the board at CATS to take action.

Mirabito took over a struggling CATS two years ago and many people credit him for keeping the bus system afloat.”

A discussion about whether or not EBR Parish needs a government subsidized bus system can be had but what is clear is that CATS is in a much better place now than under past leadership. Marcelle, many would argue, is one of the most liberal members of the Council so it’s no surprise that she opted to stand with her Union allies. What is surprising is that she does so with so much progress at CATS staring her in the face.  Moves by Marcelle and Union officials seem to suggest a desire to go back to the “Good Ol’ Days” of CATS where contracts were able to be steered (nola.com) and you could even get your cable bill paid if you were down on your luck for a few months.