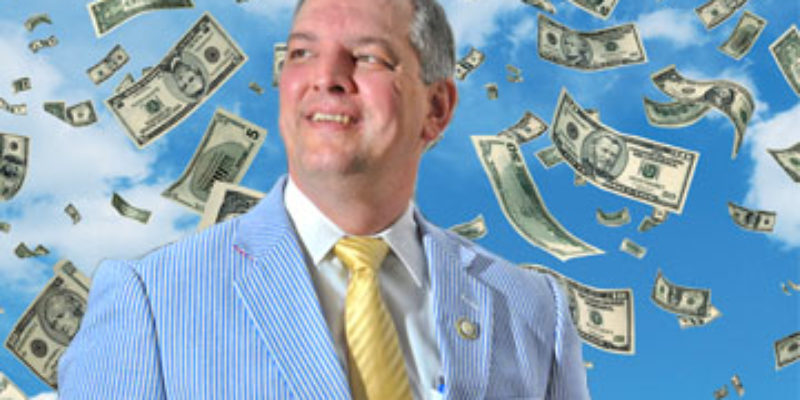 With all Louisiana gubernatorial candidates having publicized, if not filed, their fundraising totals up until the end of last year, the results narrow state Democrats’ options considerably in this contest.

All four who have announced their intentions to run for this – Sen.David Vitter, Lt. Gov. Jay Dardenne, Public Service Commissioner Scott Angelle, and state Rep. John Bel Edwards – claim or demonstrate they had raised over a million bucks, but with Vitter lapping the field in cash on hand. The only Democrat, Edwards, was the only one not to make an assertion or to file that he has $1 million or more hand.

That Edwards apparently collected the least and has relatively less on hand than the others reveals that there isn’t a great deal of confidence about his bid among Democrats. As the only declared Democrat in the race – for over a year now – a bid thought more seriously should have attracted more money. Then again, that he did suck in at least a million smackers shows neither is a trivial candidate and could be competitive enough at least to make the inevitable runoff.

And this, along with the more impressive fundraising totals of the Republicans – all appear to have outraised him, despite their splitting the field three ways and Angelle getting in only towards the end of the year – creates a dilemma for Democrats. While potential runoff material. Edwards shows no signs he can defeat any of the three heads-up, yet who could they offer that could do any better?

One oft-discussed nominee for that role, New Orleans Mayor Mitch Landrieu, seems unlikely. He carried a large amount of holdings into last year’s mayoral reelection campaign, and promptly spent most of it on a contest that was not that close. Later, his sister herself lost a race not very close for reelection as senator, indicating how at the statewide level electoral dynamics have moved decisively against a candidate of his ideology (and name). With relatively little money available, Landrieu now seems content to complete his final term and then ponder where to go in 2018.

Another Democrat hope of the past seems no better than Edwards at this time. Public Service Commissioner Foster Campbell turned in brutal results in 2007, capturing just a sixth of the vote while Gov.Bobby Jindal swept more than half. His signature issue, a punitive tax on oil processing, has lost its allure with more emphasis now on natural gas production and a plunge in prices. And while with his wealth he could finance his own campaign to a degree (and with his roughly $300,000 in his campaign account), he also would be the oldest governor ever inaugurated, which runs counter to the image that vigorous leadership must tackle Louisiana’s increasingly unsound fiscal structure. If his time ever seemed to be here, at present it now appears gone.

The great Cajun hope for Democrats presently seems to be Lt. Gen. (ret.) Russel Honore, who first made a name for himself in the aftermath of the hurricane disasters of 2005 with his no-nonsense approach to stabilization of the affected area. He has become more controversial since by providing voluntary leadership to an environmentalalist group called the Green Army that sometimes can present itself as a legitimate guardian of environmental interests but at other times veers off into extremism courtesy of a common tactic of the left that fronts environmentalism to cloak a redistributionist agenda, such as championing the money grab made by the South Louisiana Flood Protection Authority-East’s lawsuit against oil companies recently laughed out of federal district court.

Further eroding any appeal that he may have (he is assumed if he runs for office to run as a Democrat) is that he’s never held a policy-making position before. Running a brigade does take administrative skill, but the only policy experience he appears to have, besides pronouncements on the environment, is in disaster management, which is useful but rarely needed, and in defense policy, which is wholly unneeded as a governor. Being black, he might stimulate marginally black turnout and would require fewer dollars to mount a campaign, but he has none for that purpose at all available and little crossover attraction to the state’s conservative majority.

Add to this that Edwards, despite these funds numbers, probably is less likely as a result of their reporting to take another option at the statewide level, such as (being he is a lawyer) Attorney General. That’s because former Rep. Jeff Landry turned in some big numbers in his quest for that race, the incumbent Atty. Gen. Buddy Caldwell still is there, and maybe Treasurer John Kennedy will get in it. He has about as much chance winning that contest as governor, and as Democrats really need a credible candidate at the top of the ticket (and to send Edwards into the AG race may diminish the chances of the party’s fallback option, former Democrat Caldwell keeping Landry out, might torpedo that tactic), pressure will be on him to stay in. They simply can’t afford to offer up a cipher as they did in 2011.

So the Democrats’ bench really is thin at the moment, leaving Edwards probably their best option. Which isn’t much option at all, but when the state party has moved so far to the left that it has discredited its formula of social conservatism to mask liberalism on other issues as a path to victory, you take what you can get.

Interested in more national news? We've got you covered! See More National News
Previous Article LOL! Apparently Some Tourists Come To Mardi Gras To Burglarize
Next Article Kennedy And Nungesser Weigh In On The 2015 Money Race